Al-Ahram, Al-Gomhurriya and Rose el-Youssef all lead with news on the amendments to the social insurance law, highlighting new benefits for pensioners. Al-Ahram reports on ministerial meeting held yesterday, chaired by Prime Minister Ahmed Nazif. The ministers of finance, legal affairs, and social solidarity also attended. Following the meeting, a cabinet spokesperson announced that the project to amend the social insurance law aims to assist “marginalized families and needy classes.” The spokesperson also announced the formation of a new fund for social care services for eight million pensioners.

Al-Gomhurriya reports on Finance Minister Youssef Boutros-Ghali’s announcement that, to insure its independence, the new fund’s board of directors will include three pensioners. It will receive most of its financial support from the state’s budget, as well as contributions from large pension owners and returns from the social insurance fund’s investments, according to Boutros-Ghali’s statement.

Al-Wafd leads with the headline: “Jobs stolen and turned into elections bribes–Governors and National Democratic Party representatives stole 34,000 jobs!” The paper reports that differences between the Ministries of Education and Administrative Development, and the local administration for the placement of graduate students, revealed that over 34,000 jobs intended for teachers with temporary contracts were “leaked” to relatives and acquaintances of certain governors, parliament and Shura council members, as well as other members of local councils. The “irregularities,” according to Al-Wafd, were revealed by the Ministry of Administrative Development’s services center, as part of their follow-up reviews of their 2008 and 2009 plans.

The protests of the 6 April Youth Movement–which calls for amendments to Articles 76, 77 and 88 of the Constitution and the abolition of the Emergency Law–receives plenty of coverage today, with reports of the demonstrations being contained and thwarted running on the front pages of almost all the major newspapers.

Al-Ahram reports that Cairo’s Tahrir square witnessed a limited demonstration, which opposition parties and the banned Muslim Brotherhood did not attend. The opposition parties, according to Al-Ahram’s report, “intensely refused” to participate in the protest. The refusals mentioned included those from Refaat el-Saeed, head of the Tagammu Party and Sameh Ashour, head of the Nasserist Party, as well as the leadership of the Muslim Brotherhood.

Rose el-Youssef writes that three years after its formation, and following a full year publicizing the anticipated protest, the 6 April Youth Movement’s “illusions were shattered” when it failed to rally its members to demonstrate in front of the Shura Council, in universities, and public squares across the Egypt’s governorates. The report states that no more than 70 members of the movement’s members demonstrated, and that these members were angered by the presence of a few Muslim Brothers. The movement’s members accused the Brotherhood members of “delinquency” and taking advantage of the media presence to “ride the [media] wave” for their own interests, according to the report.

Al-Ahram reports that Cairo security forces succeeded in containing the situation and dispersing the protesters by intensifying its presence under the supervision of General Ismail el-Shaer, assistant to the minister of interior. Al-Shorouq, meanwhile, reports that State Security turned downtown Cairo into something that resembled “a military barracks,” with security forces spread from Tahrir Square to the parliament building’s entrance off Qasr el-Aini Street. The report states that male and female demonstrators were assaulted with electric shock guns, which led to altercations between protesters and security forces, and the arrest of over 80 demonstrators.

Al-Ahram, Al-Akhbar and Al-Wafd also all run with front-page reports on eight explosions in Baghdad over the past few days in which 45 people were killed and over 140 injured. Al-Akhbar reports that an armoured car killed at least six people in a market in west Baghdad, and additional explosions leveled seven homes, bringing the death toll over the past five days to over 90. 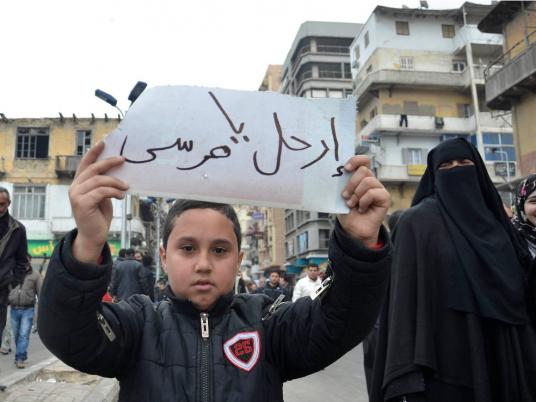