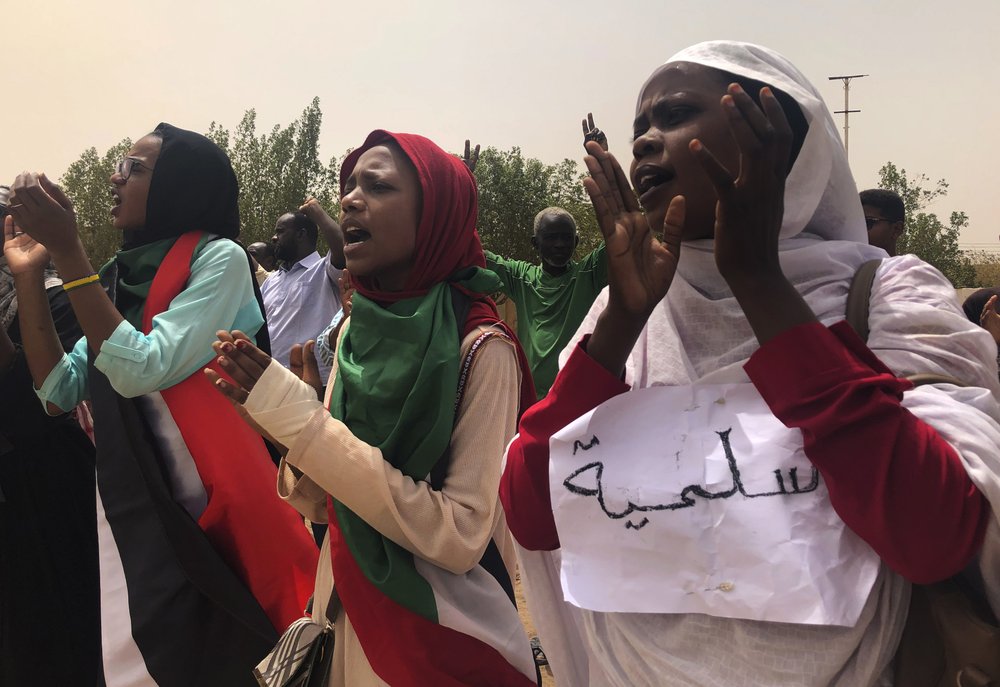 CAIRO (AP) — Amnesty International on Thursday urged Sudan’s new transitional government to deliver on popular demands for sweeping change as the country marked the first anniversary of mass protests that led to the ouster of former president and longtime autocrat Omar al-Bashir.

A year ago, the first rally was held in Sudan to protest the soaring cost of bread, marking the beginning of a pro-democracy movement that convulsed the large African country. That led, in April, to the toppling by the country’s military of al-Bashir, and ultimately to the creation of a joint military-civilian Sovereign Council that has committed to rebuilding the country and promises elections in three years.

The anniversary drew teeming crowds to the streets in several cities and towns across the country. In the morning, a train packed with exuberant demonstrators, clapping and chanting, arrived in the capital, Khartoum, from the northern city of Atbara, the birthplace of the uprising.

“The transitional authorities must honor the commitments they made to restore the rule of law and protect human rights,” Seif Magango, Amnesty’s deputy director for East Africa, the Horn and the Great Lakes said in a statement. “The Sudanese people deserve nothing less.”

The global rights group said Sudan’s new government has shown positive signs of progress during its fragile transition to democracy, citing the repeal of a decades-old Islamist moral policing law and dissolution of the former ruling party — moves that have helped the Sovereign Council distance itself from al-Bashir’s disgraced rule.

Over the weekend, a court in Sudan convicted al-Bashir of money laundering and corruption, sentencing him to two years in a minimum security lockup. The image of the former dictator in a defendant’s cage “sent a strong message, on live TV for all of Sudan to see, that we are on the route toward justice,” said Sarah Abdel-Jaleel, a spokeswoman for the protest organizers.

But in the view of protesters, Abdel-Jaleel added, “al-Bashir has not been held to account.”

The deposed ruler is under indictment by the International Criminal Court on far more serious charges of war crimes and genocide linked to his brutal suppression of the insurgency in the western province of Darfur in the early 2000s. The military has refused to extradite him to stand trial in The Hague.

Amnesty also called on the new government to hold security forces accountable for killing scores of people in their efforts to stifle protests against military rule, especially those behind a deadly crackdown on a huge sit-in outside the military headquarters in Khartoum in June. Since last December, nearly 200 protesters have been killed.

The government recently appointed independent judges to oversee investigations into the killings, a major achievement for the protest movement. But even the most high-profile cases have shown no signs of official action, said Amnesty’s Sudan researcher Ahmed Elzobier. Families still find it very difficult to bring cases against security officers, he added.

Sudan is under heavy international and regional pressure to reform. With the economy on the brink, the new government has made it a mission to get Sudan removed from the U.S. list of state sponsors of terrorism so that it can attract badly needed foreign aid.

“We’re looking at a deep state that for thirty years has been plagued by corruption and economic crisis,” said Abdel-Jaleel. “But if the nation is given an opportunity to achieve democracy and development and peace, that will be an achievement for the world, not just for Sudan.”

Image: Sudanese protesters shout slogans as they march during a demonstration against the ruling military council, in Khartoum, Sudan, on Sunday, June 30, 2019 (AP Photo/Hussein Malla)