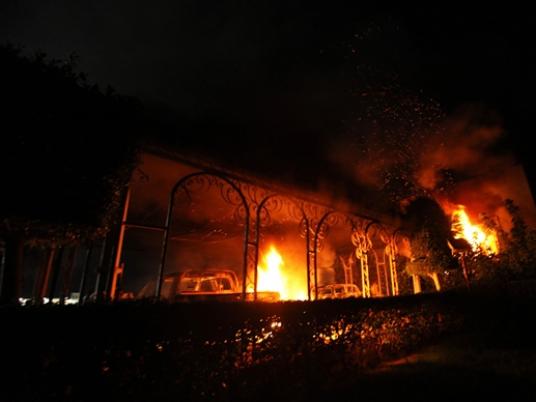 There have been conflicting accounts of the events which led to the death of four US diplomatic staff, including Ambassador Chris Stevens, in Benghazi, on Tuesday night. Egypt Independent spoke to eyewitnesses and consulted published sources in an attempt to reconstruct what happened, and why.

Benghazi journalist Khaled al-Tourghani says mentions of the film on social networking sites prompted up to 1,000 people to gather outside the US Consulate around 9 pm Tuesday. However, other accounts say the protests were more driven by calls from Al-Qaeda to avenge the deaths of its members.

“The guards at the consulate got scared and they shot in the air. This made some abuse the situation, and they attacked the consulate.” Tourgani speculates. “Ansar al-Sharia [a Salafi militia], Salafi groups, and other extremist groups were all there. They fired.”

Al-Arabiya correspondent Mahmoud al-Farjani says, “There was an exchange of fire between the consulate guards and the attackers. There were four to five cars without license plates, with heavy weapons, from semi-official armed groups.”

Officially, all such militias in Libya are part of the army or police force, but in practice they operate under their own authority and follow the instructions of their own militia leaders.

Sofian Kadura, an airline pilot and volunteer security brigade officer who lives in Benghazi, tried to investigate at the time.

“When we tried to get closer to the consulate, we realized that armed Islamist extremists had blocked off the streets. They had automatic rifles, RPGs, and big machine guns mounted on cars. It was obvious they were Islamists due to their long beards. I told them I was part of a security brigade, and asked them to let me through — they refused,” wrote Kadura in an account for France24.

According to a senior US administration official, speaking to journalists on a conference call, the consulate came under fire around 10 pm, Libya time. Fifteen minutes later, according to the official, “the attackers gained access to the compound and began firing into the main building, setting it on fire. The Libyan guard force and our mission security personnel responded. At that time, there were three people inside the building: Ambassador Stevens, one of our regional security officers, and Information Management Officer Sean Smith.

“They became separated from each other due to the heavy, dark smoke while they were trying to evacuate the burning building. The regional security officer made it outside, and then he and other security personnel returned into the burning building in an attempt to rescue Chris and Sean. At that time, they found Sean. He was already dead, and they pulled him from the building. They were unable, however, to locate Chris before they were driven from the building due to the heavy fire and smoke and the continuing small arms fire,” said the official.

Around 11:20 pm, US and Libyan security personnel regained control of embassy grounds.

According to Abdel Moneim al-Hurr, spokesperson for Libya's Supreme Security Committee, the body responsible for governing militias and security forces, police and security units withdrew under the intensity of the attack. The level of involvement of the Libyan security units which sought to defend the consulate is currently unclear.

Who carried out the assault and why?

The group most heavily identified with the armed assaults in media reports is Ansar al-Sharia, a group whose name means supporters, or partisans, of Islamic law. Benghazi locals also attribute a recent attack on the Sufi Mausoleum in Rajma to the group. The group shares a name with Al-Qaeda-linked groups in Mali and Yemen, but its material links to those groups is unclear.

Ansar al-Sharia gave a press conference Wednesday, in which they stated that they were not the only group present at the demonstration in front of the consulate. A spokesperson for the group said that what happened in Benghazi was “a response from the Libyan people for insulting Islam.”

The Omar Abdul Rahman Brigades, understood to share a similar ideology to Al-Qaeda, are also known to operate in Benghazi. The group claimed responsibility for a bomb attack at the US Consulate in Benghazi in June. Noman Benotman of the Quilliam Foundation, which monitors militant Islamist groups, believes it was central to the attack.

“The attack would have taken place regardless of the protest against a movie that insults Islam,” Benotman, who is a former member of the Libyan Islamist Fighting Group, told CNN.

The protests, which took place the same evening as the armed assault, were nominally directed against an amateur film trailer produced by a US resident, seen as insulting to the Prophet Mohamed.

But the Quilliam Foundation believes it is more likely that the armed assault was a response to a video statement released by Al-Qaeda leader Ayman al-Zawahiri to commemorate the 11th anniversary of the World Trade Center attacks of 11 September 2001.

In the video, Zawahiri confirmed the recent killing of his deputy Abu Yahya al-Libi in a US drone strike in June, and called on Libyans to avenge his death.

A press release by the foundation states, “According to our sources, the attack was the work of roughly 20 militants, prepared for a military assault — it is rare that an RPG7 is present at a peaceful protest.” They believe that attackers used the cover of the demonstration to launch their separate attack.

Deputy Libyan Interior Minister Wanis al-Sharif said the attack on the Benghazi consulate was carried out by supporters of the former Qadhafi regime, although the only evidence he offered was that RPGs were used. Such weapons are, however, in the possession of many different groups in Libya.

He also appeared to try to lay blame on the American consulate itself for allowing staff to remain at the embassy. “It was necessary that they take precautions. It was their fault that they did not take the necessary precautions,” Sharif said.

Human Rights Watch condemned the attacks in a statement yesterday.

“Though Libya's recent elections were meant to give its central government new legitimacy and authority, armed groups in Libya have continued to operate with impunity,” it read.