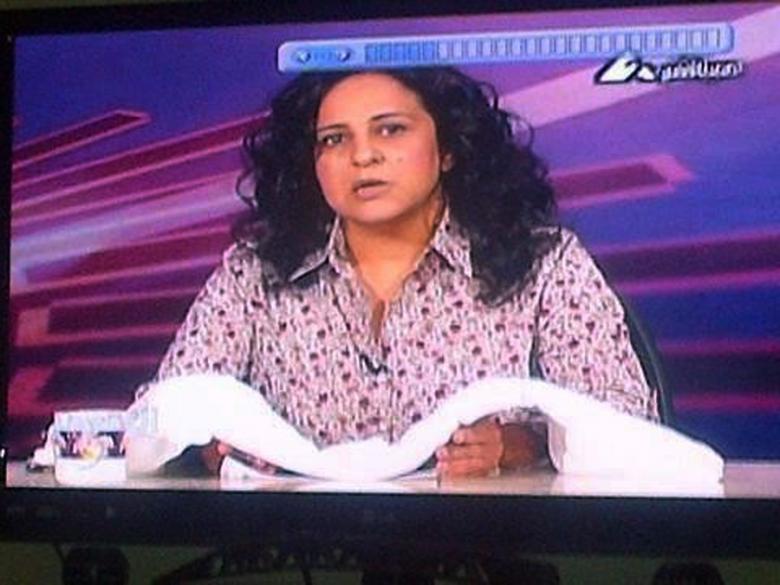 After holding a burial shroud

Fahmy told Egypt Independent that the incident is a part of what she described as the “Brotherhoodization of the media.”

Fahmy pointed to the television coverage of Saturday’s demonstration in front of Cairo University as evidence, saying that both satellite and terrestrial channels spent hours covering the protests in support of President Mohamed Morsy’s recent constitutional declaration, in contrast to the amount of airtime these channels have given anti-Morsy protests in Tahrir Square over the last week.

The Brotherhood “consider the state media their property, especially after Salah Abdel Maqsoud, a leading member of the group, became the head of the [Information] Ministry, and the channels’ coverage started to change in ways that surprised many of the presenters,” Fahmy said.

Fahmy speculated that the real reason behind the transmission being cut was her hosting of a retired State Security Investigation Services officer who spoke about his relationship with the Brotherhood during his time with the agency, which he left four years ago.

Her guest was going to list a few details on his good relationship with some members of the group before the revolution, which cost him his job, Fahmy told Egypt Independent.

The information minister may have feared that the Brotherhood’s image would be tarnished if its past relationships with security officers were highlighted, Fahmy added.

“The head of the Egyptian Radio and Television Union, Ismail al-Shishtawy, used to contact me directly to ask me to host Brotherhood and Freedom and Justice Party leaders in most of the episodes of my weekly program,” she said. “I would usually refuse because my program is trying, to a great extent, to discuss social problems — not to be an arena for politicians.”

Fahmy stressed to Egypt Independent that despite the fact that many Information Ministry officials are not Brotherhood members, they are trying to gain Maqsoud’s trust by representing the president and members of his group favorably.

Fahmy told Al-Masry Al-Youm that the director told her that the rest of her show would be recorded and aired later, to which she objected and left the studio in protest.

She said the episode was discussing the political situation in Egypt. At one point during the show, she brought out a white burial shroud and said, “Anybody should tell the truth whatever it costs, and carry his shroud in his own hands,” and the show was taken off the air minutes later.

Traditionally, when an Egyptian carries a burial shroud, this means that their life is at risk, or that they are preparing for their own funeral.

Fahmy described the incident as indicative of the intimidation that workers in the Maspero state TV building are facing. She argued that cutting a live broadcast requires a clearance from the information minister, adding that the move squanders public funds and denies people access to different opinions.

“A number of TV workers have been subjected to frequent threats to abstain from content that provokes officials,” she said.

Fahmy said she and her guests would submit a police complaint accusing the information minister of squandering public funds.