Facebook Twitter LinkedIn
Q: What is your name and profession?
A: My name is Osama Hussein al-Metwally al-Guindi. I am the head of the Central Security Department of the Presidency.
– The witness was sworn in before the court.
Q: What do you know of the Ettehadiya events?
A: People protested the Constitutional Declaration by staging a sit-in with tents outside the Ettihadiya Presidential Palace. We met with the president and he told us that he did not want a bloody dispersal of the sit-in. Then there was a clash between supporters and opponents.
Q: What is your job description?
A: Security procedures for personnel, documents and the president’s meetings.
Q: What is the reason for the protest?
A: To object the Constitutional Declaration.
Q: Who told you the Muslim Brotherhood supporters were coming to the palace?
A: The Military Intelligence, the State Security Apparatus and the Public Security Apparatus.
Q: How many were they?
A: I had already left.
Q: You said the supporters attacked the protesters and tortured them.
A: I watched it on television.
Q: Did you attend the meeting with Mohamed Morsy after the clashes? And what did he say?
A: It was about how to disperse the sit-in without shedding blood.
Q: Did he request to disperse it by force?
A: No he did not.
Q: Who attended the meeting?
A: Assad al-Sheikha, Ahmed Abdel Aty, the director of presidential security, and the commander of the Republican Guard.
Q: You said they all left after the meeting. Did Ahmed Abdel Aty leave too?
A: I don’t know, but Assad al-Sheikha was there.
Q: You mentioned during investigation that Mohamed Morsy knew of the detention of the protesters and did not move?
A: The events were broadcast live and Assad al-Sheikha was there. He must have told him.
– The defense asks the witness.
Q: Is there a link between the events of 30 June and 3 July? And why were you late in testifying?
A: We are only responsible for the presidential palaces. I came when I was summoned to testify.
– The court re-questions the witness.
Q: You said all the heads of departments left the palace during the events. When did you leave? And did Ahmed Abdel Aty leave too?
A: The president and all the heads of departments left. But I cannot determine if Ahmed Abdel Aty left too.
Q: You said there are cameras on the roofs of the Ettehadiya Palace that can monitor everything large or small. Were these cameras working during the events?
A: Yes, but they cannot monitor the blind spots.
Q: How did you know that those coming to the palace were Muslim Brotherhood supporters?
A: I don’t remember.
Q: You said that Assad al-Sheikha came to inspect the situation at the palace and asked you about the blood that was shed, and that you told him it was your responsibility.
A: I said so when he asked me whose responsibility it was.
Q: From your point of view, were there some who were paid and others who came freely to support?
A: The ones who were paid were already there. The supporters came later.
Q: Have you seen the detention incident at gate 4?
A: I’ve seen it on television.
Q: You said those who attended the meeting suggested to disperse the sit-in peacefully. Did they disagree with you?
A: No.
Q: When you said “your responsibility” did you mean the Republican Guard?
A: No.
Q: You said that you left at 3 pm. How did you know that Assad al-Sheikha was in the palace?
A: He left at 2 pm and came back half an hour later.
Q: Are there attendance sheets the prove the presence of the presidential staff?
A: No.
Q: When did Mohamed Morsy and the presidential staff leave?
A: Around three o'clock in the afternoon.
Q: How was your relationship with the former president?
A: Strictly business.
Q: Were the palace gates open or closed?
A: Closed.
Q: When exactly was the former president arrested?
A: I don’t know.
Q: You mentioned that Assad al-Sheikha came back after half an hour. Do you know where he was?
A: I assumed he went to meet with the president but I cannot tell.
Q: Do you have anything else to say?
A: No
– The witness signed the minutes of the meeting.
Edited translation from Al-Masry Al-Youm
Tags
Ettehadiya clashes Ittihadiya sit-in

Morsy trial over Ettehadiya clashes postponed to 22 May 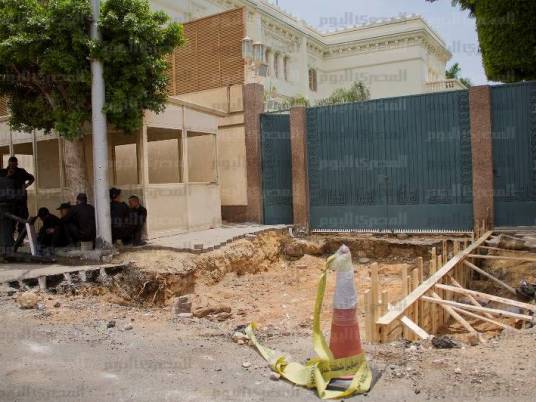