As part of celebrations for the 100th anniversary of the discovery of King Tutankhamun’s tomb, the Tourism and Antiquities Ministry, represented by the Supreme Council of Antiquities, on Friday launched the first virtual tour of the tomb recreated as it was first discovered in 1922, with all artifacts intact. 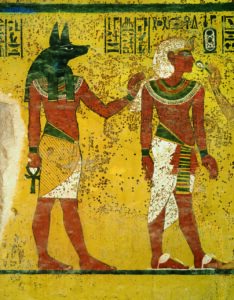 This virtual show is presented at the Visitors Center in the Valley of the Kings in Luxor, using advanced Meta Quest II glasses, and in cooperation with private Egyptian and foreign companies.

The Secretary-General of the Supreme Council of Antiquities, Mostafa Waziri, said that a set of these glasses are available at the Visitors Center in the Valley of the Kings in Luxor.

He noted that the experience has received great response and interaction from most Egyptian visitors and tourists. 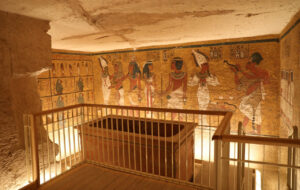 This unique experience falls under the Tourism and Antiquities Ministry’s keenness to use modern and advanced technology in displaying and improving the experience of visiting archaeological sites and museums in Egypt, he explained.

British archaeologist Howard Carter discovered King Tut’s tomb in 1922, when he dug through one of the doors and entered the tomb of the pharaoh, which has remained intact for about 3,200 years.

The tomb contained more than 5,000 artifacts, including a solid coffin, a gilded mask, and thrones.

It took Carter ten years to record all the items. But the only thing he couldn’t find was any record of how Tutankhamun died as there were no surviving records of the circumstances of King Tut’s death.

Scholars have now concluded that King Tutankhamun was not murdered, after a lengthy investigation that seemed to refute popular theory.

Armed Forces organize visit by parliamentary delegation to air base