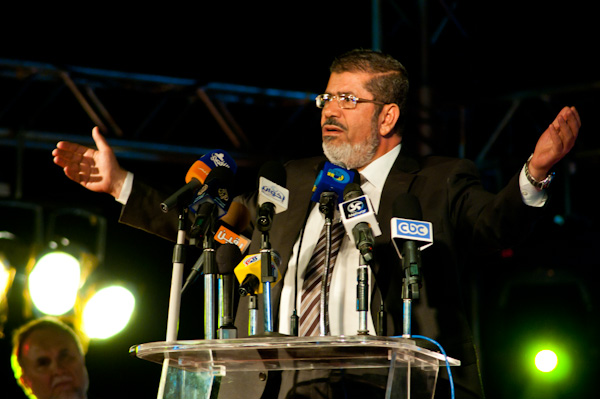 Mohamed Morsy, the Muslim Brotherhood’s presidential candidate, has filed a lawsuit against TV presenter and staunch supporter of the ruling military council Tawfiq Okasha, accusing him of public defamation and slander.

State-owned MENA news service quoted the head of the Freedom and Justice Party’s legal committee Mokhtar al-Ashry as saying that the lawsuit was filed against Okasha in light of his “intentional falsehoods and accusations that amount to defamation and slander” against Morsy.

Okasha owns the Faraeen satellite channel. In the past he has been very critical of revolutionaries and their supporters, but recently he shifted his focus to criticizing the Muslim Brotherhood and their presidential candidate.

In the first round of the election, Morsy came in first with nearly 25 percent of the vote while former Prime Minister Ahmed Shafiq finished second with around 24 percent. Turnout was 46 percent according to the elections commission.

On 27 May, Okasha spent over three hours criticizing the Muslim Brotherhood and Morsy, and openly declared his support for Ahmed Shafiq on his program on Faraeen, “Egypt Today.”

In his lawsuit, Morsy also demanded that the prime minister, information minister and president of the General Authority for Investment and Free Zones prevent Okasha from appearing on any television channel for overstepping the bounds of freedom of opinion and expression and for committing crimes punishable by law, as well as for defaming individuals, organizations and institutions in violation of the law and exploiting the media to influence the electoral process.

In March, an Egyptian court sentenced Okasha in absentia to six months imprisonment in a libel and defamation lawsuit filed against him for insulting the mother of torture victim Khaled Saeed.

Okasha had on his show insulted Saeed’s mother, saying that she did not raise her son properly and describing him as an “addict.”

In January, Okasha’s show was banned for continuing to air after an administrative court issued a verdict that he breached the code of ethics regulating the media.