The complex of the Mevlevi Dervishes: Listening to the harmony of the cosmos

A jewel of Islamic architecture, the complex of the Mevlevi Dervishes offers a wonderful example of a sama’khana (hall of listening). Located at the foot of the Citadel in the heart of Islamic Cairo, the complex has undergone a long process of restoration that started in 1979 under Giuseppe Fanfoni, director of the Italian-Egyptian Center for Restoration and Archeology.

Fanfoni worked as a restoration expert at the University of Rome “La Sapienza”, as a professor of design at the Professional School of Arts in Rome and as a professor of methodology and restoration techniques at Cairo University. He has long promoted the “Cantiere Scuola per il restauro e l’archeologia” in Helmiah, a technical school for restoration and archeology that emphasizes the importance of laboratory methods.

The complex of the Mevlevi Dervishes includes, beside the Sama’khana, the Takeyya (the "convent" of Dervisci Mevlevi), the Mausoleum of Hasan Sadaqa and the Madrasa of Sunqur Sa’di.

As Fanfoni explains, when he arrived to Cairo in 1979, the Sama’khana was completely abandoned. “The dome of the theatre had almost collapsed, and the rest of the complex was used as a hospice.”

At the time, Fanfoni had been invited to Cairo to teach a course on restoration at Cairo University. Carla Burri, former director of the Italian Institute of Culture, had seen and greatly admired the Sama’khana. She requested Fanfoni to help restore the area.

“Back then, the interest in restoring Islamic Cairo was strong,” the Italian architect explains. Hence, the restoration of the architectural complex began–a process that continues until this day. “The restoration of the Mevlevi Dervishes complex has created a generation of restoration experts, bricklayers, carpenters as well as administrators in various Egyptian universities, who participated in the restoration work based on practical methods that aim at teaching while working,” adds Fanfoni.

The circular shape of the khana (hall) is the result of a series of interventions involving construction, integration and restoration carried out by the dervishes, who utilized the existing structures of the Suqur Sa’di Madrasa.

"The Sama'khana reminds the concept of ‘design'," says Fanfoni.  “The design is an exemplification of its function, with a noteworthy difference. While the function of architecture is currently restricted only to the representation of the social moment, the Sama’khana represents itself, that is to say the spiritual moment,” Fanfoni explains.

In order to listen to the harmony of the cosmos, the dervishes moved in a circular space, expressing the geometrical and mathematical symbolism involved in the ceremony.

The point is the origin of everything. Geometrically it doesn’t have any dimensions and it represents absolute unity. However, it becomes an image when it assumes the circumference of a circle. The geometrical sequence of points symbolizes the path of life and knowledge, which continuously refer to the point.

“These are Greek principles that were reorganized by Sufi thinkers on the basis of the philosophy of Jalal Eddin al-Rumi and express a new function through the Sama’khana,” says Fanfoni.

The circle and its center represent the universe and its unity. According to the rite, the dervishes stood to the right and left of a horizontal axis depending on their religious apprenticeship. They then moved counterclockwise–like the procession around the Kaaba in Mecca–along the perimeter of the hall, making a gesture of reverence when passing in front of the Sheikh. During this ritual, some dervishes begin to turn in two orbits with the palm of one hand turned upwards and the other turned downwards, indicating the axis that links absolute unity with the reality of existence.

The hall of spiritual listening was originally colored white and ivory yellow; it was extremely bright thanks to eight windows openings in the dome. When the building became unstable due to a foundation problem, the dervishes tried to fix it by closing the openings, the doors in the underneath part of the Sama’khana, the elliptical windows as well as those of the dome, adding frescoes on the wall to recreate the original bright atmosphere. Fanfoni took the original paintings of landscape as a reference in the course of the restoration. He took off the oil paintings and reopened the windows. During the restoration works, Fanfoni noticed that the wall inside the Sama’khana extended deeply into the ground. Therefore, he suspended the restoration works to start archaeological excavations that uncovered the Madrasa of Sunqur Sa’di (the Islamic School of Sunqur Sa’di).

Proceeding from the stairs inside the Sama’khana, visitors enter the delightful Madrasa, which dates back to around 1315 AD.

Fanfoni explains that the archaeological excavation revealed the central courtyard of the Madrasa, which was originally open-air with brick floors. It was surrounded by four rooms presumably arranged on three floors, of which only one was preserved.

When the dervishes arrived around 1590 AD, they obtained permission to build on the ruins of the Madrasa and the Mausoleum.

On the same level of the Madrasa, and separated from it by a full-length window, there is the mausoleum of Hasan Sadaqa. Square-shaped and surmounted by a wonderful dome, the mausoleum preserved four wooden sarcophagi covered by cloth according to the traditions of the dervishes.  The biggest sarcophagus with inscriptions belongs to Hasan Sadaqa, while the one in the center originally contained the mortal remains of Sunqur Sa’di, the reason why the mausoleum is also named after him.

The restoration process of the mausoleum started thanks to the Italian Law 212/92, as Fanfoni explains. “It [the law] aimed at supporting the development of countries in the Middle East by participating in restoration works with Italian as well as local companies. However, to have the money in advance I mortgaged my house in Italy.”

The majority of the stuccoed decorations had fallen off. The restorers reconstructed them by adding the missing parts at a lower level in order to clearly distinguish them from the original ones. Restoration, according to Fanfoni’s philosophy,  “can’t change the original structure of a building. Otherwise, we can’t understand the meaning of the place nor the feelings of the people who built it.”

The convent of the Dervishi Mevlevi hasn’t completely been restored yet. Some of the rooms are used as laboratories for the students of the worksite school for restoration and archeology. Others are used as offices. And the area next to the Sama’khana hosts conferences and exhibitions. A photography exhibition is currently running, showing all the restoration phases. Twice a year, dervishes come from Turkey to perform.

The complex of the Mevlevi Dervishes is located in Shari’ al-Suyufiyya, at al-Hilmiyya al-Gidida area. Looking at the Citadel, with the Sultan Hassan Mosque to your back, take the one-way route on your left up to the iron gate that surrounds the mosque. Once there, take a narrow street on your right, then turn left.

Click here for a map, essential to finding the place. 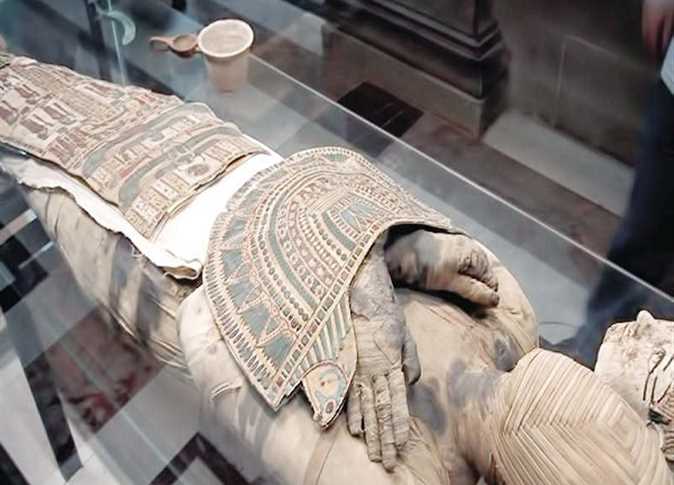 Video| 400 channels to broadcast the royal procession of mummies