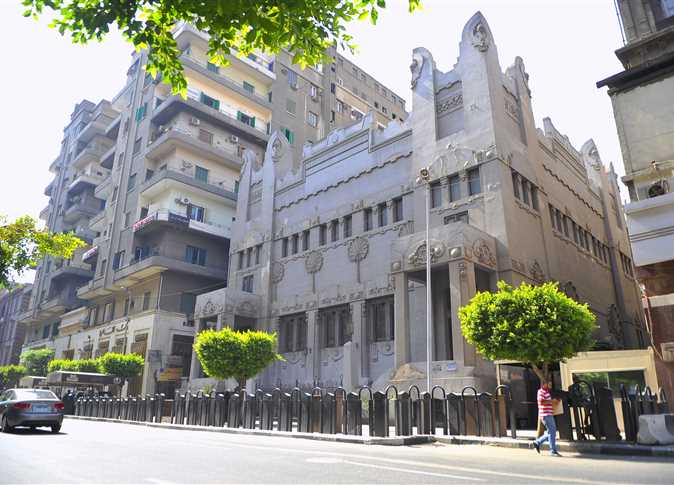 For the first time in decades, Egyptian non-Jews have been invited to the Sha’ar Hashamayim Synagogue to celebrate Hanukkah Day, or Eid al-Anwar, one of the faith’s most important holidays.

The celebration was also attended by members of the Drop of Milk Association for the preservation of Jewish heritage, a 24-person US-Jewish tourist delegation, and head of the Jewish community Magda Shehata Haroun, who opened the event with a welcoming speech:

“Our number as Egyptian Jews is no longer great, but we have Muslim and Christian friends who are interested in preserving the Jewish heritage. They are among us today, and there are many others who joined the Association of Drop of Milk…We have a great heritage, and personally, I’m not worried about it, because the young people of Egypt will preserve it,” she remarked.

Upon concluding her speech, Haroun began reciting prayers and lighting candles, along with the US Jewish delegation.

Stephen Doerfler, a member of the American-Jewish delegation, performed the prayer rites with the members of the delegation and concluded with a brief speech: “Today we, the Jewish community in Egypt, celebrate together with a group of American Jews, so we welcome all Jews, Christians and Muslims here in the house of the Lord”.

Hanukkah is not one of the Jewish holidays mentioned in the Bible, Doerfler continued, but it is one of the most popular Jewish holidays, known for fun and happiness. It was first celebrated 2,000 years ago, and is an opportunity for celebrations and festivals.

He outlined the holiday’s roots, as the anniversary of rebel Judah Maccabee’s victory against Greek rule in Palestine, culminating in the establishment of the Second Temple.

The Egyptian-Jewish community announced their official celebration on Facebook, and invited the first 50 people to comment the opportunity to attend. This marked the first time the broader public was invited to attend a ceremony at the Sha’ar Hashamayim Synagogue, located on Adly street.

One of those who responded to the public invitation on Facebook was Mostafa al-Tobgy, who spoke at the ceremony. “Due to my interest in public and cultural activities, I follow the page of the Drop of Milk Association for its concern with preserving the Jewish heritage…I found [this to be] an opportunity to visit the Jewish temple, to get to know the place closely, and to share in Jewish celebrations.”

Tobgy added, “It was interesting to see how the Jewish prayer was performed. The head of the community explained it to us…and explained the nature of the celebration.

In the end, the temple is part of the Egyptian heritage, which we must recognize and preserve.”

“The ceremony was [originally] limited to the members of the community in the courtyard of the temple, but this year, we were contacted by an American tourist delegation who suggested celebrating at the temple, and we welcomed them, and invited the members of the Association of the Drop Milk, Muslims and Christians,” she added. “We also directed a public invitation through Facebook, to deliver a message that we all accept each other.”

On the efforts of the Jewish community and the Drop of Milk Association to restore Egyptian synagogues, Haroun commented that they “renovated the temples of Heliopolis and Maadi to be used for cultural activities, including theater and musical performances”.

“I tried to communicate with the Minister of Culture more than once to find out the latest developments on a number of issues, including the indexing of the archives of the Egyptian Jewish community that I handed over to the ministry,” she added. “I still ask for a meeting.”

“The archive is very important, and recently, I received a letter from the French embassy stating that there were four paintings displayed in the Louvre Museum, owned by an Egyptian Jew who was killed in the Second World War, and Paris needs to return it to his heirs”.

“If he does not have heirs, the community will receive [the paintings] from the Louvre Museum to be displayed in Egypt,” Haroun said. “I sent to the Minister of Culture messages in this regard, but to no avail.”