Facebook Twitter LinkedIn
The Agriculture Ministry is investigating claims from a US media outlet that several cases of hepatitis-A infection in the state of Virginia are linked to strawberries imported from Egypt, ministry spokesman Edi Hawash said on Tuesday.

In his statement, Hawash said that the US has not officially informed Egypt of the claims, but the claims are being investigated anyway.

Agriculture Minister Essam Fayed has formed a committee, headed by the chairman of the Union of Egyptian Exporters, to investigate the issue, Hawash added.
He said that recent tests conducted on random samples of exported strawberries have shown no cases of the virus.

Alaa Abdel Karim, the General Organization for Export and Import Control, affiliated to the Agriculture Ministry, said his organization is not normally resonsible for strawberry exports, but it will work with the ministry anyway through the specially formed committee.

He said the Health Ministry examines batches of strawberries and issues certificates stating that they are free from disease and valid for export.

Meanwhile, Hussein al-Hinnawi, the president of the Union of Producers and Exporters of Horticultural Crops, said he doubts that the reported hepatitis-A infections were caused by frozen Egyptian strawberries.
He said Egyptian strawberries are scrutinized at competent laboratories prior to export. Moreover, exporters have full awareness of good practice through the stages of production, transfer and export, Hinnawi said.
The WRIC news website, affiliated to the the ABC news network, reported on Sunday that 10 people in Virginia had become infected with hepatitis-A after consuming smoothies made of strawberries imported from Egypt.
"The smoothie chain Tropical Smoothie is now pulling all Egypt-sourced strawberries from freezer shelves," the WRIC reported.
Egypt ranks first among Arab countries in the production and export of strawberries, exporting about 40,000,000 tons of fresh and frozen strawberries to 30 countries in Europe, America, Southeast Asia and the Gulf states, according to Al-Ahram.
Edited translation from Al-Masry Al-Youm
Tags
Agriculture Ministry export hepatitis A strawberries

Egypt suffering from US$40 billion gap between exports and imports: Engineering Export Council 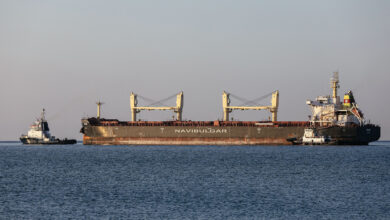 Ukrainian agricultural products arrive in Egypt on board ‘Queen Sara’