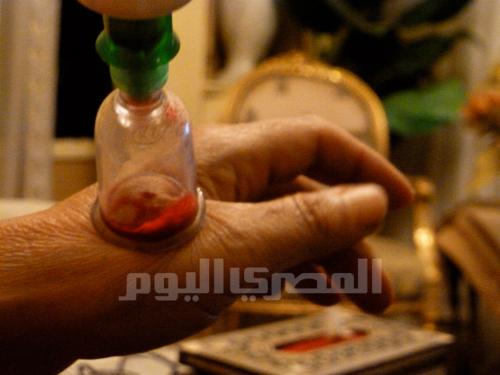 A small suction cup is placed on the skin and a vacuum is created, drawing the blood close to the surface. The cup is removed and with a small razor blade, tiny incisions are made. The cup is replaced, the suction is applied and the blood begins to ooze out — dark, clotted and “filled with toxins,” according to Dr. Magda Amir, an expert in the practice and study of hijama, or cupping therapy.

As we meet, I notice the characteristic red-tinted circles on her upper neck.

Hijama, a form of alternative medicine, is part of a larger debate on the scientific legitimacy of healing outside of Western medicine. The practice is said to predate Islam and has roots in ancient Chinese medicinal culture. Modern communities supporting the practice are substantial and diverse, even spanning some countries in Europe.

Although many communities advocate for the treatment because of its alleged positive health effects, among Muslim populations and Arab countries, hijama is also popular because of its religious undertones and spiritual associations. The Prophet Mohamed was documented to have highly praised both preventative and curative hijama in the Hadith, the deeds and sayings of the Prophet.

After receiving her PhD in biochemistry, Amir sought a degree in homeopathy from the London International College in Egypt. From there, she began to immerse herself in the study of healing by hijama.

“I began studying acupuncture, but then I read about the Prophet’s recommendation about hijama. When I compare it with other techniques such as aromatherapy and herbal treatment, hijama is so fast. When you think about it, instead of dealing with the disease or [treating] the cause of the disease, you are just getting rid of the cause itself,” Amir says, referring to the removal of toxin-filled blood.

Preventative hijama, as prescribed by the Prophet, is done on the 17th, 19th and 21st of every lunar calendar month.

“Our body is affected by the moon, just as the tides are,” she elaborates. “Because of the lunar magnetic field, when the moon is full [on the 15th day], all the toxins in our cells are accumulated beneath the surface of the skin.”

Applying hijama in three even intervals after the full moon “detoxifies the body monthly,” she says. Experts on hijama and acupuncture agree it is an “energy” medicine: It clears the body’s meridians of blockages to allow one’s “vital energy” to flow.

According to doctors and medical experts in Egypt, hijama is not considered a superior treatment for disease.

“Doctors never believe me,” Amir says about the medical response to her personal success stories.

For pathologists and surgeons alike, hijama is not an independent treatment that often crosses their mind, except when patients approach them with the idea or come with complications.

Dr. Mohsen Khalil, a general surgeon in a small private clinic, describes a situation in which an elderly man had hijama performed on a diabetic foot, a condition caused by untreated diabetes, in which the foot has a severe infection and possible ulcers. The procedure’s small incisions became gangrenous and the area had to be amputated.

However, Dr. Ali Ramadan, the physiotherapist for the Egyptian Olympic team, believes that alternative medicine — hijama included — is not meant to be a replacement.

“Alternative medicine is not meant to be used instead of normal Western medicine, that is impossible. It must be used alongside it,” he explains.

His practice near Ramses Square, open for more than 30 years, provides hijama and acupuncture treatments for patients who have exhausted every avenue of Western medicine and still cannot find relief from their conditions.

The legality of hijama is contested around the world because of the difficulties involved in regulation. In Saudi Arabia, an Islamic state in which hijama is increasingly popular because of its religious connections, the process was made illegal in 2006 because of poor hygienic practice and a lack of scientific empirical evidence supporting its application.

Amir says she once owned an alternative medicine clinic that also practiced hijama with huge success, but that the Egyptian government closed down her clinic, along with others, 10 years ago. But Ramadan does not hide his practice. He explains that doctors and medical colleges are currently conducting research on hijama to present their findings to the Health Ministry. After about 20 more research studies, Ramadan says, the ministry may permit the practice. For now, the ministry only grants approval for doctors conducting this research, as long as the patient is fully informed.

Amir no longer practices, but she does use hijama on herself and advises others on the best techniques.

“This spot is very effective for treating insomnia and depression,” she explains while demonstrating the process on the skin in between her left thumb and forefinger. The short and quick incisions look as if the sanitized razor blade is not even breaking the skin, but as she puts the suction cup back on the area, I see the blood slowly pour out.

“You won’t believe me, I know, but hijama even helps relieve us from magic,” Amir exclaims, preempting my reaction. “Because we know that magic is shaitan [the devil] and he runs in our blood, sometimes patients will come in and they don’t know what they have. Doctors fail to heal them. When we apply the hijama, some of them go into a brief coma, and it is as if they are going through another state.

“Later on, they improve. And since shaitan runs in our blood, when we get rid of clotted, ugly blood, they feel very light,” she says.

Despite the stigma and the fuzzy politics of hijama, studies have shown that it may be effective in reducing levels of LDL, bad cholesterol that leads to cardiovascular disease and other health problems. A 2008 study published in the American Journal of Chinese Medicine suggests that hijama is highly effective in treating the severity and frequency of tension and migraine headaches, conditions that Western medicine has difficulty treating.

“What we need is more education,” Ramadan stresses. He hopes that presenting a body of positive research to the Health Ministry will be enough to bring hijama out of its stigma. Amir agrees that hijama and acupuncture should be widely available, and believes that people don’t understand that having all medical options, even if not mainstream, is important.