The former Minister of Antiquities, Zahi Hawass argued against claims that there was another sphinx which was destroyed in the past.

Hawass spoke in an interview for the DMC Channel, recorded with the impressive Pyramids of Giza in the background. He said: “There is a rumor that has roamed foreign newspapers, as well as some Egyptian newspapers, that were spread by someone who claims to be a historian, and took the idea from an Italian historian, that there is another Sphinx, on the other side.”

Hawass continued to explain the theory, “It is based on this wall we see, that talks about Thutmose II [ancient Egyptian pharaoh] making sacrifices to Abou Al-Hool [the sphinx].”

He went on, “From each sacrifice there is two, which is how the conclusion came that there are two. So where did the other one go? The disappearance was explained through a storm that destroyed the other sphinx completely.”

Hawass then sought to debunk the theory, asking “if there was really a storm that destroyed the other sphinx, why didn’t it destroy this one?”

He refuted speculation naming a specific area as the place where the other sphinx stood, saying “this area has been dug by so many archaeologists, and it yielded nothing.”

The theory that there was more than one sphinx is popular among historians. Bassam al-Shammaa is an Egyptologist and scholar who has been trying to track the lost Sphinx for over a decade.

Hawass, meanwhile, continued to speak of how the sphinx was built, and referred to a part of the sphinx with writing on it indicating King Thutmose IV was the first to make adjustments to it.

His tour with the DMC news anchor continued to the inside of the Pyramids of Giza. Hawass then spoke about a newly-discovered papyrus in Sinai that he labeled “the most important discovery of the twenty-first century.”

They then reached a room which Hawass described as “the only major room in the pyramids which contains a big tomb.”

Hawass also discussed the current state of the pyramids and remarked on how to improve it, “In order for the situation in the pyramids to improve there has to be a system.”

They discussed the chaos in the ticketing system for entering the pyramids. Hawass commented, “Egyptians must be banned from visiting the pyramids during Eid.”

As for tourism in Egypt, he was hopeful, “there isn’t a single [ancient] civilization known to kids around the world except Egypt’s, we must use this to revive tourism in the country.”

He also spoke about how climbing the Pyramids should be banned, saying it is an act of “visual pollution.”

“When I was minister, I banned climbing the Pyramids. We must respect our monuments and keep them in good condition.”

Not only that, but Hawas expressed annoyance and visible frustration with the hustle and bustle around the pyramids area, “there are buildings, Pizza Hut and Abou Shakra [a local Egyptian restaurant] around the Pyramids area… a very difficult situation! Impossible! The Pyramids should be at least a kilometer away.”

Finally, one of the highlights of the interview was Hawass taking viewers on a tour inside the sphinxes, something which is seldom accessed by visitors to the pyramids. 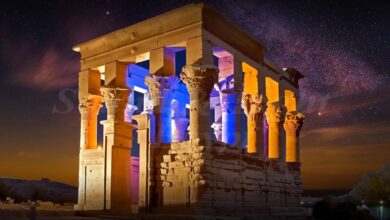