Bookstores seem to be dying faster than it takes to download the complete works of Shakespeare these days, so when one comes back from the grave it's a cause for celebration.

As it is the case this summer in New York, where venerable retailer Rizzoli Bookstore — booted out of its grandiose West 57th Street premises in April 2014 — has reopened once again.

Some feared Rizzoli's flagship would be gone for good, mounting protests to decry the loss of its elaborate ceilings bedecked with chandeliers, iron-railed balconies and, of course, its well-stocked shelves. 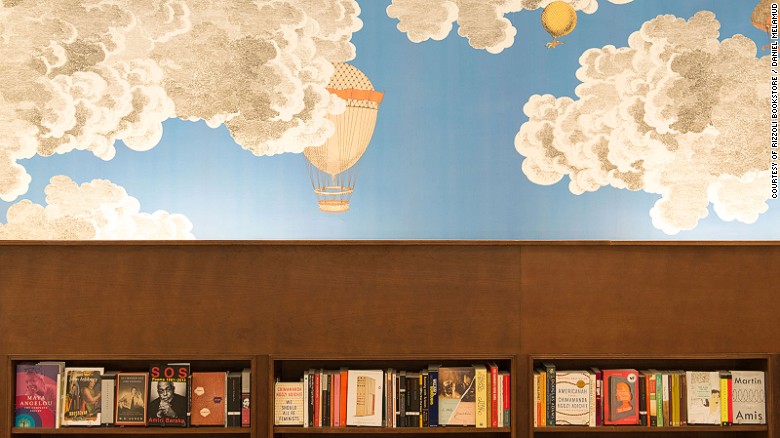 Rizzoli joins other brick-and-mortar book-selling survivors — and brave newcomers — that have adapted to the Age of Amazon in their own ways, from opening 24 hours to undergoing spectacular design renovations or stocking books that aren't sold by the online giant.

Old or new, all with fascinating stories, the bookstores below serve as historic sites, sanctuaries, salons of culture and must-visit entries in any travel itinerary.

Opened in 1951, this Paris Left Bank fixture looks like something straight out of a Hemingway book — for good reason.

It's the spiritual successor and namesake of the first Shakespeare and Company, run by expat American bookseller Sylvia Beach and immortalized in Hemingway's memoir, "A Moveable Feast."

Beach closed her store in 1941, but in 1958 gave her blessing for another — called Le Mistral — to take the Shakespeare and Company name. 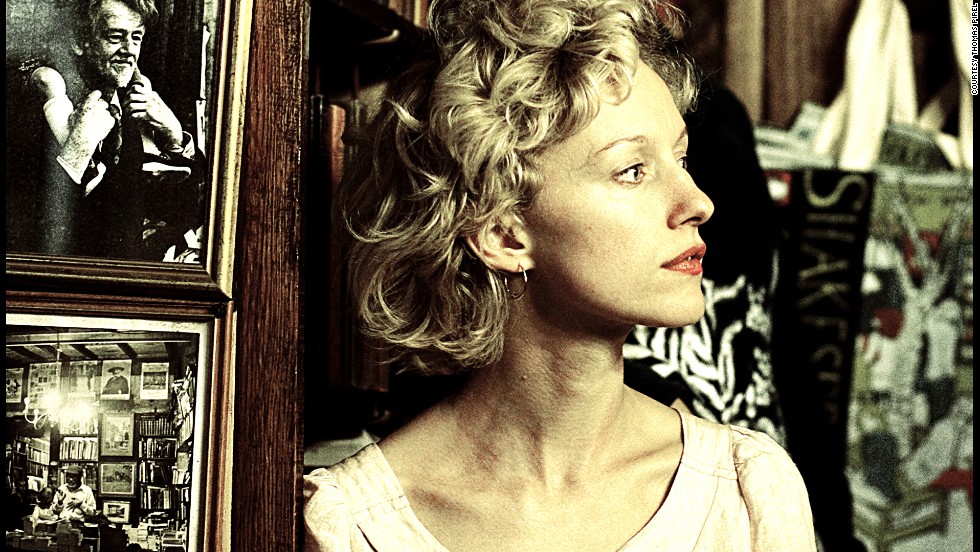 From its opening day, the second Shakespeare and Company has incorporated writers' residencies.

Up to four scribes can spend the night in the store, with most staying a week to a month.

In 1999, the first Eslite bookstore delighted the city of Taipei by staying open 24 hours a day.

But the 17,000-square-meter store really made its name by stocking an impressive multi-language array of books and magazines.

It's been so successful, two more Eslite branches have opened in the capital.

One is the country's largest bookstore, while the other is a small city of retail areas, a commercial arcade, a theater and a music performance space. 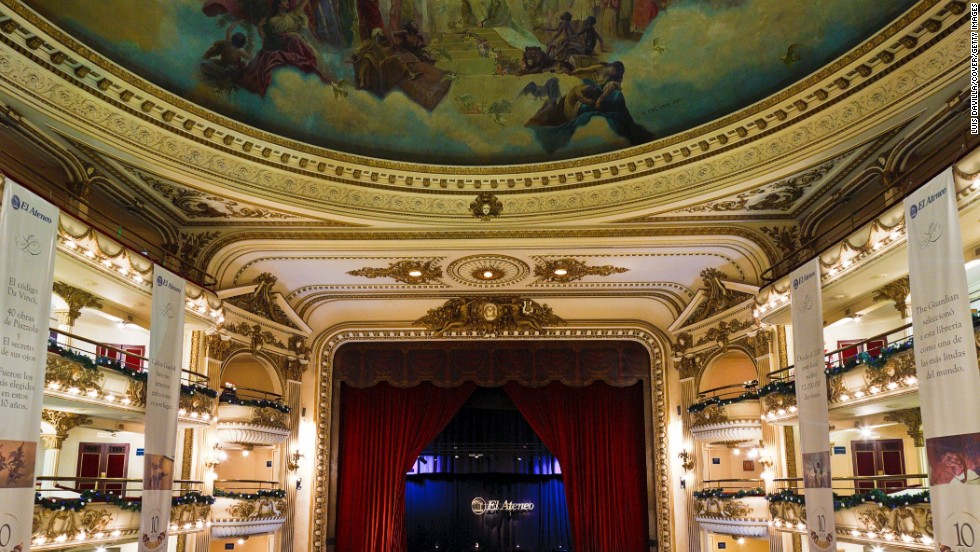 Originally a theater, El Ateneo was converted into a cinema and then a bookstore.

Converted into a cinema in 1929, the building that houses El Ateneo underwent its most recent rebirth into a bookstore in the early 2000s.

The stage and theater boxes have been converted into reading spaces.

China's most beautiful bookstore is located inside a massive underground parking lot once used as a bomb shelter.

The 4,000-square-meter store's unusual features include large crosses, a copy of Rodin's "The Thinker" and a checkout counter built out of thousands of old books.

The store also functions as a sort of public library, with more than 300 reading chairs.

"A good bookshop should provide space, vision and nurture the city with its humanitarian spirit," owner Qian Xiaohua tells CNN. "It's a place for people to have dreams in the city." 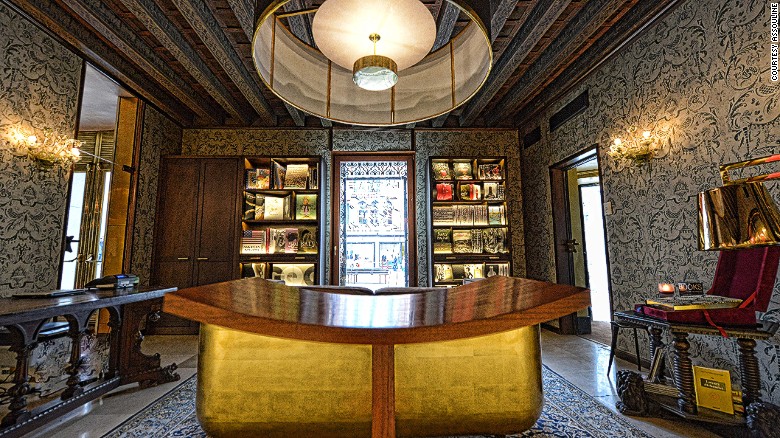 Located on the ground floor of the Bauer Hotel, a restored 18th-century palazzo, this boutique opened by luxury publisher Assouline in 2014 is a study in beautiful interior design.

The store stocks many of the label's most expensive books, such as handcrafted volumes from its Ultimate Collection — priced from $500 to $7,000 — which range in subject matter from fashion and architecture to travel and lifestyle.

Previous incarnations of this sublime bookstore and its publishing house date to 1869, but this beauty was built in 1906 by engineer Xavier Esteves.

A century later, it remains arguably the world's most beautiful bookstore, with neo-Gothic architecture incorporating stained glass, a sweeping staircase and a plaster ceiling imitating wood.

It's become so popular with tourists, in July 2015 the store started charging entrance fees.

A stunning panorama of the store can be seen at 360 Portugal. 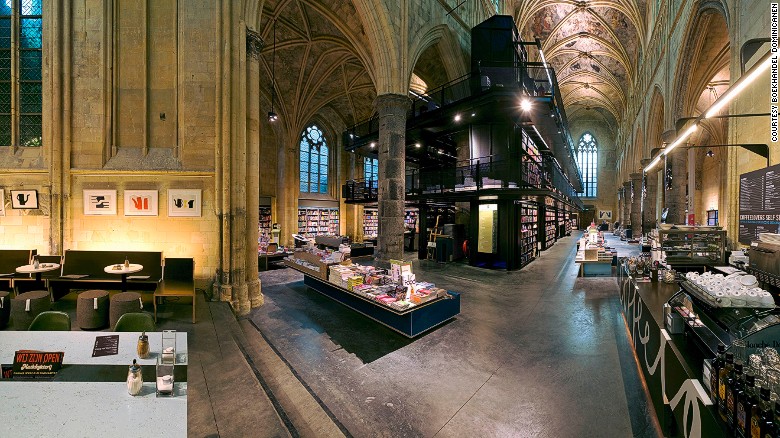 The church housing the Boekhandel Domincanen was built in 1294.

Built in the 13th century, this 1,100-square-meter former Dominican church was converted into a bookstore in 2006.

Before an award-winning redesign, the Gothic space had been used for numerous purposes: housing the Maastricht City Orchestra, hosting children's carnivals and slaughtering sheep.

In addition to stocking 40,000 books in Dutch, English, French, Spanish and Italian, and pouring the best coffee in town, the store hosts approximately 140 events per year.

Visitors should set aside a good two to three days to get lost in this iconic Portland landmark.

The largest used and new bookstore in the world is housed inside a modest, multi-level building that takes up a full city block and is often crowded.

New and used editions are shelved side by side, giving customers a handy choice of price options.

The biggest names in publishing show up here to do readings and book signings — the venue is highly sought out by authors on book tour.

The staff's passion for reading shines through on the store's treasure of a website, which features an entertaining book blog in addition to a comprehensive and ambitious online store.

Housed in a 150-year-old former sly grog shop (speakeasy) on one of Melbourne's most interesting streets, this small bookstore is the only retail shop in Australia specializing in cookbooks.

Every type of cuisine and culinary category imaginable can be found on its floor-to-ceiling shelves.

"Our customers are chefs, foodies and armchair gourmets," co-owner Tim White tells CNN. "We catalog more than 40,000 cookbooks and on any given day have at least 30,000 in stock."

The store ships around the world, at cost.

Back in the 1920s, six blocks of Manhattan's Fourth Avenue were known as "Book Row."

Of the 48 bookstores that gave the district its name, Strand is the only survivor.

After moving to its current location on Broadway and 12th Street, the beloved NYC store built up a staggering catalog that now includes 2.5 million new, used and rare books.

The coolest section is the Rare Book Room.

"Our most expensive title in store right now is a copy of James Joyce's 'Ulysses' illustrated by Henri Matisse," marketing manager Brianne Sperber told CNN in 2014.

"People still read hardbacks and books are still collectors' items so we expect Strand will continue to fare well against Amazon," says Sperber. 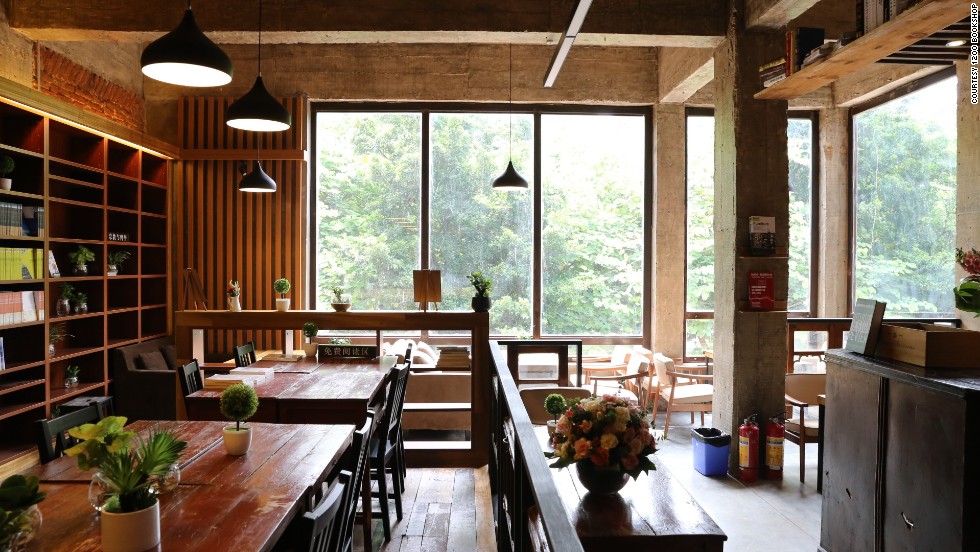 This quirky 24-hour shop has made a name for itself not only for selling books and coffee, but for providing a haven for travelers.

Inspired by Shakespeare and Company in Paris (above), the founder of 1200 Bookshop offers free stays to backpackers in a private room on the store's premises.

"We are doing business at the store during daytime but making friends at night," says founder Liu Erxi.

To apply for a stay, travelers must email the store ([email protected]) in advance, stating their background and reasons for requesting a stay — foreign tourists are welcome.

Chosen guests may be asked to share their experiences with customers during one of the regular midnight in-store seminars.

In June 2014, the century-old London bookseller moved into its spacious new digs — the size of 13 tennis courts — just a step away from its former home.

Foyles' new space has its own interesting history as the former Central Saint Martins College of Art and Design building, where Alexander McQueen and Stella McCartney once studied.

The stage where the Sex Pistols played their first gig in 1975 now houses the Foyles' children's department.

The store also launched a helpful in-store digital book search map that's automatically enabled on customers' smartphones when they connect to the store's Wi-Fi network — the first of its kind in the country. 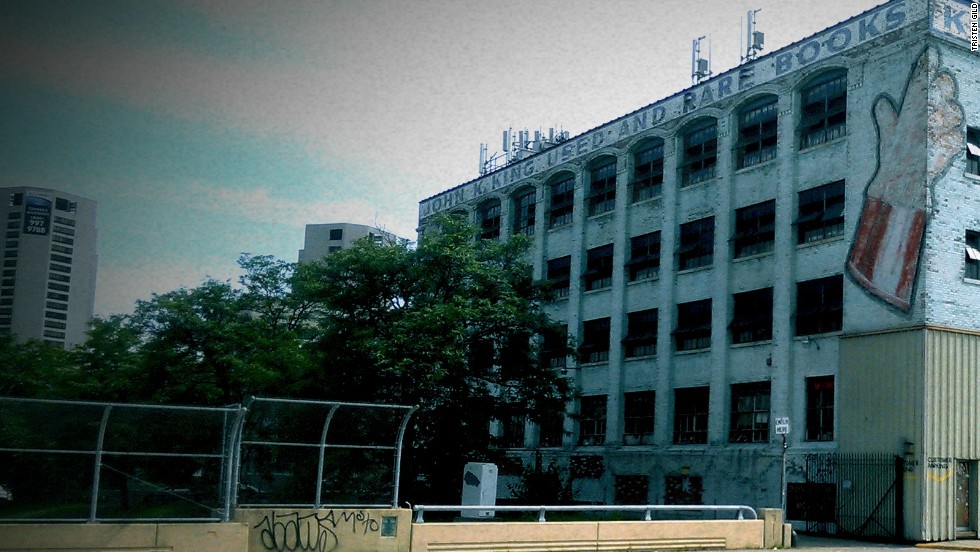 The four-story John F. King store in Detroit is organized into more than 900 categories.

Opened in 1965, this massive bookstore is one of Detroit's must-visit venues.

Housed in an old glove factory and with more than a million books in stock, the store has more than 900 (yep, 900!) alphabetized categories.

Some of the most notable books in the King collection?

"Our oldest book is a copy of the writings of St. Thomas Aquinas, printed in Venice in 1482."

A quote from its website sums up the store's enormous scale: "We buy books and libraries!"

This large and airy store in the heart of London's Covent Garden should come with warnings of itchy feet.

To gaze across the shelves in Stanfords — one of the world's finest travel book shops — is to consider a world of adventurous opportunities.

This is the place to go for anyone embarking on foolish treks into the Great Unknown.

No matter how unknown the Unknown is, Stanfords probably has not only a guidebook, but a fold-out street map detailing where to find the Unknown's best cocktails.

It's not just guidebooks and maps.

There's a comprehensive selection of travel writing, including many obscure texts.

For those looking for that little known account of mountain prawn hunting in Bhutan, or crossing the Kalahari on a spoon, Stanfords is a safe bet.

When "Bel Canto" author Ann Patchett opened a bookstore in Nashville on a whim, with a partner she'd just met, she didn't expect to be become the unofficial spokesperson for independent bookstores struggling in Amazon's wake.

Patchett's efforts to publicize the store thrust it immediately into the literary spotlight when it opened, securing a New York Times front page story and a spot on "The Colbert Report."

Thanks to Patchett's connections, Parnassus — an ancient Greek term for the world of poetry — has no shortage of famous writers (David Sedaris, Jonathan Franzen and former president Jimmy Carter among them) turning up to read from their latest books.

As befitting its location in the birthplace of country music, the store carries a thoughtfully curated music section.

"I get to recommend the books I like to read," Patchett tells CNN. "All my life I've loved telling people what books I think they'll love, now I have a lot more people to tell." 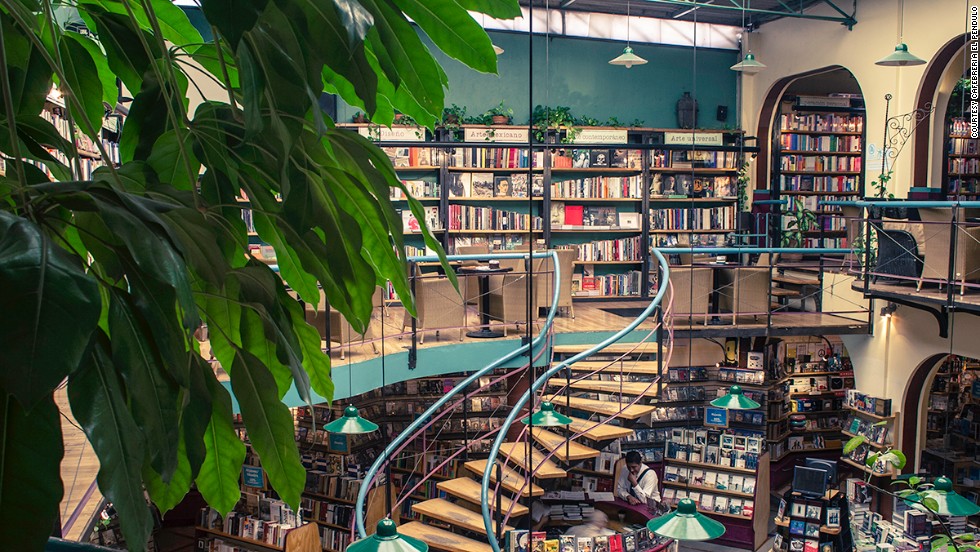 El Pendulo is a lovely place to spend a weekend morning in Mexico City.

Breakfast on the weekend at this adored bookstore and cafe is accompanied by live classical music.

The loveliest of the six branches in Mexico City, the 22-year-old Polanco store also serves the best food.

The service may be slow but with this ambiance and a book in hand, you'll hardly notice.

Hopefully, the Last Bookstore will never fulfill the prophecy of its name.

The popular warehouse-like store buys and sells new and used books and is home to a graphic novel shop and a record shop.

The store's columnar displays of books are so cool, last year they served as a backdrop for a fashion shoot in "Esquire."

The 100,000 books stacked in the "Labyrinth Above the Last Bookstore" section on the mezzanine level sell for a dollar each.

"The space we occupy was originally a bank, and there are still vaults on both floors of our store, but now they are full of books," said store manager Katie Orphan in 2014. "We generally have around 200,000 books in the store at any given time."