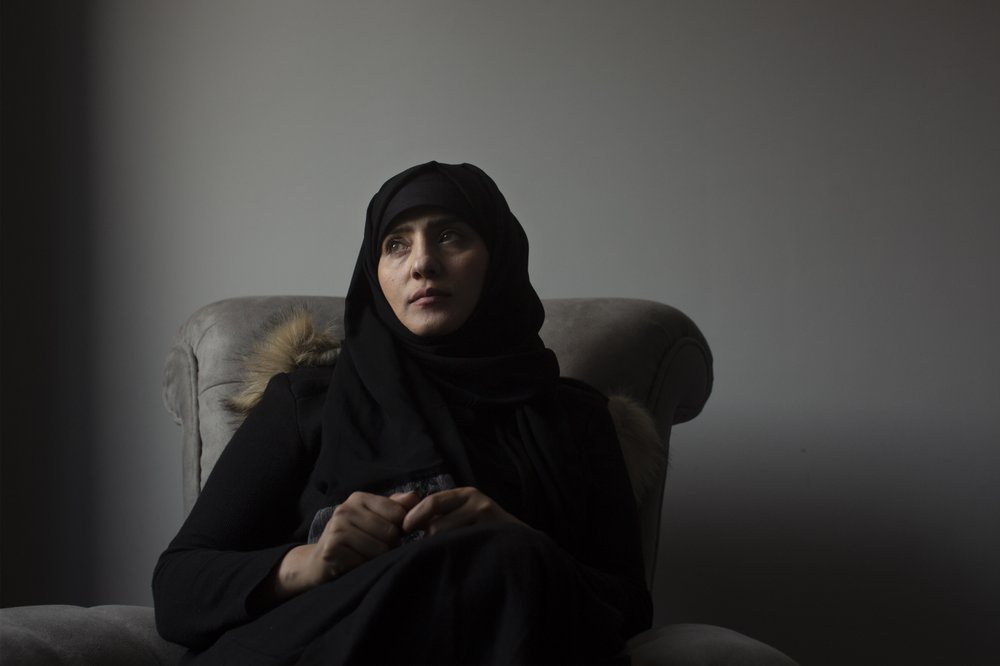 CAIRO (AP) — Samera al-Huri’s fellow activists were disappearing, one by one. When she asked their families, each gave the same cryptic reply: “She’s traveling.” A few of the women re-emerged. But they seemed broken and refused to say where they had been for months.

A dozen officers from the Houthi rebels who control northern Yemen snatched her from her home in the capital, Sanaa, at dawn.

They took her to the basement of a converted school, its filthy cells filled with female detainees. Interrogators beat her bloody, gave her electrical shocks and, as psychological torture, scheduled her execution only to call it off last-minute.

Women who dare dissent, or even enter the public sphere, have become targets in an escalating crackdown by the Houthis.

Activists and former detainees described a network of secret detention facilities where they are tortured and sometimes raped. Taiz Street, a main avenue in Sanaa, is dotted with several of them, hidden inside private villas and the school where al-Huri was held.

“Many had it worse than me,” said al-Huri, 33, who survived three months in detention until she confessed on camera to fabricated prostitution charges, a grave insult in conservative Yemen.

Long-held traditions and tribal protections once guarded women from detention and abuse, but those taboos are succumbing to the pressures of war.

As men die in battle or languish in jail in a conflict now dragging into its sixth year, Yemeni women have increasingly taken political roles. In many cases, women are organizing protests, leading movements, working for international organizations or advocating peace initiatives — all acts the Houthis increasingly view as a threat.

“This is the darkest age for Yemeni women,” said Rasha Jarhum, founder of the Peace Track Initiative, which lobbies for women’s inclusion in peace talks between the Houthis and Yemen’s internationally recognized government.

“It used to be shameful for even traffic police to stop a woman.”

“I’d fallen off the earth”

Systematic arrests and prisons rife with torture have been central to war efforts by both sides, the Iranian-backed Houthis and the Saudi-led coalition trying to oust them, the AP has found.

Yet the intimidation campaign against women, observers say, is unique to rebel-held areas.

Estimates of women currently detained range from 200 to 350 in the governorate of Sanaa alone, according to multiple rights groups. The Yemeni Organization for Combating Human Trafficking says that’s likely an undercount.

Other provinces are more difficult to pin down. Noura al-Jarwi, head of the Women for Peace in Yemen Coalition, estimates that over 100 women are detained in Dhamar province south of the capital, a major crossing point from government-controlled areas into Houthi-run territory.

Al-Jarwi, who runs an informal support group in Cairo for women released from Houthi detention, has documented 33 cases of rape and eight instances of women debilitated by torture.

The AP met with six former detainees who managed to flee to Cairo before the coronavirus pandemic grounded flights and closed borders. Their accounts are supported by a recent report from a UN panel of experts, which said sexual violations may amount to war crimes.

One woman, a former history teacher who asked not to be identified to protect family in Yemen, was swept up in a crackdown on protests in December 2017.

She was taken to a villa somewhere on Sanaa’s outskirts, though she didn’t know where. At night, all she could hear was barking dogs, not even the call to prayer.

“I was so far away, like I’d fallen off the earth,” she said.

Around 40 women were captives in the villa, she said. Interrogators tortured her, one time tearing her toenails out. In more than one case, three masked officers told her to pray and said they would purify her from sin. They took turns raping her. Female guards held her down.

The Houthis’ human rights minister denied the torture allegations and the existence of clandestine women’s prisons.

“If this is found, we will tackle this problem,” Radia Abdullah, one of two female Houthi ministers, said in an interview.

She acknowledged many women had been arrested in a recent anti-prostitution sweep of cafes, apartments and women’s gatherings. They were accused of “aiming to corrupt society and serving the enemy,” she said, referring to the Saudi-led coalition.

A parliamentary committee created last fall to probe reports of illegal detention discovered and released dozens of male detainees in its first weeks of work.

It planned to pursue the issue of women as well. But a Feb. 16 internal memo obtained by the AP complains that the Interior Ministry pressured the committee to end its investigation.

The first major round-up of women came in late 2017, after the Houthis killed their one-time ally in the war, former ruler Ali Abdullah Saleh. The rebels detained scores of women who thronged public squares, chanting for the return of Saleh’s body.

The scope has expanded since, said al-Jarwi. “First they came for opposition leaders, then protesters, now it’s any woman who speaks against them.”

One woman told the AP she was dragged from her taxi at a protest spot, beaten and detained. A peace advocate for a London-based humanitarian group was locked in a Sanaa police station for weeks.

A computer teacher, 48, recalled how 18 armed men broke into her home and beat everyone inside, stomping on her face and screaming sexual insults at her. She had no connection to politics but had posted a video on Facebook complaining that government salaries had not been paid for months. She and her children fled to Egypt soon after.

Al-Huri said when she rejected a Houthi official’s request to snitch on other activists, she was abducted in July 2019 by a dozen masked officers with Kalashnikovs, “as though I was Osama bin Laden.”

She was imprisoned in Dar al-Hilal, an abandoned school on Taiz Street. A fellow detainee, Bardis Assayaghi, a prominent poet who circulated verses about Houthi repression, counted around 120 women held there, “schoolteachers, human rights activists, teenagers.” She said officers banged her head against a table so hard that she needed eye surgery to see properly when released months later.

The head of the Sanaa criminal investigation division, Sultan Zabin, conducted interrogations in the school, al-Huri and Assayaghi said. Some nights, they said, Zabin took the “young, pretty girls” out of the school to rape them.

The UN panel of experts identified Zabin as running an undisclosed detention site where women have been raped and tortured.

At least two villas on Taiz Street have been used to detain women, along with other sites around the capital, including apartments confiscated from exiled politicians, two hospitals and five schools, al-Jarwi and the ex-detainees said.

When the history teacher was released in March 2018, her limp body was dumped under an overpass. Her family refused to see her because of the shame.

In their eyes, “I had gone out to protest, so I deserved what happened,” she said.

Female ex-detainees say the Houthis aim to humiliate them with rapes and allegations of prostitution.

Women are set free only after pledging to stop protesting or posting on social media, and after they videotape confessions to prostitution and espionage.

In Cairo, the women help each other cope and move forward.

Over home-cooked dinners, they gather with their children and recall their city before the war, when they performed poetry and smoked water pipes in bustling cafes, many of which the Houthis have shut down to keep men and women from mingling.

Many still receive threats from the Houthis. None can see their families in Sanaa again.

Al-Huri struggles with insomnia. She knows the Houthis will release her confession soon. But she’s convinced that telling her story is worth the risk.

“There are girls still in prison,” she said. “When I try to sleep, I hear their voices. I hear them pleading, ‘Samera, get us out.’”

Image: In this March 4, 2020 photo, Samera al-Huri, poses for a portrait in her home near Cairo, Egypt. As they grow more politically active, women are increasingly targeted by the Houthi rebels who rule northern Yemen. Hundreds of women have vanished into secret prisons where they are tortured and sometimes raped, former detainees and other activists say. The Houthis deny the claims, but six women who escaped to Egypt spoke to the Associated Press about their ordeals. (AP Photo/Maya Alleruzzo)