TOKYO (AP) — They set records everyone saw coming and others that surprised the experts.

They suffered, and battled, and spoke their truth in ways that hadn’t been heard before.

Over nine days at the near-empty Olympic Stadium, the women of track and field delivered a memorable show, both inside the lines and out.

These are some of the athletes who defined the meet in Tokyo: Allyson Felix, Sydney McLaughlin, Sifan Hassan, Raven Saunders, Elaine Thompson-Herah.

Theirs was a sport in need of a good boost, not only because of the year-long delay sparked by the virus, but because no matter when they returned, Usain Bolt would no longer draw eyes to the track simply by showing up.

The women delivered — not so much with the feel-good, dance-a-minute vibe that Bolt brought, but with a series of inspiring performances and messages that showed the heart of their sport was still beating strong. 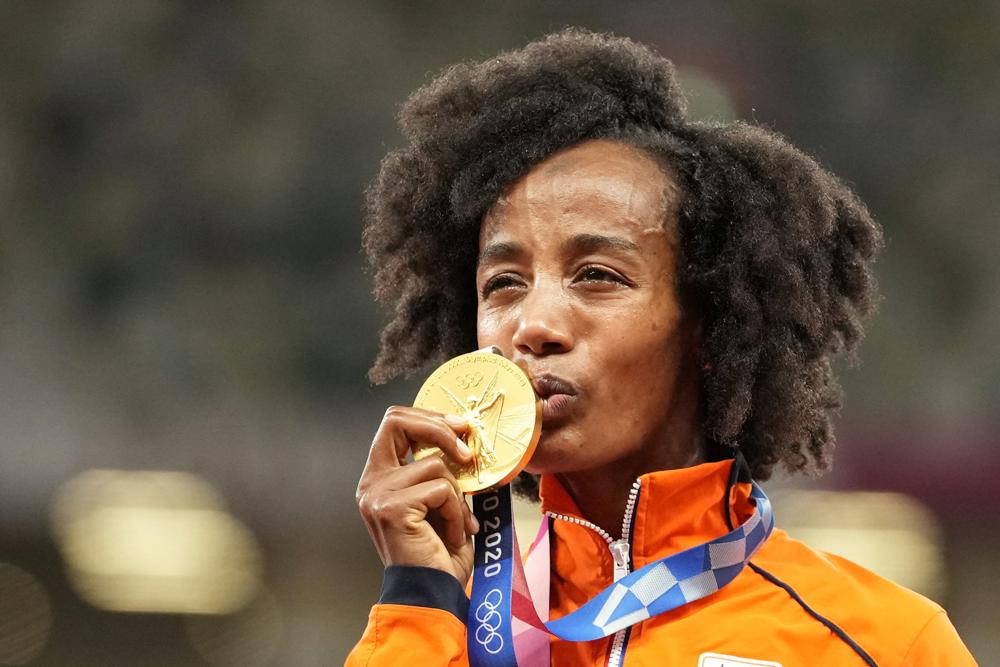 Gold medalist Sifan Hassan, of Netherlands, kisses her medal during the medal ceremony for the women’s 10,000-meters at the 2020 Olympics. (AP Photo/Martin Meissner)

— Hassan and her unrelenting journey toward three medals — two gold and one bronze — in three of the longest races held on the track.

She started with gold in the 5,000 meters, then came back with bronze in the 1,500. She closed the show Saturday with a gold-medal run in the 10,000 — one in which her vision was so clouded by exhaustion that she admitted she could not see the finish line.

“I’m so happy,” she said after the odyssey — six races over eight nights covering 65 laps and 24 kilometers — was finally complete “I’m relieved. I’m finished. I can sleep.” 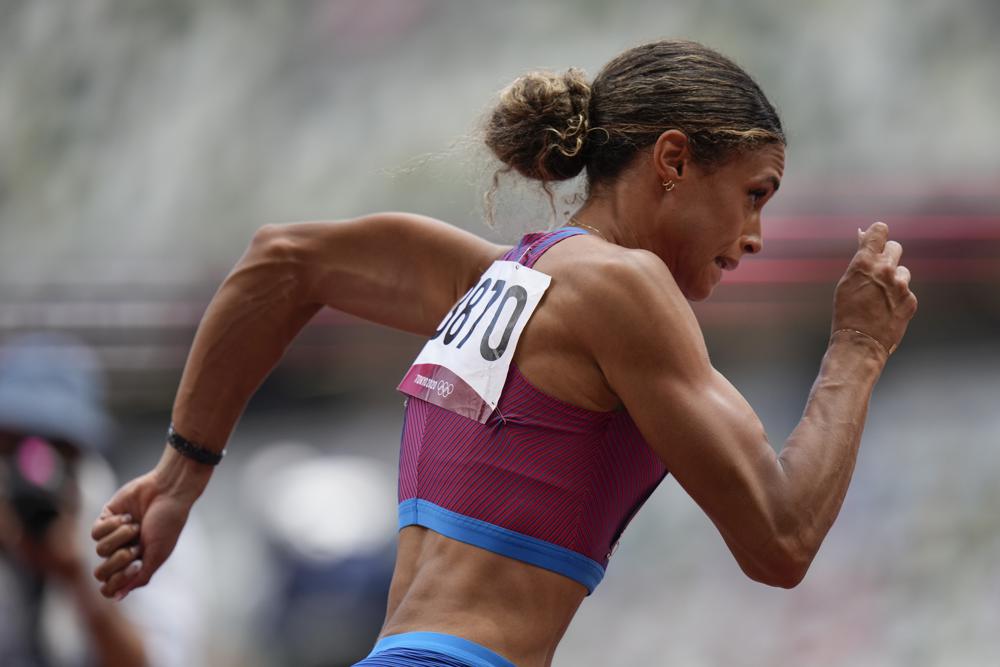 — McLaughlin, whose back-and-forth duals in the 400-meter hurdles with U.S. teammate Dalilah Muhammad reached a crescendo at the Olympics.

It was a race that had been much-anticipated and all but preordained to again reset the world record that one or the other had broken in three previous showdowns.

And they lived up to the hype. McLaughlin lowered her own mark to 51.46 seconds. Just as impressively, Muhammad’s silver-medal time of 51.58 would have been a world record, too.

“I think it’s two athletes wanting to be their best,” McLaughlin said, “and knowing there’s another great girl who’s going to help you get there.”

— The sprinters were fast through the leadup to the Olympics, so it wasn’t all that surprising to see that pace keep going in Tokyo. 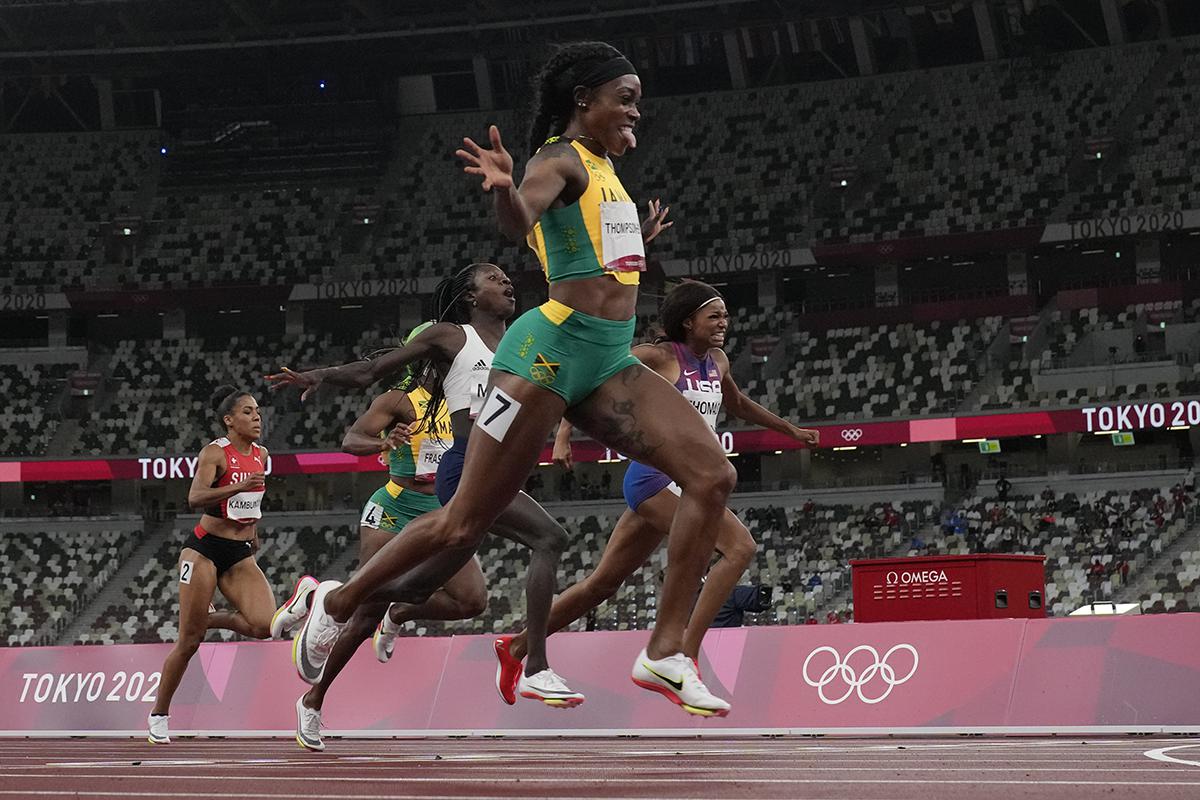 Elaine Thompson-Herah, of Jamaica, wins the final of the women’s 200-meters at the 2020 Summer Olympics. (AP Photo/David J. Phillip)

But while most of the pre-Games buzz went to Jamaica’s Shelly-Ann Fraser-Pryce (100) and American Gabby Thomas (200), each of whom briefly staked their claim as the second-fastest women in history at their respective distances, it was Thompson-Herah who wound up there in the end.

After a slow start to the season because of an Achilles injury, Thompson-Herah swept the 100 and 200 sprints for the second straight time. One more like that and she’ll match Bolt.

She ran the 200 in 21.53 and set the Olympic record in the 100: 10.61 seconds. Though that record might not be the most formidable of the marks Florence Griffith Joyner set a generation ago, in 1988, it had been around every bit as long.

“By the Olympic finish, I’ll probably see what I’ve done,” said Thompson-Herah, who at 29, assures us she is not done yet. “At this moment, I’m just a normal girl.” 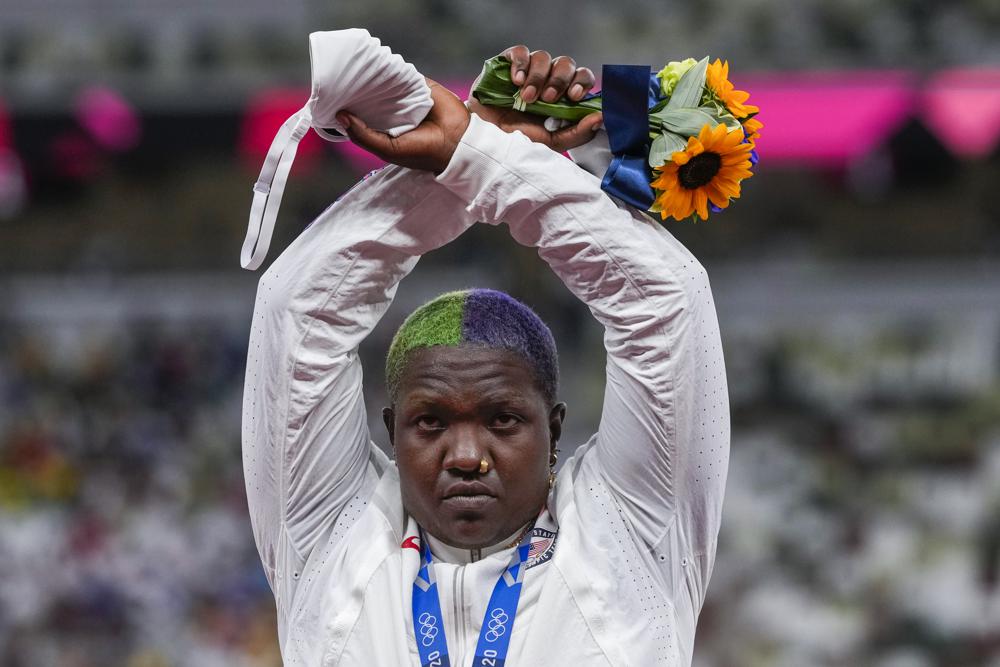 Raven Saunders, of the United States, poses with her silver medal on women’s shot put at the 2020 Summer Olympics. (AP Photo/Francisco Seco)

— The story of Raven Saunders was inspiration for anyone who has been overlooked or left behind. The Black, gay American shot putter started wearing “Incredible Hulk” masks to the field — a way of projecting her fierce competitive spirit, but also a lighter side underneath.

After she received her silver medal, Saunders crossed her arms and formed an “X” on the medals stand. “The intersection of where all people who are oppressed meet,” she explained.

It was the sort of message many believe should not only be tolerated, but embraced, when Olympic athletes get their all-too-short time in the spotlight. The IOC, which after much debate and discussion over the past two years still chose to ban such demonstrations, said it would look into it. Any probe was set aside when Saunders’ mother died unexpectedly only hours after she won the medal.

— And Felix closed the show.

For five Olympics spanning 16 — make that 17 — years, she was epitome of class and speed. At 35 years old, she called it a career, but not without doing what she does better than any runner alive: Winning medals.

Felix has more to do. Since having her baby, Cammy, in 2018 she has transformed herself into one of the most outspoken advocates for women in sports.

“I feel like it’s definitely been a journey for me to get to the point where I guess I had the courage to do so,” Felix said.

She earned the platform with two decades of racing in which she won some, and lost some, and kept on coming back for more.

Now, it’s time to see who takes her place.

Earlier in the meet, someone asked Muhammad, the hurdler, what she thought about all this women’s dominance at the track – of America’s seven gold medals in track and field, they won five.

“Women do it better,” she quipped.

After watching them conquer records, overcome obstacles and make their messages heard over nine days and nights at the Olympic track, it was hard to say she was wrong.