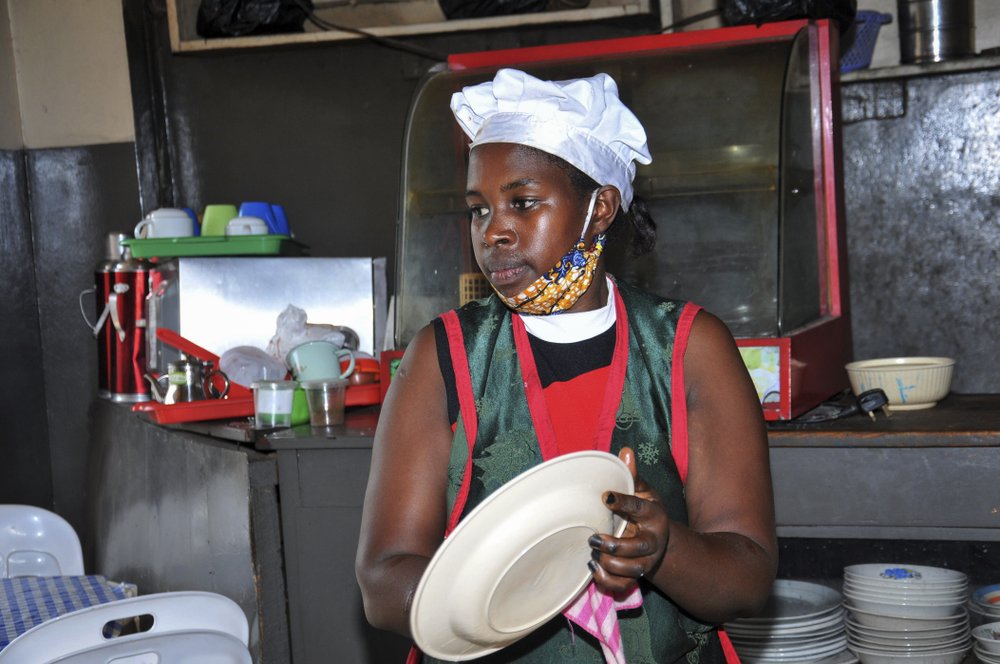 KAMPALA, Uganda (AP) — Rebecca Nakamanya rolls her eyes, dismissing a question about school fees. What really worries her is how to feed three children and a jobless partner on a daily wage of less than three dollars, minus transport to and from her job as a cook.

“We have not even started thinking about school fees,” she says. “When we don’t have what to eat? When the landlord is also waiting?”

In the usually bustling labyrinth of shops surrounding a bus terminal in Uganda’s capital, Kampala, she and other women sit idle in their open-air restaurant, waiting for customers who rarely come.

They are fortunate to be working at all. Business has been so poor under coronavirus lockdown measures that their nearest rivals have shut down. Their restaurant remains open mainly because the landlord deferred rent payments, a rare gesture of goodwill.

The COVID-19 pandemic means that millions of women in Africa and other developing regions could lose years of success in contributing to household incomes, asserting their independence and expanding financial inclusion.

Often they are paid at the end of each day, a hand-to-mouth existence that has consequences for the whole family when business is bleak. Now many are increasingly under pressure as they deplete their savings and landlords threaten eviction.

The impact of COVID-19 “has the face of the women,” especially in Africa, Bineta Diop, an African Union special envoy, told reporters this month.

Although lockdown measures have affected 81 percent of the global workforce, “women’s economic and productive lives will be affected disproportionately and different than men,” the United Nations said in April.

“Across the globe, women earn less, save less, hold less secure jobs, are more likely to be employed in the informal sector. They have less access to social protections and are the majority of single-parent households. Their capacity to absorb economic shock is therefore less than that of men.”

More than 70 percent of African women in non-agricultural jobs are employed in the informal sector such as street and market vending, work that requires no diplomas, resumes or formal approval. They don’t pay taxes, but in difficult times that means they’re not likely to benefit from government relief.

In Uganda, which had 848 confirmed coronavirus cases as of Sunday, authorities say restrictions on close-contact businesses such as beauty salons are necessary to prevent a sharp rise in infections. Many men also work in the informal sector but vehicle mechanics, metal fabricators, taxi operators and carpenters — who are often men — are now allowed to operate.

The numbers suggest “women’s employment is likely to be hit more severely than men’s by the current crisis,” it added.

Many women face further distress as some local authorities in Africa, claiming to be improving infrastructure and protecting citizens, tear down dilapidated markets and restrict access to public spaces in which women are more likely to work. Such demolitions have been reported in Congo, Zimbabwe and Kenya.

In a report this month the humanitarian group CARE said the pandemic has “a disproportionate impact on the very women entrepreneurs who have worked hard so hard to lift themselves out of poverty.” It cited Guatemala, where 96 percent of women entrepreneurs benefiting from the group’s programs can no longer afford basic food items.

The international response to the pandemic “needs to include a strong focus on the economic justice and rights of women” to retain progress made over decades in gender equality, said Reintje van Haeringen, a CARE official.

Grace Twisimire, 25, operates a once-thriving shop in Kampala. She said she now can go hours without selling even a pair of plastic clogs that go for less than $2. She quickly rises to her feet when a potential customer passes by, then slowly settles into her seat when they walk away. Dust has settled over the jeans hanging by the doorway.

“There is no money now,” she said. “There are no people. I don’t know, but if business does not improve I may go back to the village.”

In the streets of Kampala women squat on curbs, selling everything from passion fruit to undergarments. But they must look out for law enforcement officials who occasionally swoop in to confiscate goods sold in undesignated markets. Recently there was public anger after men in military uniform were seen whipping women carrying baskets of fruit on their heads.

“We just run. Otherwise they will take our things,” said Gladys Afoyocan, a basket heaped with passion fruit in her lap. “I do this for my children. Our children must stay alive.”

The mother of five now needs a week or longer to sell a single bag of fruit. Before the outbreak, two days were usually enough.

Even relatively comfortable entrepreneurs such as Marion Namutebi, who runs a restaurant specializing in local delicacies, have shut down operations and furloughed workers until further notice. This is the first time she’s had to close since since the restaurant opened in 2014.

“Business was just not adding up,” she said. “For many people, going to the restaurant is now a luxury.”

Image: In this photo taken Saturday, June 20, 2020, Rebecca Nakamanya works at a restaurant near a bus terminal in capital Kampala, Uganda. The COVID-19 pandemic means that millions of women in Africa and other developing regions could lose years of success in contributing to household incomes, asserting their independence and expanding financial inclusion. (AP Photo/Ronald Kabuubi)