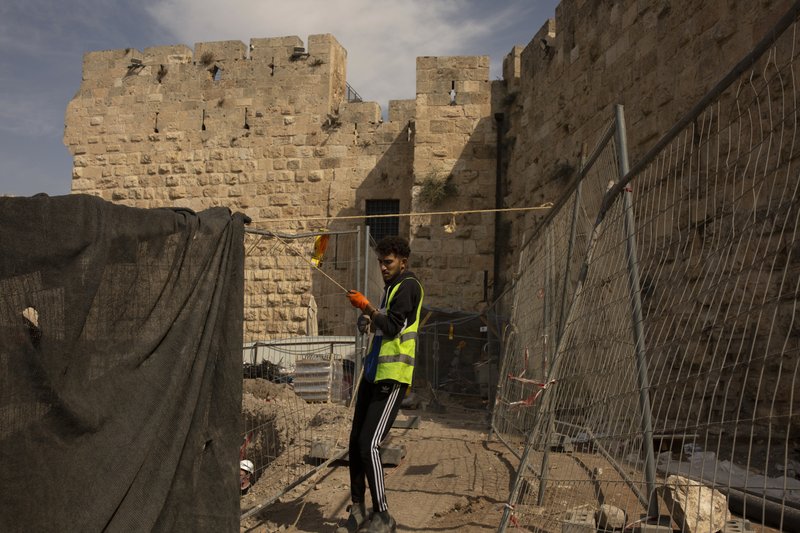 JERUSALEM (AP) — The coronavirus pandemic may be keeping tourists away from Jerusalem’s ancient citadel, but it has created a rare opportunity for the site to launch a massive restoration and conservation project.

In the process, Israeli archaeologists are studying the bastion’s medieval past in the hope of learning more about the holy city during the Crusades.

The Tower of David, the Old City’s iconic fortress, contains remnants of successive fortifications built one atop the other stretching back over 2,500 years. For centuries, pilgrims, conquerors and tourists visiting the city that is holy to Judaism, Christianity and Islam have passed beneath the stronghold’s towers through the adjacent Jaffa Gate.

The Tower of David Museum’s $40 million undertaking, financed in large part by the Clore Israel Foundation, Israel’s Tourism Ministry and Jerusalem’s municipality, seeks to preserve the ancient site and revitalize the museum a generation after it opened to the public in 1989.

The citadel drew over half a million visitors in 2019, making it one of the city’s most visited sites. But after Israel shut its borders in response to the coronavirus pandemic in March, tourist numbers have dropped to virtually zero.

While the citadel stood empty of visitors, restoration work got underway in July. The galleries were gutted of their old exhibits and excavations began in the fortress’s courtyard.

“This is the jewel of the crown, because there’s no other site in Jerusalem that will tell you, from the finds, from the remains, the full story,” Eilat Lieber, the Tower of David’s director and chief curator, said Wednesday. She said the museum is embarking on a total redesign of its exhibits with cutting edge media to tell the city’s history, and the renovations are slated for completion by early 2022.

The overhaul includes improved accessibility, the construction of a new visitor’s center and entrance, and the addition of new galleries and educational space in an unused area beneath an adjacent roadway.

The undertaking has also allowed archaeologists to excavate previously unstudied areas of the fortress, particularly sections dating to the Middle Ages.

“All the massive renovation that is going on right here is a really rare opportunity for us archaeologists,” said Amit Reem, a Jerusalem archaeologist with the Israel Antiquities Authority. “It’s a pity to say, but the coronavirus enabled the Tower of David Museum to close the museum because there are no tourists, no visitors, and dedicate this period of time to the renovation and to the archeological project.”

Although many layers of the citadel’s history are visible to visitors, Reem said the tower’s form during the Middle Ages — the period of the Crusades and their aftermath — remains unclear.

Jerusalem fell to the First Crusade in 1099 and traded hands between Christian and Muslim powers several times in the subsequent centuries.

“We have the chance to explore the citadel from the perspective of modern archeologists,” he said, using advanced technology to render 3D images of the remains from each time period.

Reem and his team recently excavated and studied an unassuming underground chamber beneath the stronghold’s western tower. The museum had used it as a storeroom, but it proved to be a medieval cesspit with a long tunnel running beneath the city walls.

“We hope to find in the floor and under the floor some material that we will scrutinize by microscope, maybe to find to learn about the diet of the people here, about disease,” he said.

Image: A worker places netting at a construction site inside the Tower of David Museum in the Old City of Jerusalem, Wednesday, Oct. 28, 2020. Jerusalem’s ancient citadel is devoid of tourists due to the pandemic and undergoing a massive restoration and conservation project. The Tower of David, the Old City’s iconic fortress, contains remnants of successive fortifications built one atop the other stretching back over 2,500 years. (AP Photo/Maya Alleruzzo)