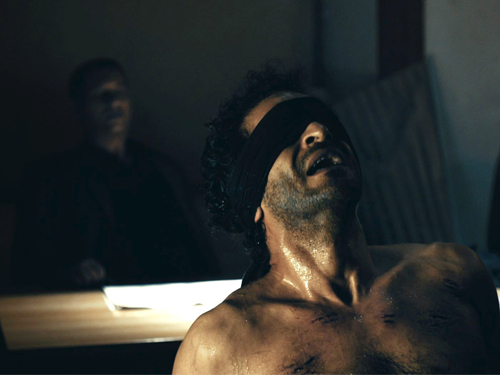 VENICE — “Amr Nagi Ismail,” says the mother, stating her son’s name to an edgy police officer. She has been desperately trying to find him since he was kidnapped by the State Security Investigative Services.

This scene, among many others in “Winter of Discontent” — currently screened at the 69th Venice Film Festival as part of the Orizzonti section — reveals aspects of the tyrannical state in pre-revolutionary Cairo and its effect on people’s lives.

The very choice of the son’s name is also revealing. It is a common feature in director Ibrahim El Batout’s films for characters to share their first name with the performers (in this case, actor Amr Waked). But the fact that Nagi Ismail is actually a young Egyptian filmmaker who was arrested for a couple of days in Cairo in the aftermath of the protests, a seemingly trivial detail, comes as key to apprehend the level of permeability between fact and fiction that Batout worked into this film.

Batout’s fourth feature film starts with a subtle opening sequence. Amr, a hardly politicized young man whose career has to do with software and media, wakes up to the morning of 25 January 2011. We experience the news of the protests breaking in the heart of Cairo through his opaque reactions and his subsequent precautionary measures. The ominous mood — heightened by the meditative camerawork and carefully constructed, ambient soundtrack — climaxes as Amr watches a YouTube testimonial video of a man who was arrested, tortured and electrocuted by the police. The poignant testimony belongs to Batout’s brother himself.

The story expands to include the other two main characters. Farah (Farah Youssef) is a talk show TV host, perplexed between communicating the real state of the country during the early days of the revolution and her superiors’ policy of deception. And Adel (Salah al-Hanafy) is a dead-inside state security officer who supervised Amr’s torture and the investigations of randomly arrested groups of protesters.

As the narrative spans between the three characters, it also paces between 2011 and 2009, digging into the backstories behind Amr, Farah and Adel’s intersection.

From windows that open to blocks of walls, to the labyrinthine rooms inside the state security headquarters, the film sets up a claustrophobic subtext that connects the different characters together and maps the psyche of the oppressed. Such a pungent approach wanes in the second half of “Winter of Discontent,” as the narrative — and the whole mood — leans toward a more direct delivery of the revolution landmarks, such as swerving TV presenters and makeshift public checkpoints, up to the film’s formalistic finale.

Batout dodges most of the traps on the road of putting together a film about the revolution, by making the daring choice of avoiding the colossal aspects of it. He rather constructs the same image using immaculate details. Up until the very end of the film, no footage of Tahrir Square or any of the other protests is shown. Obviously, what appeared in the squares and the streets during those days is universally phenomenal, but it is the preliminary point of resilience where it came from that shows the revolution’s real scope.

“Winter of Discontent” attempts to bring into perspective the rest of the iceberg, unseen under the surface, and for most of it, the film succeeds.