The death sentences handed down Thursday by a court in the pro-Russian, self-proclaimed Donetsk People’s Republic (DPR) to three British and Moroccan volunteers in the Ukrainian armed forces have drawn condemnation from politicians who insist they must be treated as prisoners of war.

British citizens Aiden Aslin and Shaun Pinner, and Moroccan national Brahim Saadoune — were foreign fighters who had been captured in the Ukrainian city of Mariupol by Russian forces in April, according to DPR authorities.

The court in the DPR accused them of being “mercenaries” for Ukraine, according to Russian state media outlet RIA Novosti.

However, the Ukrainian government said in a statement on Wednesday that it considers all foreign volunteers to be members of its armed forces and to be lawful combatants entitled to treatment as prisoners of war under the Geneva Conventions.

British Foreign Secretary Liz Truss also said “they are prisoners of war,” and that the ruling was “a sham judgement with absolutely no legitimacy.”

A spokesperson for British leader Boris Johnson said Friday that the Prime Minister was was “appalled” at the sentencing.

“We completely condemn the sham sentencing of these men to death. There’s no justification at all for this breach of the protection they’re entitled to,” the spokesperson said.

According to the 1949 Geneva Convention, prisoners of war are “members of the armed forces of a party to the conflict as well as members of militias or volunteer corps,” or “members of other militias and members of other volunteer corps” who meet certain conditions, including: carrying arms openly; acting within the laws and customs of war; “being commanded by a person responsible for his subordinates;” and having “a fixed distinctive sign recognizable at a distance.”

Some context: Russia is the only country that considers the DPR independent. The DPR government is not an internationally recognized government; therefore, the court’s decisions are not considered legitimate by the international community. Independent watchdog groups have long accused the separatists of a dismal human rights record and ill-treatment of prisoners. 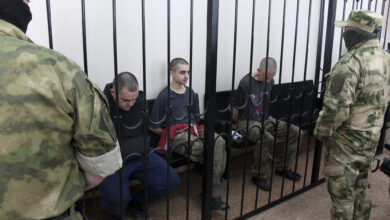 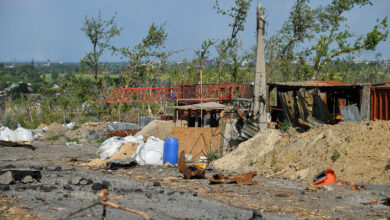