I was astonished by the interest readers have shown in my article from last week where I criticized Alaa Mubarak’s vision and stance on the incidents that took place after the Egypt-Algerian World Cup qualifying match. I received countless comments via email and phone.

Although most readers agreed with the core argument of the article, a considerable number of them differed with me in their belief that Alaa Mubarak’s reaction was spontaneous and heartfelt. They argued he had no political motives and openly expressed what most Egyptians were feeling. I understand this point of view, although I still disagree with it for reasons I will explain later.

However, what grabbed my attention was that some people were so enthusiastic about Alaa Mubarak that they endorsed him for the presidency. I would like to pause to contemplate the significance of such an endorsement at such a unique historical point in the development of the Egyptian political regime. But first, please allow me to make some general comments on this manner of dialogue, which renders discussion almost useless.

When an issue is raised for debate, anyone who wishes to engage in a fruitful dialogue should carry out the following procedural steps: 1) Focus on the core arguments of the disputed matter, 2) determine precisely what is being contested, 3) propose solutions or an alternative point of view.

Instead, we tend to address secondary issues and minute details, which we perhaps find more appealing, although they distract us from the matter in question. We neither exert enough effort to determine which points are being debated, nor do we care enough to propose alternative viewpoints or solutions. I would like to emphasize the following points:

1) I did not object to Alaa Mubarak’s right to offer his opinion as an Egyptian citizen, although he is widely known to be reluctant to participate in politics and in public. I objected to the content of what he said. If Alaa Mubarak has the right to express his view, then I expect others to not deny me the same right to disagree with him and respond to what he said.

2) I do not disagree with the President’s son for personal, ideological, or political reasons, rather I differ with him on what constitutes Egypt’s core interests. Since the political awareness of someone who was raised in the presidential palace is supposedly higher than that of other citizens–even if he is not involved in politics or public work–I was astonished, and even angered by his response. By ignoring the consequences of his statements, Alaa seemed to be saying the same thing as the public, although the core issue was about politics, not sports.

3) Some people saw in my stance a justification for the actions of the Algerians. This was quite odd, since I literally said, "The mistakes made by the Egyptian spectators do not justify what the Algerian spectators have done, especially the burning of the Egyptian flag in the streets of Paris and Marseilles, and the attacks on Egyptian offices and companies in Sudan and Algeria."

I expected Alaa Mubarak to speak in a more poised manner to help calm the situation and not fuel the fire, while at the same time upholding the rights of Egyptians. He could have, for instance, called for the formation of a fact-finding committee to determine who was responsible for the problem, punish the perpetrators on both sides, assess the damage and carry out the necessary procedures to provide adequate compensation.

I wrapped up my article by saying, "I am not against kicking out the Algerian ambassador and recalling the Egyptian ambassador to Algeria if doing so will restore the dignity to Egyptians that football fans threatened in these exceptional circumstances. Still, we have to realize that the dignity of Egyptians is not divisible."

Let me move on to examining the significance of the public call to endorse Alaa Mubarak, which, in my opinion stems from three possibilities:

First, a section of Egyptian society seems convinced that Alaa Mubarak defended Egyptian dignity and spontaneously expressed the feelings of the people, at a time when spontaneity and defending dignity have become less common. However, an important question remains: Does the spontaneous expression of one’s opinion make one qualified for the presidency?

Second, a segment of Egyptians wanted to express their opposition to Gamal Mubarak’s nomination for the presidency, perhaps because, in their view, he represents a haughty minority of businessmen and an opportunistic segment of the population that does not care about anything except wealth and power.

Third, this segment has finally accepted the inevitability of the transference of power, but still believes in the possibility of introducing improvements to the inheritance plan by offering two possible nominees to the presidential palace.

In this light, the nomination of Alaa Mubarak can be seen as an implicit rejection of the reelection of Mubarak for a sixth term, perhaps for reasons related to age, as well an implicit rejection of Gamal Mubarak. Since only Alaa, who seems like an ordinary man who goes to markets and attends football matches without exaggerated or provocative protection, is left, then it seems plausible to pick him as the nominee.

Most likely, these football spectators did not intend to literally endorse Alaa for the presidency. It is likely they just wanted to express appreciation for what Alaa Mubarak said, which reflected a desire to protect Egyptian dignity.

In spite of this, the endorsement of Alaa Mubarak, even out of gratitude, carries messages worthy of contemplation. The public may have been expressing that they reject the restrictions imposed on the endorsement of independent candidates for the upcoming elections.

I am not sure if the public is aware of the difficulties that Alaa Mubarak could face if he wishes to run in the election. According to the constitution, he cannot run because he is not a member of any political party. Therefore, he should immediately join a party that was established five years before the date of the upcoming presidential elections.

If he wishes to nominate himself as an independent candidate, he must first obtain the written approval of 250 elected members of legislative and local councils, a condition that may not be unattainable for someone like Alaa Mubarak, who can easily use his personal contacts to obtain the necessary approvals.

There also seems to be other insurmountable obstacles, if the ruling party nominates Mubarak, then Alaa Mubarak will have to run against his own father.

If the ruling party opts for the secretary of the Policy Committee, which will only take place if Mubarak does not run for another term, then Alaa Mubarak will be running against his own brother. It is true that he will be in a better position to win, especially if he runs as an independent candidate, but the entire situation will be highly embarrassing in both cases.

Although I am convinced Alaa Mubarak will never run for the presidency for the reasons discussed previously, I suggest that the Egyptian public enthusiastic about such a nomination continue to exert pressure for two reasons: to expose the problems with Article 76 and to open the door for the nomination of other independent candidates, such as Mohamed ElBaradei.

A very important positive development will have been achieved if this takes place. I am under no illusions, but I hope that this analysis has shown that we are up against a political regime that must be broken. 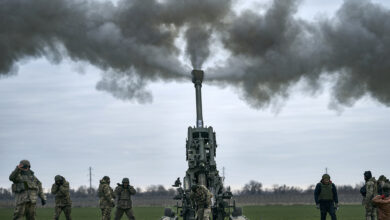 Atmospheric rivers aren’t just a problem for California. They’re changing the Arctic, too