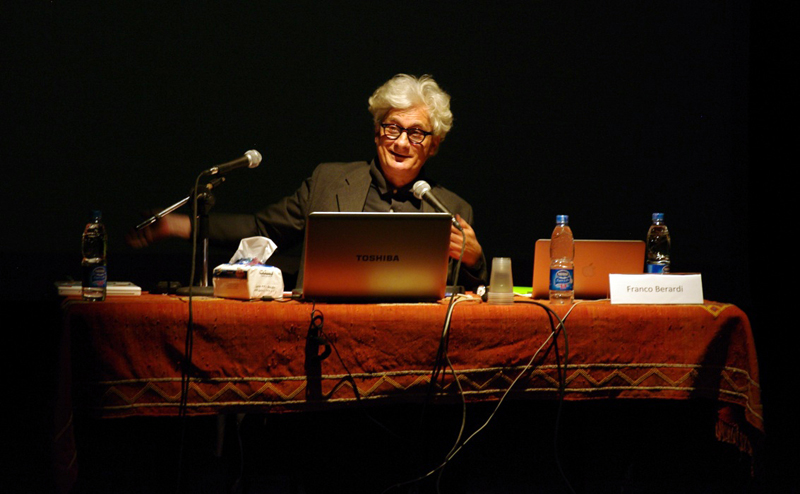 In his lecture performance at the Alexandria Contemporary Art Forum’s symposium “Times are changing, what will art do about it?” artist Hassan Khan narrated a story inspired by Egyptian mystery tales he used to read as a child. A man finds an old notebook and as he starts reading he realizes that the tale is awakening a distant memory of his childhood, when he used to read mystery tales.

Khan entitled his lecture “The first lesson I remember learning is that humiliation exists” in response to a question that is being raised over and over: Does the artist have a responsibility to react to a particular event in history? Does the revolution have to be a source for an artist’s work?

Khan was not concerned with giving an elaborate explanation to this recurrent question (his answer is simply “no”). He rather used a combination of forms including literature, music, performance and fiction to engage the audience in an immediate relationship with a personal experience of transformation. The performance “spoke” of how the intimate experience of an event that leads a transformation in one’s mind can resonate at many levels of consciousness at different moments in time.

In the past 18 months questions surrounding whether times are changing and what art should do about it have circulated in the media, social networks, art scenes and culture funding networks in Egypt and elsewhere. Last week ACAF provided a space for a conversation about these issues with a group of international speakers from various backgrounds spanning philosophy to education to art practice.

While some speakers elaborated, translated and abstracted ideas about change to provide responses, others performed acts with meanings in themselves. The opportunity to listen to a plurality of voices and languages was a step beyond the condition of a constructive attitude where solutions are promised and resolutions are made. In many instances the questions raised were themselves questioned.

What does change mean?

"There are some moments in history when something happens … and there is the need to get together and find out what just happened," says Claire Davies, an art historian, who moderated a debate during the symposium.

Similarly, Italian philosopher Franco "Bifo" Berardi asks, "When something happens, what happens next?" implying that that second “something” could perhaps be change.

But this feeling of uncertainty and expectation about the effects of change on reality is not a prerogative of intellectuals.

In an age of rating agencies determining the economic fate of sovereign governments, corporations operating above the law, elected rulers being replaced by technocrats, proclamations of the death of multiculturalism by state leaders, Occupy Wall Street, the Indignados and many other spontaneous horizontal movements emerging everywhere, China showing its soft power to acquire cheap oil in Sudan, new geopolitical configurations of economic power like the BRICS (Brazil, Russia, India, China and South Africa) and the Arab Spring entering its fifth season, the most pressing questions about the effects of change do not pertain to art alone.   All participants of the symposium agreed on the philosophical failure of our times in making sense out of these critical historical changes.

"This is a time when we are all called to be philosophers” said theorist Aaron Schuster, “but in the sense that we can no longer think of philosophy as a separate academic subject, rather as a way to think and shape our lives."

In his captivating presentation "18 theses for change," he explained that the semantics of change have changed: The representation of change has become the change itself. Elections = democracy. A black man in the white house = the defeat of racism in the US. Drawings on walls = artistic freedom. This is the only change we can (or are allowed to) believe in.

In the program introduction, ACAF referred to something happening at the end of 2010 and since then the pace of breaking news, accessible from different sources simultaneously, has become so overwhelmingly fast so that we start grasping a sense of the present just as it disappears. We are living in the illusion that we are in control of time, but as our daily life is filled with more and more information, we realize that our attention cannot be multiplied indefinitely.

Dutch researchers Robin Van den Akker and Timotheus Vermullen have collected examples of popular aesthetics in contemporary literature, music, fashion, photography, social theories and architecture in order to identify a configuration of "metamodern" sensibilities. The metamodern is an attempt to transcend the limitations of postmodernism, which has fallen into its own vicious circles of deconstructionism.

Their Notes on Metamodernism project suggested the creation of a new language to communicate within the increasing complexity of the world system, a language that surpasses ideologies and speaks by oxymorons such as moderate fanaticism, pragmatic idealism, informed naivety. "One sure thing is that we will constantly have to adapt. There is no comfortable place to sit in and stay," said Van den Akker. We are forced to take positions, though not always permanent ones.

But the metamodern also risks becoming a failure itself since modernity is its guiding unit, and modernity assumes a temporal linearity.

Some argued that insisting on searching for a new name to define this historical period using a terminology based on the same idea of linear progress that generated concepts like modernity and post-modernity comes from the obsession to freeze too hastily a reality in constant flux, and from the assumption that the future is predictable.

Speakers insisted on the need for a reactivation of language: “a reactivation of the ability to feel” that “unprecedented change is possible,” said Bifo.   Many stressed the need to build (more than deconstruct) a new vernacular capable to escape dichotomies. This can only be a collective project, capable of allowing a form of communication that goes beyond information, and here, art can contribute.

What does change mean for art?

"The genie is out of the bottle," said curator and writer Rasha Salti in her presentation of emotional, ironic, sometimes heartbreaking images produced by Syrian activists in the past year. In the cases she selected artistic practice is consciously, sometimes naively used to convey emotional involvement. In “the art of insurgency" as she called it, memories of other struggles are resurrected, new symbols are created and different forms of expression are combined, working on language as a daily practice that constantly evolves and resists definitions. "The instantaneous process of cross fertilization through technology is a new phenomenon that mixes different genres and archives," she claimed.

But it is not only revolutionaries who are consciously and unconsciously engaging with art. Salti showed examples of pro-Syrian President Bashar al-Assad campaigns that went viral on online social networks, reminding that in all Arab countries that have witnessed uprisings, governments produced and distributed their own multimedia footage to promote their version of events.

But art, state and revolutions have a triangular relationship that goes back in time.

Artist Ahmed Nagy spoke of the legacy of former President Gamal Abdel Nasser in engineering art and culture spaces in his state-building project following the 1952 anti-colonial coup d’etat. In a way, the period framed a rigid, distinct role for art in revolutionary times. He compared this to the neo-liberal turn of the 1980s and 1990s when the state didn’t interfere as deeply in the cultural field, allowing artists to experiment in new languages, beyond seeing art only as a propaganda tool for revolutionary values.

This experimentation, however, has not just been a moment of emancipation.

Erden Kosova also pointed out how art can be instrumentalized by politics and gave an account of the expansion of contemporary art in Turkey in the 1990s when artists started problematizing the taboos of the republic and dared playing with icons, Islam, the Turkish flag or Ataturk's portrait. "The state didn't give any support to the arts so artists felt freer from the need to be grateful to economic supporters and experimented more with modes of production and distribution,” Kosova said. Independent art movements appeared parallel to a harsh crackdown on street politics. Later, as private funding flooded Turkey's art scene, “the raw kind of disappeared,” Kosova said, suggesting that contact with capital and awareness of having a space in the market has somehow "gentrified" art spaces and practices.

In a context where the space given to art is increasingly dependent on the message it carries, attempting to respond or refusing to respond to the wrong questions about art can be an opportunity to deconstruct the hegemonic language they refer to.

This resistance becomes relevant amid the celebration of “revolutionary art” and artists, which often encourages a specific direction, and thus restricts, if indirectly, artists’ horizons. It often happens that only a certain kind of art is forcibly inserted into a category like "revolutionary” because it serves a particular, partial narration of what the revolution is supposed to mean, trying to orient its future direction, putting a label on something that is still in flux.

In the symposium, some artists seemed to be saying that "what I am saying is important and that’s what matters." Others, by refusing to directly address the questions, simply seemed to say "I am speaking my own language that you might not understand" — like Nagy with his trance multimedia performance interrupted by morphing images of microscopic biological transformations. Another example was Boris Ondreicka with his poetic excursus on the transformations of contemporary music genres in the last three decades — from pop to rock to post-rock to punk to sub-pop to grunge to metal and so on — showing how in the last century there has been a permanent need to coin new labels at an increasing pace. His lecture engaged the audience on parallel sensorial levels through fast images of artistic (at times subversive) elaborations of icons often in dissonance with the content of his speech, insisting that “art is more how than what.”

Art, like language, is a performative realm that can be constructive, pointless, straightforward, enigmatic and so on. It can be a strategy as a form, and not necessarily through the message it carries.