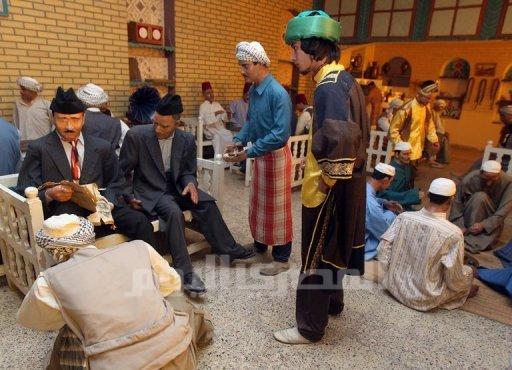 Baghdad's version of a wax museum features figures that depict Iraq's past rather than replicas of celebrities like Michael Jackson, offering a distinctly different experience from Madame Tussauds.

Eschewing the Western model, Baghdadi Museum provides a window into a time before Saddam Hussein, the eight-year war with Iran, the invasion of Kuwait and subsequent sanctions, and the 2003 US-led invasion and its aftermath.

Sculpted works of wax and plaster depict scenes of Iraq from about a century ago, with women standing in balconies, men in barber shops and artists hard at work.

Other exhibits show Sufi ceremonies or marriages, and women in Turkish baths — all carefully recreated in the museum, located inside an elegant Ottoman-era house.

Formerly an archaeological museum founded by British adventurer Gertrude Bell, the building lies in Baghdad's old Baab al-Muadham area near the banks of the river Tigris.

The museum has more than 500 figurines, which were fabricated there. Sets, lighting and costumes are neat, the street scenes are clean and well-lit, and there are no weapons in evidence.

This contrasts sharply with Baghdad today, which is marked by high concrete walls to guard against explosions, pothole-riven streets, and numerous checkpoints manned by assault rifle-armed members of the security forces.

Iraq is still recovering from decades of war, sanctions and dictatorship, and a number of children and young adults have missed the opportunity to learn about the lifestyles of their ancestors.

Baghdadi Museum aims to fill this gap, and occasionally uses storytellers and musicians to convey the message.

Sina Mohamed, the director of a school in Baghdad, accompanied a group of some 75 joyous children all around six years old.

This "is important for the children, both for them to have fun, and to learn their history," Mohamed said.

This is also the view of 32-year-old Riad Khamis, who came to the museum with his family from a nearby town.

"I am with them [here] as my father was with me. One day, my children will also bring theirs," he said, gesturing to his two children.

The idea is to promote a message of "peace, love and culture," the museum's director Bassem al-Anizi said.

"It is good to preserve Iraqi culture in a world that has become a small village.

"Iraqi children desperately need to be educated about the past," he said.

Despite the similarities, the museum, which opened in 1971, was not inspired by the famous Madame Tussauds wax museum in London.

Rather, the mayor of Baghdad at the time had the idea during a visit to Tehran, Anizi said, and it was progressively developed up until the 2003 US-led invasion of Iraq.

The period following the fall of Baghdad in 2003 was difficult, Anizi said.

Barricaded in the museum with a dozen other employees, he had to fight off "gangs of looters" that ravaged both government buildings and museums in the capital.

The museum's premises and collections have since been damaged by the explosion of three car bombs. The facility reopened in 2008, after having closed in 2003.

Today, Anizi is in search of a site to open a new branch that would hold figurines of 55 people who helped shape Iraq, including its first king, Faisal and Gertrude Bell.

"We will begin the project as soon as we have a good site," he said.

Asked if it might include dictator Saddam Hussein, who was executed in 2006, Anizi was diplomatic.

"It is possible to include all those who led Iraq, whether they were a tyrant like Saddam or someone as good as Faisal. We must let the people judge for themselves. Our job is to document history, not to write it."