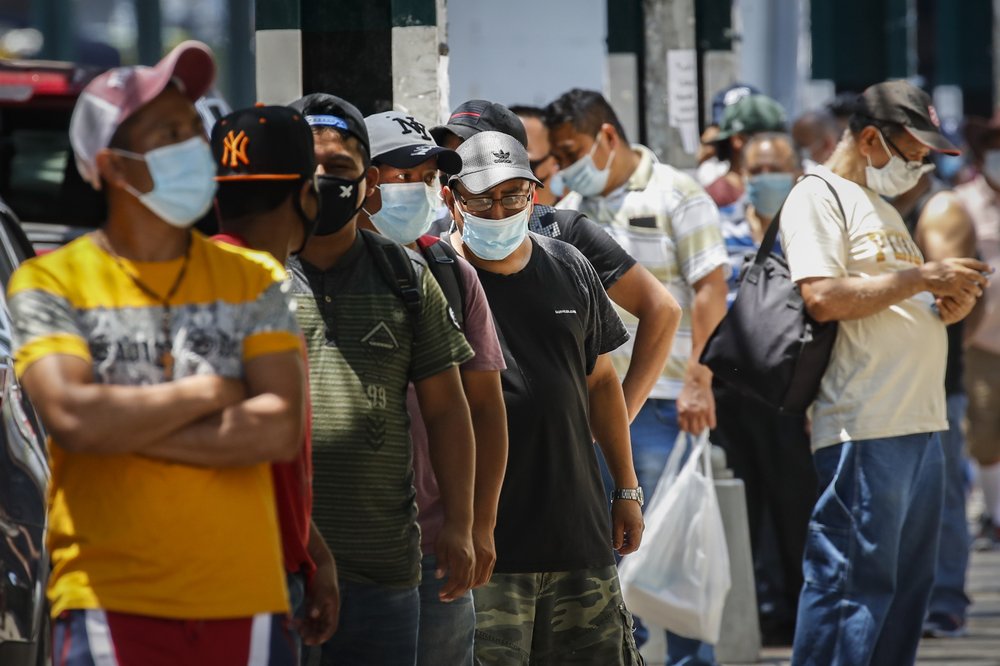 NEW YORK (AP) — Damiana Reyes is back at work at a busy Manhattan hair salon, making highlights, blowouts and extensions. But her mind often drifts to her father, with whom she lived in Queens, before he succumbed to the coronavirus at age 76.

“All my clients ask about him and then, when I return home, people ask me in the street where he is. It’s a constant reminder that he is not around anymore,” said Reyes, who thinks her father got sick while playing dominoes at a day care center for elders.

The pandemic has changed Reyes’ life and those of many in Corona, a Latino neighborhood in Queens that was among the hardest hit places in the world.

Even though tropical music emerges from recently reopened stores and some people sit outside at restaurants offering sidewalk dining, the lingering effects of COVID-19 are noticeable. Hunger and joblessness are rising. Survivors are still grieving lost loved ones.

Lines for free food stretch everyday for two blocks on 39th Avenue, filled mostly with Latino men who lost jobs in restaurant kitchens, in construction or doing domestic work when the city shut down in March.

Shutters are down on businesses that have closed permanently. Many people haven’t paid rent in weeks, said Pedro Rodríguez, executive director of La Jornada, a food pantry.

“We have gone from 20 to 30 new clients a week to thousands in the last three months,” said Rodríguez, whose pantry is based in Flushing but recently started to also deliver food once a week from the Queens Museum, in Corona, to serve between 700 and 1,000 families.

“The calls we have gotten over the last month, requesting food, come from Corona,” he said. “Before the pandemic, we used to see many elderly people. Now, we see young families in their 20s, in their 30s. It’s dramatic.”

City data shows that poor immigrants and Black New Yorkers were hit harder than wealthy, white sections of the city. Health officials have attributed that partly to the virus spreading easier in cramped apartments among laborers who can’t telecommute to work.

Corona has the city’s highest percentage of foreign born residents (60%) and North Corona sits in Queens Community District 3, which has the largest percentage of unauthorized immigrants in the city, according to census data. That’s why many here work informal jobs, don’t have health insurance and can’t apply for federal relief.

Every day, immigrants from Mexico, Ecuador, Guatemala and Colombia start lining up around noon to get food distributed by the nonprofit Alianza Ecuatoriana Internacional.

Eduardo Macancela, a 60-year-old Ecuadorean immigrant, is one of the first in line.

“I have sold everything I had, any jewelry, everything,” said Macancela, who worked at a Forrest Hills shoe store for more than 20 years. The store has shut down, leaving him without a job. He hasn’t paid rent in weeks but he says his landlord is starting to pressure him.

On a hot July day, families with strollers walked around in Corona, stopping in front of a taco or tamales truck. Stores displayed little statues of the Virgen de Guadalupe next to face masks and hand sanitizer. Others, called Botanicas, had signs promising effective love spells. And some, like the sign outside Ecuadorean restaurant Vasija de Barro, on Roosevelt Avenue, announced its permanent closure “due to the coronavirus.”

The unemployment rate for foreign-born Latinos has jumped from 4.4 percent in February to 13.5 percent in June, according to the Migration Policy Institute.

In New York, the city partnered with the Open Society Foundations to offer a total of $20 million in payments to immigrant workers regardless of their immigration status.

Non-profits distributed the funds. However, Assemblywoman Catalina Cruz, who represents Corona and the adjacent neighborhoods of Jackson Heights and Elmhurst, said the rollout was “horrific” and help arrived late.

Cruz said the pandemic exacerbated existing problems in Corona and that many residents had preexisting health conditions they couldn’t fully take care of due to lack of access to health care.

“This is a community that had already suffered years of neglect by government officials,” she said. “This is a community in which people depended on daily labor so if you don’t work you don’t eat and you don’t pay rent and often the rents had become so exorbitantly high that you had two, three families living in one very close-up space.”

New York Commissioner of the Mayor’s Office of Immigrant Affairs, Bitta Mostofi, called the $20 million in city help an important effort that gives “some measure of relief” to families who were left out of federal support. Still, Mostofi said the money is not enough: It helps over 20,000 families, but the city has more than 300,000 workers who are immigrants with no legal status.

“We really believed and continue to (believe) that the state and federal government needed to take much bigger and greater action to address this gap,” she said.

In the meantime, Reyes, the Dominican hair stylist, plans to pick up her father’s ashes soon. She’s thinking about moving to another neighborhood, she said.

Not only to be closer to work, but also to be somewhere that doesn’t remind her constantly of his death.

A troubling pandemic thought: Are THESE the good old days?