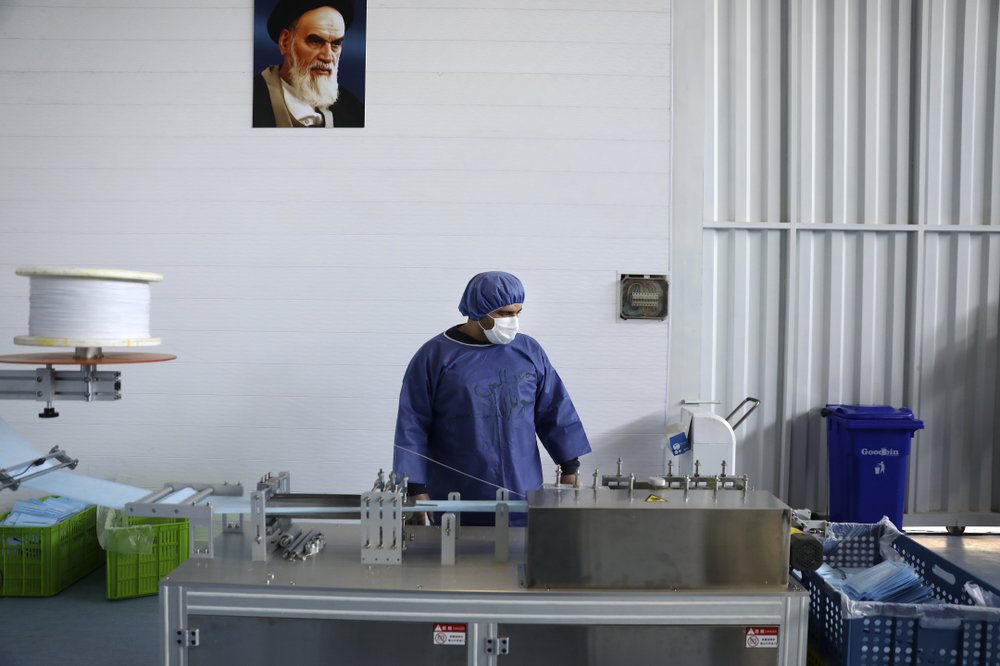 TEHRAN, Iran (AP) — The death toll in Iran from the coronavirus pandemic is likely nearly double the officially reported figures, due to undercounting and because not everyone with breathing problems has been tested for the virus, a parliament report said.

Iranian health officials offered no comment on the report, released Tuesday, which represents the highest-level charge yet from within the Islamic Republic’s government of its figures being questionable, something long suspected by international experts. Iran on Wednesday put the death toll at 4,777, out of 76,389 confirmed cases of the virus — still making it the Middle East’s worst outbreak by far.

The report comes as Iranian President Hassan Rouhani continues to push for a slow reopening of the country’s economy, which remains targeted by crushing US sanctions. If its own figures offered to the World Health Organization are wrong, it adds to fears by some that encouraging people to return to work will spark a second wave of infections.

“In order to have more compatibility between protocol and estimated statistics, it is necessary to increase laboratory and testing capabilities in the country,” the report said. “Needless to say that through increasing the capacities, diagnosis of disease will be more possible and spread of the disease will be more limited.”

The 46-page report by Iran’s parliament research center, published online, carries the weight of being written by nonpartisan experts within the country. Already, hard-liners have seized on Rouhani’s handling of the pandemic to criticize him and his administration, which is held in poor regard after his 2015 nuclear deal with world powers collapsed due to President Donald Trump’s move that unilaterally withdrew the US from the accord.

The explosive charge was merely a footnote on page six in what appeared to be an otherwise routine report.

It said Health Ministry death toll figures counted only those who died in hospitals and had gotten positive test results for the virus. That disregarded all coronavirus victims who died in their homes. The report also said that aggressive testing, something experts have seized upon as necessary in the pandemic, has not been done in Iran — meaning other cases likely have been missed. It suggested the true death toll in Iran is probably 80 percent higher than figures now given, or nearly double.

As far as the positive cases are involved, and given the undertesting, the number of people infected is probably “eight to 10 times” higher than the reported figures, the report said.

If correct, the report’s worst-case figures would put Iran’s death toll potential as high over 8,500, with some 760,000 total cases. That would catapult Iran to the country with the highest number of infections in the world.

The US has over 600,000 confirmed cases, according to figures from Johns Hopkins University, though experts believe that number likely is larger as well.

International experts long have suggested they suspected Iran’s numbers as its mortality was higher than other nations. While other countries also have seen cases spike, Iran’s reported numbers so far have offered a gradual slope.

The report also accused authorities of not providing its authors with “detailed figures” over the disease. It also warned that more than 30,000 people could die if strict quarantine measures aren’t taken.

Last week, lawmaker Reza Shiran from the northeastern holy city of Mashhad, said that there had “been no correct reporting on the death toll.” He alleged official reports instead labeled deaths as coming from an “acute respiratory syndrome.”

Deputy Health Minister Ali Reza Raisi on Wednesday acknowledged that the “limits of testing” faced by Iran means it doesn’t have accurate figures of all those infected.

“The real figures are more than the official statistics but it is not correct to multiply official figures by two or three,” he said, without elaborating or directly addressing the parliament report.

Meanwhile, Dubai’s long-haul carrier Emirates said Wednesday it has begun administering on-site rapid coronavirus tests for passengers, beginning with a flight to Tunisia. It described itself as the world’s first airline to conduct on-site rapid tests for passengers. Dubai health officials conducted the blood test, offering results in 10 minutes, according to the airline.

In Pakistan, officials said that the United Arab Emirates has released some 400 Pakistani prisoners convicted of minor crimes over the outbreak. A plane carrying 181 prisoners and eight Pakistani nationals stranded in Dubai landed in the northwestern city of Peshawar on Wednesday, immigration official Mohammad Zahid said.

The 181 were quarantined, Zahid said, adding that the remaining prisoners will also return home soon.

Image: Under a portrait of the late Iranian revolutionary founder Ayatollah Khomeini, a worker wearing a protective suit controls a machine which makes face masks at a factory in Eshtehard, some 70 miles (114 kilometers) west of the capital Tehran, Iran, Tuesday, April 14, 2020. The factory is producing protective masks round-the-clock in a fight against the new coronavirus to meet the domestic demand as the country faces the worst outbreak in the Middle East. (AP Photo/Vahid Salemi)

Virus becomes latest battle between Iran, US amid tensions