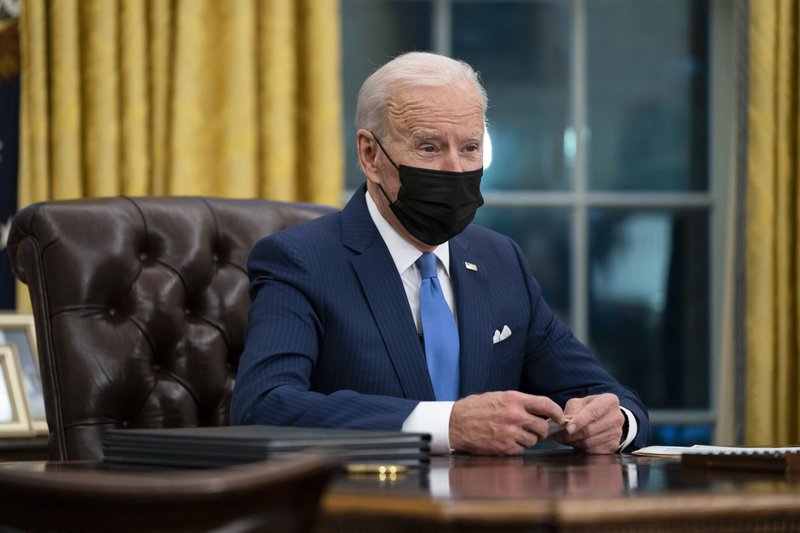 WASHINGTON (AP) — A new-old ritual is taking shape in the Biden White House, one that starts with bulky briefing packages, war-gaming the “what-ifs,” and Oval Office discussions about how to talk to this or that particular US ally or adversary.

Twelve times since he took office, President Joe Biden has dialed up a world leader after reinstituting what was a long-held White House standard mothballed by Donald Trump: vigorous preparation. Gone are unnecessary digressions and over-the-top cajoling or haranguing of fellow heads of state.

The changes to telephone diplomacy have been about both style and substance as Biden has sought to send the message to foreign leaders — many embittered by Trump’s habit of berating his counterparts and conflating personal interests with US national security — that Biden is determined to reset the US relationship with the world.

“They’ve come cued in to the idea that they need to manage alliances really well right off the bat,” said Matthew Goodman, who served on the White House National Security Council staff during the Barack Obama and George W. Bush administrations. “It’s a central organizing principle as they look to turn the page on Trump and get alliances back on track. The preparation for calls is part of that.”

Biden’s foreign policy will ultimately be judged on results more than form or preparation. But his approach so far is a marked change from Trump, who seemed to have better rapport with autocrats like Russia’s Vladimir Putin and North Korea’s Kim Jong Un than with many historic US allies. The former president frequently strayed far from telephone talking points and advice his aides provided for his dialogue with world leaders.

Leaked conversation transcripts showed that days into his administration, Trump disposed with diplomatic niceties and hectored Mexico’s President Enrique Peña Nieto against publicly saying that Mexico would never pay for a southern border wall, a signature call of the president’s 2016 campaign. Trump also complained to Australia’s Prime Minister Malcolm Turnbull that he was forcing Trump to endure the most “unpleasant call” and was “worse than I am” for detaining refugees on small islands off Australia.

Most notably, the Republican president’s 2019 call with Ukrainian President Volodymyr Zelenskiy led to Trump’s impeachment after it was revealed that Trump had asked him to “do us a favor” and investigate Biden and his son Hunter’s activity in the country.

As was the practice with past administrations, Biden advisers are typically preparing the president ahead of calls with a package of written background information, including summaries of recent developments in the country, a recap of previous interactions with the leader, talking points on issues to highlight, as well as “if asked” notes to help shape the president’s response to hot-button issues that his counterpart might raise.

Trump aides realized early on that the president had little patience for briefing material or talking points. At first, they offered him a six-page pre-brief with attachments ahead of calls, but that proved to be too long. So they did a one-page version. Trump later was given note cards that typically contained just three talking points.

“Sweating the details on every single word in a memo didn’t matter, because communicating the right message on behalf of the United States didn’t matter to the president,” said Frances Brown, who served as a senior adviser on the National Security Council in the Trump and Obama administrations. “For an NSC staffer, it invited a bit of an existential crisis.”

Last week, Biden dialed up China’s Xi Jinping for a two-hour conversation in which he raised concerns about human rights abuses and unfair trade practices. Earlier, in a call with Putin, Biden condemned the jailing of Russian opposition leader Alexei Navalny and pressed Putin on his nation’s involvement in a vast cyberespionage campaign in the US

Ahead of both calls, senior Biden administration officials previewed for reporters what the president planned to say, a step meant to help head off potential efforts by Beijing and Moscow to control public messaging about the conversations.

Biden’s first leader call as president went to Canada’s Justin Trudeau, the prime minister whom Trump once disparaged as “very dishonest and weak.”

For Biden, the chat with Trudeau was part tough conversation and part easy banter. Biden explained his decision to halt construction on the Keystone XL oil pipeline, a Canada-to-US project that Trudeau supports. Biden also reminisced about his late first wife’s family ties to Toronto and his own 2016 visit to Ottawa when Trudeau honored him with a state dinner.

The two leaders discussed the coronavirus pandemic, the economy and two Canadians imprisoned in China in apparent retaliation for Canada’s arrest of a top Huawei executive, according to Canadian officials.

One senior Canadian official familiar with the call said Biden appeared well prepared for the half-hour conversation and noted that it went longer than any call the prime minister had with Trump.

British Prime Minister Boris Johnson, who spent years flattering and courting Trump, said in an interview Sunday with CBS on “Face the Nation” that his conversation with Biden was “fantastic” and they had talked about issues like climate change, NATO, Iran and more.

The White House notably published an official photo of Biden meeting in the Oval Office with national security adviser Jake Sullivan and NSC senior director of European affairs Amanda Sloat as he prepared for his recent call with German Chancellor Angela Merkel.

James Carafano, a national security analyst at the conservative Heritage Foundation, said Biden with his first round of calls has been primarily concerned with sending the message that he’s turned the page on Trump. But Carafano argues that the new president has largely avoided detailing what that means in substance for US foreign policy.

“He hasn’t really gone beyond we’re going to work with friends and allies theme,” Carafano said.

Biden made clear his desire to return to diplomacy after Trump withdrew from the Obama-backed international nuclear deal with Iran.

Around the globe, considerable attention also is being paid to which countries haven’t made it onto Biden’s call list yet.

The new president has yet to speak with Turkey’s Recep Tayyip Erdogan, who had a close relationship with Trump even as the US and Turkey were at odds over a number of issues, including Syria policy and Turkey’s decision to purchase Russia’s advanced anti-aircraft missile systems. The latter prompted Washington to expel Turkey from its F-35 stealth fighter program.

Biden on the campaign trail called Erdogan an autocrat, and as vice president was forced to offer an official apology in 2014 after suggesting Turkey played a role in the rise of the Islamic State group.

Israel’s former ambassador to the United Nations, Danny Danon, on Wednesday tweeted a list of 10 countries that he said had received calls from Biden. “Might it now be time to call the leader of #Israel, the closest ally of the #US?” Danon posted.

White House press secretary Jen Psaki said nothing should be read into the lack of a call so far. “It is not an intentional diss,” she said, and promised that a call to Israeli Prime Minister Benjamin Netanyahu was coming.

Image: FILE – In this Feb. 2, 2021 file photo, President Joe Biden speaks in the Oval Office of the White House in Washington. A new-old ritual is taking shape in the Biden White House, one that starts with bulky briefing packages, war-gaming the “what-ifs,” and Oval Office discussions about how to talk to this or that particular US ally or adversary. Twelve times since he took office, President Joe Biden has dialed up a world leader after reinstituting what was a long-held White House standard mothballed by Donald Trump: vigorous preparation. (AP Photo/Evan Vucci)