Since 1952, the military has been the guarantor of both the nation and the state. Since February 2011, it has acted twice in that capacity — first by facilitating President Hosni Mubarak’s exit from power, and second by supporting President Mohamed Morsy’s August purge of the Supreme Council of the Armed Forces.

The key question now is: Might the military act a third time? Might key officers now perceive Morsy’s and the Muslim Brotherhood’s aggrandizement of power as threatening the stability and even viability of the state, and possibly the interests of the military as well?

The short answer is “maybe.”

Morsy is obviously preoccupied with this question, as indicated by his handling of the military before and after turning the tables on the SCAF in August. Sensing the military’s dissatisfaction with Tantawi and former Armed Forces Chief of Staff Sami Anan, he reached out to officers he thought would support his intended purge.

Key among them was General Abdel Fattah al-Sisi, whose suitability rested upon his background in military intelligence, his comparative youth and his sympathy for Islamism.

He had his fingers on the political pulse of the officer corps. As a 57-year-old, he was a full generation younger than Tantawi, but also sufficiently senior so as not to require the hasty retirements of hundreds of older officers.

Finally, and possibly most importantly, Sisi openly professed Islamist orientations, as suggested by some media accounts accusing him of being a Brotherhood mole inside the SCAF. Whether this allegation is true or not is unknown, but his open support for Islamist conceptions of government is a matter of public record.

His paper in 2006 for the US Army War College, for example, argues that the support of religious leaders is vital for political systems; that democracy cannot be understood without reference to the concept of Khilafa (Caliphate), baaya (allegiance) and shura (consultation). He argued also that since the legislative, executive and judicial bodies should all take Islamic beliefs into consideration, there is no fundamental need for a separation of powers. Clearly his political outlook is heavily influenced by Islamist conceptions and possibly directly by Brotherhood teachings.

Morsy cleverly exploited the raid on the checkpoint in Sinai on 5 August to discredit and remove the SCAF’s leaders.

Three days later, he struck at the key positions designed to protect the president. The core of those are the command of the well-equipped, 20,000-strong Republican Guard, which Morsy gave to General Hamid Zaki, and the head of military intelligence, who became General Abdel Wahid Shehata, replacing Tantawi loyalist Mourad Mowafy.

That Morsy would have direct control over anti-riot forces — vital if he was to be able to deter possible SCAF-instigated demonstrations — was signaled by his changes to commands of the military police, the Central Security Forces and the Cairo Security Directorate. Having secured the presidency against possible reactions from the military or the “street” orchestrated from the Defense Ministry, Morsy was now prepared to go after Tantawi.

Morsy pounced, removing Tantawi and his heir apparent, Anan, the latter of whom was replaced by the commander of the Third Army, as well as commanders of the Navy, Air Force and Air Defense. The newly appointed defense minister, Sisi, then retired the cadres of some 200 older officers, leaving him the undisputed senior figure in the military.

Since these dramatic events, Morsy has been extremely solicitous of the military’s interests. That there would be no retribution for the military’s behavior during and after the Mubarak era was demonstrated by awarding medals and posts to Tantawi and Anan, and by refusing to countenance independent investigations of the military’s treatment of demonstrators in Maspero, Mohamed Mahmoud and other incidents of extreme violence against protesters.

Preservation of the military’s interests into the future has been signaled by draft articles of the constitution, including those for the upgrading of the military-dominated National Security Council and the military courts. Not a word has been said about the military economy, implying that it, along with the military more generally, shall continue to be walled off from civilian oversight.

Given this favorable treatment by Morsy, the officer corps should have little cause for complaint. Moreover, Morsy’s adroit handling of the Gaza crisis whereby he brokered a truce that ended the fighting, coupled with expansion of Egyptian regional influence within the context of a resurgent Islamism, no doubt appeals to the nationalism, pride and professionalism of the corps, to say nothing of whatever Islamist sentiments are present within it.

But even if there were complaints, the military intelligence and the General Intelligence Services are now in friendly and presumably capable hands, in turn overseen by both Morsy and Sisi.

Yet one cannot assume the officers’ clubs are sites of unqualified joy with regard to the Morsy presidency. The ascendancy of the Brotherhood and its clear desire to entrench its rule at the expense of virtually all other civilian political groups has to be of concern to many officers, especially, of course, those who prefer democracy and/or secularism.

The threat to public order resultant from reactions against Morsy’s dictatorial decrees of 22 November, and the prospect that disorder will ultimately require severe repression if it is to be contained, must be of profound concern to the military as a whole. Any threat to national coherence is such, but one that causes the incumbent political leadership to become more heavily dependent upon security forces within the Interior Ministry poses a direct threat to the institutional interest of the military.

Indeed, it was partly this clash of institutional interests that caused Tantawi to move against the Mubarak regime. Continued unrest in the Sinai results in part from the tensions and conflicts between the military and the security forces, and that unrest in turn exacerbates those tensions.

Finally, Morsy’s dramatic gamble threatens the relationship with the US, hence the military’s source of external support.

In sum, Morsy and his colleagues in the Brotherhood are putting their newly established relationship with the military to a real test. Presumably, their assumption is that they can count on the loyalty of senior military personnel out of shared Islamist thinking, combined with solicitousness of the military’s institutional interests.

But this assumption could be incorrect. Four months may not be long enough for the new military leadership to have cohered into a like-minded group dedicated to the preservation of the Morsy government, to say nothing of establishing the networks of loyalty and control down into the army.

And while that government has demonstrated extreme sensitivity to the military’s institutional interests, its grab for power threatens the very nation and its unity that the military sees as its primary role in defending.

So, in the absence of reaching significant compromises with the political opposition, Morsy is going to put his relationship with the military to the supreme test. Whether his presumed confidence is justified or not may soon be decided. 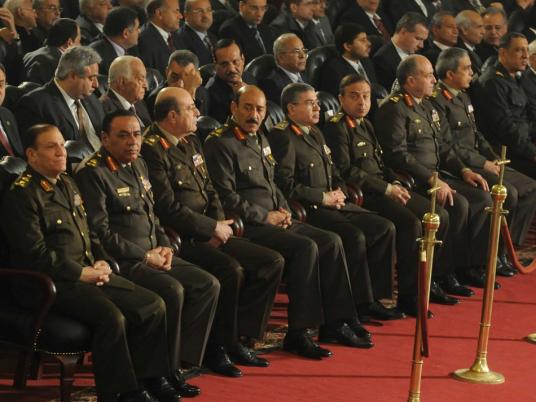 Is it a division or a revolution?