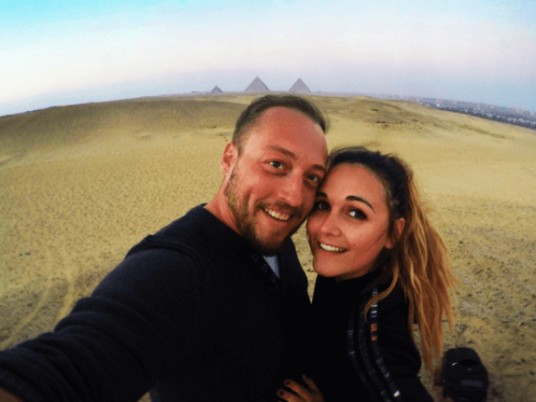 Visiting Cairo is no doubt on the top of many travelers' lists, but did you ever think it could be done in just two days?
Two travel bloggers, a American and French couple, shot a six-minute video about their weekend stay in Egypt during which they visited different touristic spots in Cairo and enjoyed the vibe and culture, saying that it was "just a taste" and they can't wait to return and visit Luxor and Karnak temple.
The couple, Jeff and Anne, have an official Facebook page and blog entitled “What Doesn’t Suck?” on which they post fun, informative videos and blogs about their travels to more than 75 countries.
The bloggers have already done similar 48-hour experiences in other countries including India, Iceland, Beirut, Nepal and Tajikistan. Jeff and Anne are currently living in Dubai but they have already lived in Chile, the US, Norway, France, India, Holland, South Africa and Thailand.
“I’ll go ahead and say it right now, Egypt is the most fascinating country on Earth,” said Jeff in the video.
The couple visited the Great Pyramids in Giza and the Sphinx; they were amazed by the pyramids and Egypt's heritage. They experienced the adventure of going inside the largest pyramid (Khufu) and the innermost chamber and they hiked up the ancient stone corridor into the center of the pyramid.
At sunset, they rode horses, wandering the marvelous desert behind the pyramids. Jeff could not find a more breathtaking place to document the moment and proposed to Anne. “We have done many adventurous things over the years, but getting engaged in the desert while looking at the pyramids is not one we will ever forget” he said.
The couple then moved on to the Kempinski hotel in downtown to experience the best view of Cairo at the rooftop bar Loft 21.

Moqattam neighborhood boasts a plateau with little light pollution and fantastic views. There, the couple tried shisha and special Egyptian tea whilst looking out at an unending view of Cairo and the Great Pyramids sticking out on the horizon. Their Egyptian guide surprised them with a cake to celebrate their engagement.
The couple then visited Memphis, the first capital city of Egypt. They were awed by the innumerable number of statues, carvings and artifacts at this discrete, out-of-the-way outdoor museum. “From the towering statues of Ramses II, to intricate hieroglyphics carved in stone there is something for everyone, and if it doesn’t fill your imagination with childlike wonder, you have no soul,” the blog added.
Their intense trip also included a visit to Sultan Hassan Mosque, a massive Mamluk era mosque located near the Citadel in Cairo, following which they went to al-Azhar University, an impressive site and known as the one of the oldest universities in the world where Islamic scholarship thrived.
Jeff and Anne dropped by Tahrir Square, the center point of Cairo and the home of the revolution, to the Egyptian museum to view the impressive collection of papyrus, the mummy of Queen Hatshepsut and many other mummified pharaohs. They also visited Saqqara step pyramid, the oldest known pyramid.

In the video, Jeff commented that Cairo is incredibly cheap. He expressed his sadness at seeing the ailing tourism industry in Egypt which is still suffering and has cost many Egyptians their livelihoods. According to the Central Agency for Public Mobilization and Statistics, Egypt lost more than half of its tourists in the first half of 2016 compared to the same period last year.
The video went viral on Facebook, receiving popular positive feedback and hundreds of shares. Other people who had also visited said that Egypt was a special place to visit
“Yay, one of my all time favorite countries! I've been a few times and am going back again. So glad you loved it, it really is a mind-blowing puzzle,” one of the fans of the Facebook page said.