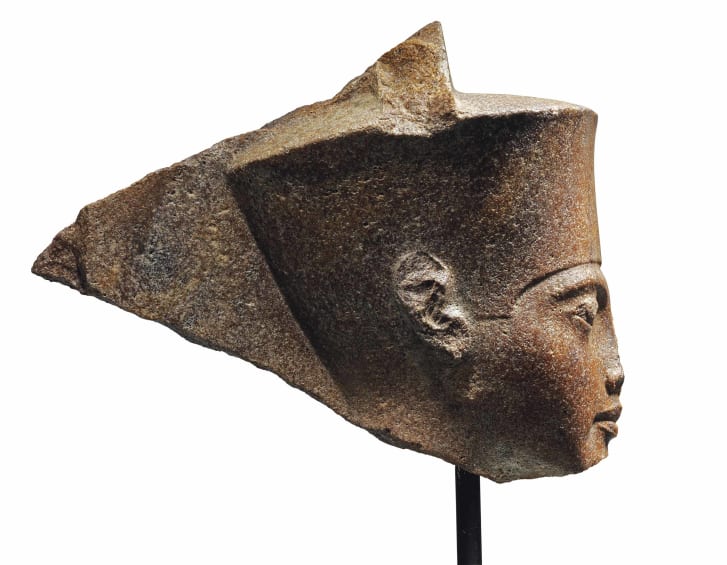 Egypt has said that it will file a civil lawsuit after the sale of an ancient statue at auction last week. The stone head, which resembles Pharaoh Tutankhamun, was sold for 4.7 million euros (US$5.97 million) at a London auction on July 4, despite protests from Cairo that the relic may have been stolen.

The National Committees for Retrieving Antiquities said on Monday that it would be “assigning a British law firm to take all necessary legal action to file a civil lawsuit” after the sale of the statue.

The committee also expressed “deep bewilderment that the British authorities failed to provide the support expected from it in this regard.”

The 11-inch statue was sold by Christie’s auction house, and the identity of the buyer has not been revealed.

A man has been arrested after $16,000 sculpture was taken from NYC gallery in broad daylight

The sale of the artifact has been highly controversial, with Egyptian authorities demanding the auction be canceled and calling for the relic’s repatriation.

Zahi Hawass, Egypt’s former Minister of State for Antiquities Affairs, told CNN he believed the piece left Egypt “illegally.” On the day of the sale, Hawass said that he believed the statue was taken from Egypt’s Karnak temple after 1970.

In a press release for the auction, Christie’s said the statue was acquired from Munich-based dealer Heinz Herzer in 1985, and was previously owned by Joseph Messina and Prinz Wilhelm von Thurn und Taxis.

Christie’s moved to assuage worries over the ownership of the statue, stating that “while ancient objects by their nature cannot be traced over millennia, Christie’s has clearly carried out extensive due diligence verifying the provenance and legal title of this object.”

“Christie’s would not and do not sell any work where there isn’t clear title of ownership and a thorough understanding of modern provenance,” the auction house added in a statement to CNN.

A spokesperson for Christie’s told CNN that the auction house had not been notified of any alternative claim.

“This piece has to be in a museum, not to be in a dark room of a rich man,” Hawass added.
In June, Egypt’s Ministry of Antiquities appealed to Christie’s and UNESCO to halt the sale, and asked to see documents proving the item’s provenance, according to a statement from the ministry.

Officials from the Egyptian embassy in London asked the UK Foreign Office to return the statue.

“Once again, we will not be negligent or allow anybody to sell any Egyptian artifact whatsoever,” a statement from Egypt’s Ministry of Antiquities released in June read.

On July 3, the embassy said in a statement that it “regrets” the decision to go ahead with the auction. According to Christie’s, the statue is “a remarkable representation of the young king” Tutankhamun.

After becoming pharaoh at the age of 9, Tutankhamun reigned until his death at 19, from around 1333 BC until around 1323 BC. His tomb, in the Valley of Kings across the Nile River from Luxor, is famous for having been discovered relatively intact, containing thousands of impressive relics and artifacts.

Image: The statue is said to have features reminiscent of Pharaoh Tutankhamun. Credit: Christies

Egypt asks to prevent departure of Tutankhamun bust from UK