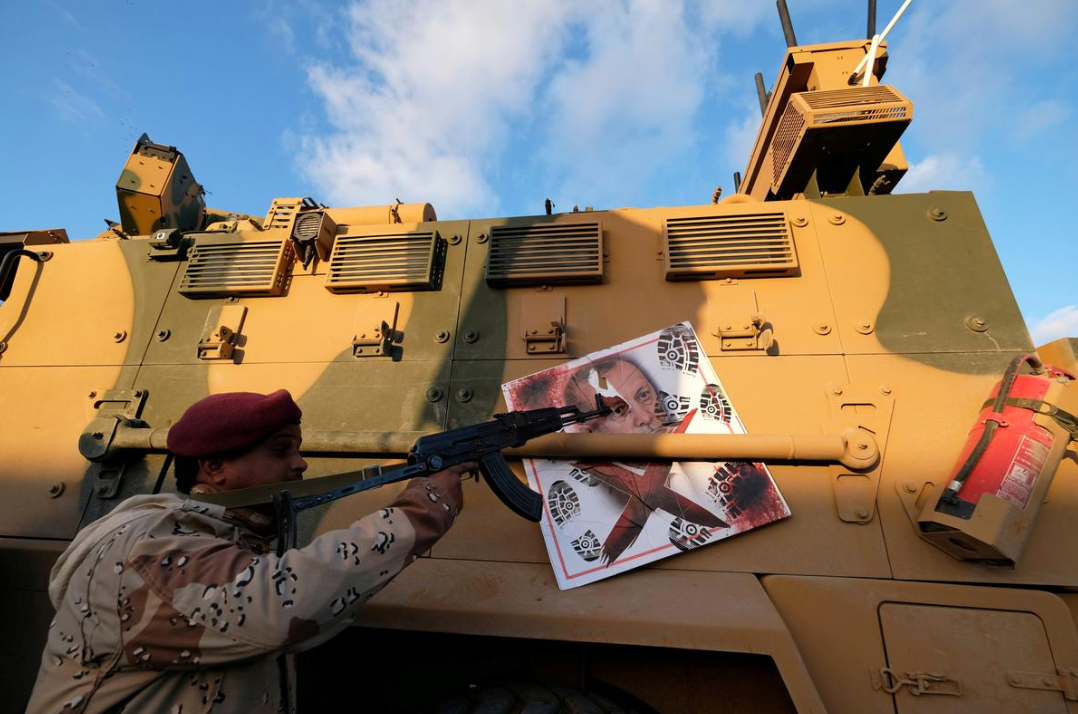 CAIRO (AP) — A US report said the presence of thousands of Syrian mercenaries sent by Turkey to Libya to fight on the side of the UN-supported government was likely to degrade security and generate backlash from the Libyan public.

The US Defense Department’s inspector general also said in a new report that it was concerned about the growing presence of Russian mercenaries fighting for the rivals of the Tripoli-based government in the Libyan war.

The report, which was released Tuesday, said Turkey has sent to Libya at least 5,000 Syrian mercenaries who previously worked closely with Ankara in Syria’s civil war. They were sent to help Tripoli-allied militias fight the forces of east-based military commander Khalifa Hifter.

While the Syrian mercenaries have bolstered the UN-supported government’s position, “their continued presence will continue to negatively affect the overall security situation in Libya,” said the report, which covers the second quarter of 2020.

Libya was plunged into chaos when a NATO-backed uprising in 2011 toppled longtime dictator Moammar Gadhafi, who was later killed. The country has since split between rival east- and west-based administrations, each backed by armed groups and foreign governments.

Haftar’s forces launched an offensive in April 2019 trying to capture Tripoli. But his campaign collapsed in June when the Tripoli-allied militias, with heavy Turkish support, gained the upper hand, driving his forces from the outskirts of the city and other western towns.

Fighting has died down in recent weeks, but both sides were preparing for a possible battle over the strategic city of Sirte, the gateway to Libya’s major oil fields and export terminals, controlled by Haftar.

The chaos has worsened in recent months as foreign backers increasingly intervene, despite pledges to the contrary at a high-profile peace summit in Berlin earlier this year. Thousands of mercenaries including Russians, Syrians and Sudanese are fighting on both sides of the conflict.

The U.S. Africa Command, or AFRICOM, described the Syrian mercenaries fighting with the Tripoli-based government as “inexperienced, uneducated, and motivated by promises of considerable salary.” It said Turkish private military company Sadat has overseen supervision and payment to the mercenaries.

Increasing reports of theft, sexual assault and misconduct by Syrian mercenaries in western areas are likely to further degrade the security situation and generate backlash from the Libyan public, AFRICOM said.

The report says extremists with previous militant links have been involved in the Tripoli fighting, although “it is possible they were fighting for financial and personal reasons rather than ideological reasons.”

Protests took place over deteriorating economic conditions last month in the capital and elsewhere in western Libya, which is controlled by forces loyal to the U.N.-supported government. Tripoli militias opened fire on demonstrators with rifles and truck-mounted guns and abducted some of the protesters.

The US military has grown increasingly concerned about Russia’s growing influence in Libya, where at least 3,000 Russian mercenaries and 2,000 Russia-sponsored Syrian mercenaries backing Haftar’s army, the report said.

A private Kremlin-linked military company known as the Wagner Group has since its initial deployment to Libya in 2019, provided trained snipers armed drones, resulting in “significant casualties” to Tripoli-allied militias, the report said.

In May, the US military accused Russia of sending at least 14 warplanes to a central Libyan airbase, claiming they were repainted in Syria to hide their Russian origin.

Moscow dismissed the US military’s accusations, insisting “the Russian military is not involved in any processes in Libya in any way.”

“Analysts have noted that the conflict in Libya has devolved into a proxy war, or ‘the new Syria,’ with Russia, Turkey, the United Arab Emirates, and Egypt competing for access and influence,” the report said.

Haftar is supported by Egypt, the UAE and Russia. Tripoli-allied militias have backing from Turkey, a bitter rival of Egypt and the UAE in a broader regional struggle, as well as from the wealthy Gulf state of Qatar.