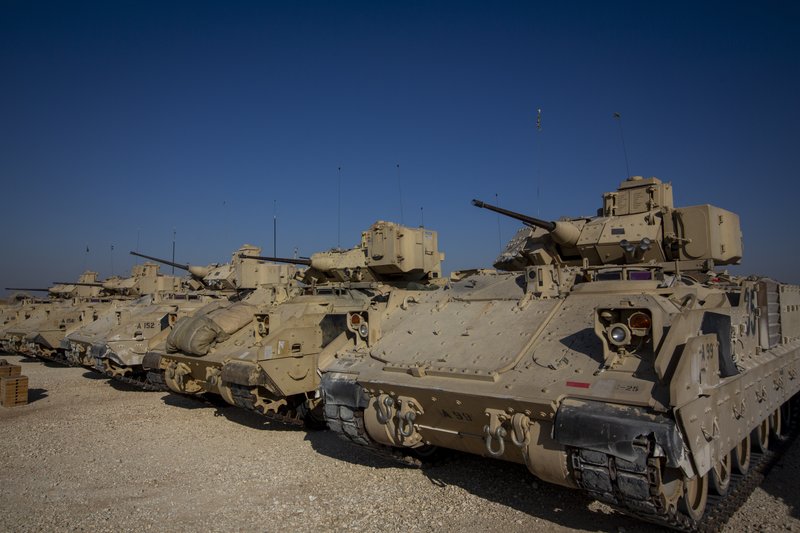 WASHINGTON (AP) — The US has deployed additional troops and armored vehicles into eastern Syria after a number of clashes with Russian forces, including a recent vehicle collision that injured four American service members.

Navy Capt. Bill Urban, spokesman for US Central Command, said the US has also sent in radar systems and increased fighter jet patrols over the region to better protect American and coalition forces.

“The United States does not seek conflict with any other nation in Syria, but will defend Coalition forces if necessary,” said Urban.

A senior US official said a half-dozen Bradley fighting vehicles and fewer than 100 additional troops were sent in to eastern Syria. The official, who spoke on condition of anonymity to discuss details of the military move, said the reinforcements are meant to be a clear signal to Russia to avoid any more unsafe and provocative actions against the US and its allies there.

There have been a number of escalating incidents this year between US and Russian forces who patrol in eastern Syria. The most serious was last month, when officials said Russian vehicles sideswiped an light-armored US military vehicle, injuring four Americans. A US official said at the time that two Russian helicopters also flew above the Americans, and one of the aircraft was within about 70 feet (20 meters) of the vehicle.

The deployment of the armored vehicles was first reported by NBC News.

Russia, which backs the Syrian government, has long opposed American presence in the country. The Russian Defense Ministry blamed the US for the vehicle collision. The ministry said Russia had notified the US-led coalition about the Russian military police convoy’s route and said the U.S tried to block the Russian patrol.

Gen. Frank McKenzie, head of US Central Command, said, however, that the Russian troops “were in an area they were not supposed to be. They were not in an area that they had received permission to go to. And their actions were frankly reckless at the tactical level.”

In recent remarks to a small group of reporters, he said that while the US has a “pretty effective de-confliction channel with the Russians, they did not do any coordination with us” on that patrol. He added that the US would “take whatever measures are necessary to ensure that when we’re out there patrolling our men and women are going to be safe and they’re going to be able to do the task that they were sent there to do.”

The four American service members injured in the crash received concussions. US troops are usually accompanied by members of the US-backed Syrian Democratic Forces on the patrols, and they have stayed in the region to root out remaining Islamic State insurgents.

The crash last month took place near Dayrick, in northeast Syria, where Russian troops should generally not be present. National Security Council spokesman John Ullyot said the US patrol left the area “to deescalate the situation.”

While there have been several other recent incidents between the American and Russian troops in eastern Syria, officials have described the August crash as the most concerning.

This is the second time that Bradleys have been sent into Syria. They were used last October in operations with US-backed Syrian Democratic Forces in missions to defeat the remnants of the Islamic State group and protect oil fields in that area.

The Bradley units are from the 2nd Brigade Combat Team, 1st Armored Division, based at Fort Bliss, Texas.

“The mechanized infantry assets will help ensure the force protection of coalition forces in an increasingly complex operating environment in northeast Syria,” said Col. Wayne Marotto, spokesman for the US-led coalition. “The Coalition forces remain steadfast in our commitment of ensuring the enduring defeat of Daesh.”

Image: FILE – In this Nov. 11, 2019, file photo, Bradley fighting vehicles are parked at a US military base at an undisclosed location in Northeastern Syria, Monday, Nov. 11, 2019. The US has deployed additional troops and armored vehicles into eastern Syria after a number of clashes with Russian forces, including a recent vehicle collision that injured four American service members. (AP Photo/Darko Bandic, File)

Tags Russia syria US US Troops