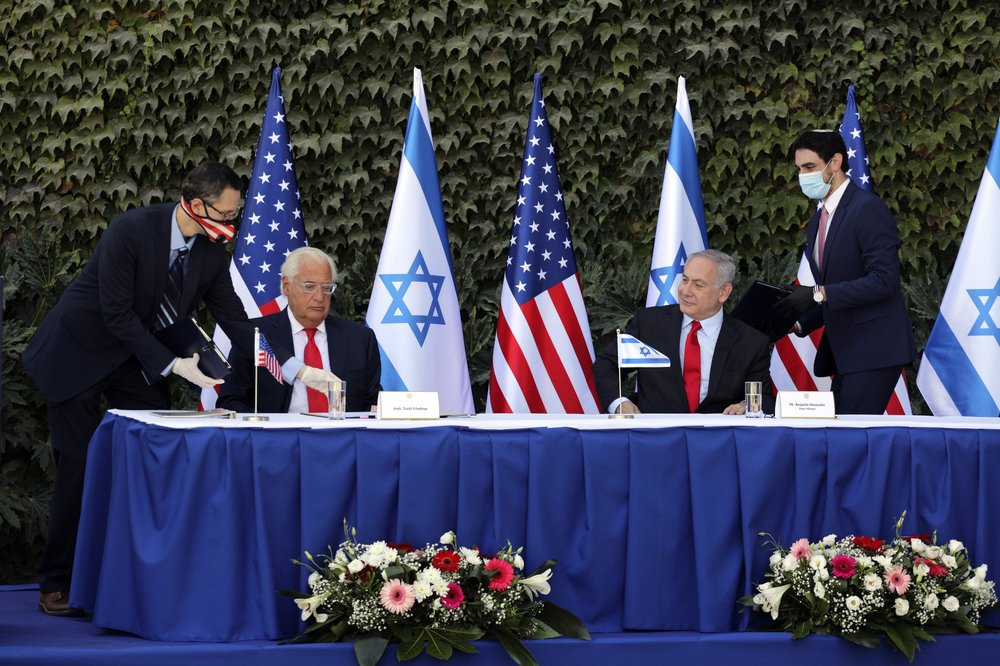 JERUSALEM (AP) — The United States and Israel amended a series of scientific cooperation agreements on Wednesday to include Israeli institutions in the West Bank, a step that further blurs the status of settlements widely considered illegal under international law.

Until now, three US-Israeli science cooperation agreements excluded projects in areas captured by Israel in the 1967 Mideast war — including the West Bank, east Jerusalem and the Golan Heights.

Israel captured the West Bank and east Jerusalem in the 1967 Mideast war, and in the decades since have built dozens of settlements that are now home to some 500,000 Israelis. The Palestinians seek the West Bank and east Jerusalem as part of a future independent state. Most of the international community considers Israeli settlements illegal under international law and supports the establishment of a Palestinian state based on the 1967 boundaries.

Breaking with decades of American policy, the Trump administration recognized Jerusalem as Israel’s capital and moved the US Embassy there. It also recognized Israeli sovereignty in the Golan Heights, which was captured from Syria in the 1967 war. In another reversal, the administration also said the US does not consider settlements illegal.

In a statement, the US Embassy in Israel said that “these geographic restrictions are no longer consistent with US policy,” and that updating the agreements to remove them “further strengthens the special bilateral relationship” between the two countries.

“This geographic restriction within the three agreements was an anachronism, it had no place within our evolving region,” US Ambassador to Israel David Friedman said at a ceremony at Ariel University.

Israeli Prime Minister Benjamin Netanyahu, a strong proponent of the settlements, thanked Friedman for his efforts “to right past wrongs.”

In the West Bank, the Palestinian Authority condemned the step as a “dangerous precedent.”

“This step is an actual American participation in the occupation of Palestinian lands,” said Nabil Abu Rdeneh, spokesman for President Mahmoud Abbas.

Eugene Kontorovich, director of international law at the Kohelet Policy Forum, a conservative Jerusalem think tank, said the decision would have long-lasting repercussions.

“This historic international agreement cements US policy that Israeli settlements are not illegal, and puts money behind it,” he said.

Palestinians push for international conference, US is open