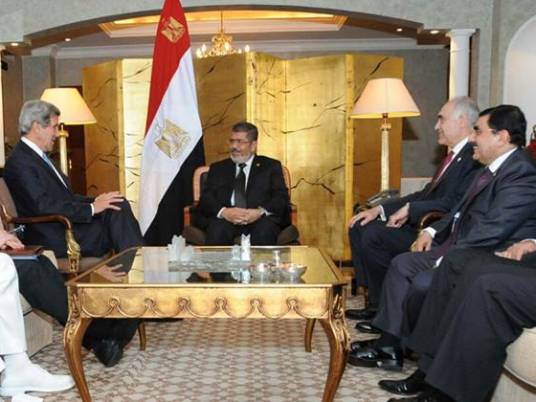 Presidential spokesperson Ehab Fahmy refused to comment on news circulating that, during their meeting on Saturday, US Secretary of State John Kerry called on President Mohamed Morsy to swiftly carry out economic reforms in order to secure a loan from the IMF and obtain more support from the US Congress.

"I will not comment on that," Fahmy told Al-Masry Al-Youm. Fahmy also refused to either confirm or deny whether the subject of the IMF loan and US aid to Egypt were broached during the meeting.

Morsy received Kerry in the Ethiopian capital Addis Ababa, on the sidelines of the African Union's Golden Jubilee celebration.

On Saturday, Reuters reported that Kerry urged Egypt to move quickly on economic reforms in order to secure a $4.8 billion loan from the International Monetary Fund, informing the president that such measures were necessary to convince the US Congress to provide further aid.

Kerry met Morsy for about an hour on the sidelines of an African Union summit on Saturday, discussing the war in Syria, the Israeli-Palestinian conflict, human rights in Egypt, and the country's faltering economy, the official said.

A deal with the IMF, however, could help placate investor and donor concerns after two years of political instability following the overthrow of former president Hosni Mubarak in early 2011. The instability has withered the tourism industry, a crucial sector of Egypt’s economy.

Kerry argued that the reforms were necessary to persuade American lawmakers to proceed with further economic support for the country, which borders US ally Israel, a US official told Reuters.

"He urged swift action on implementing the reforms required by the IMF, the official said. On March 3, during his first visit to Cairo as secretary of state, Kerry told Morsy that the United States would provide the first $190 million of $450 million pledged aid in recognition of Morsy's commitment to see the IMF process through.

Whether or not to send the remainder, however, would depend on the implementation of economic reforms, a point Kerry repeated in the Ethiopian capital.

"[Kerry] told Morsy that [the Department of State] needs to be able to demonstrate to Congress that Egypt has made the necessary reforms," the official said. Kerry added, "I have been a strong advocate of support for Egypt. I continue to support giving aid to Egypt, but … we need to see reforms in place that will encourage my former colleagues back at home to act." Kerry served in the US Senate for nearly 30 years before becoming the country's top diplomat on February 1.

Egypt has received about $1.3 billion in military aid from Washington dating back to the signing of the peace treaty with Israel more than 30 years ago. That support, however, was not believed to be contingent on economic reform.