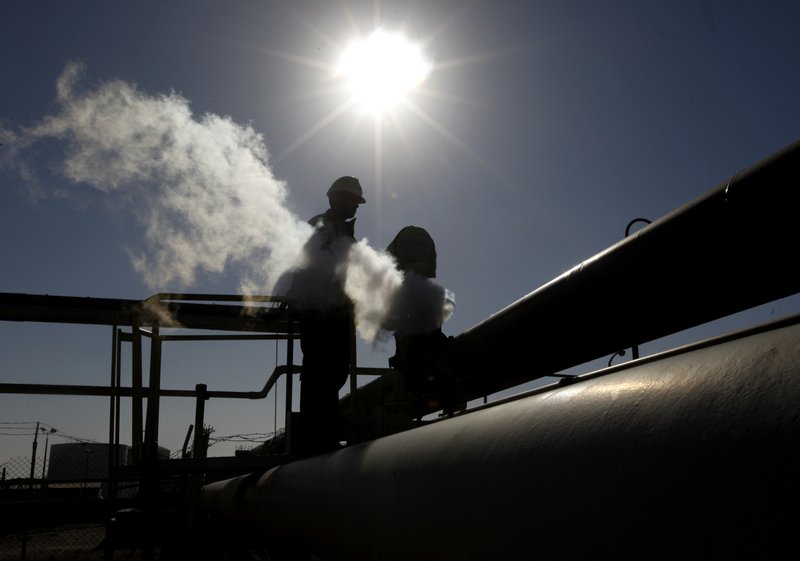 CAIRO (AP) — The United Nations announced on Monday that Libyan officials are allowing a long-sought external audit of the country’s Central Bank to go ahead, a breakthrough that could pave the way for an end to a crippling oil blockade.

Libya’s oil and money are strategic assets that have fueled conflict between the country’s rival administrations and militias since the 2011 NATO-backed uprising that ousted and killed longtime autocrat Moammar Gadhafi.

Libya sits on the largest proven oil reserves in Africa. The standoff over petrodollars reveals the extent to which Libya’s riches have always been the real stakes of the country’s deep-seated civil strife.

In recent years the country has become split between the UN-supported government in Tripoli, the capital, and an east-based administration loyal to military commander Khalifa Hifter.

The audit approval follows months of international pressure. Earlier in July, the US Embassy in Libya denounced “the illegal obstruction of the long-overdue audit,” and threatened sanctions against “those who undermine Libya’s economy.”

The Central Bank of Libya is the repository for billions of dollars annually in oil revenue as well as foreign reserves. In 2014, the bank splintered along the country’s broader political fault lines. The internationally recognized headquarters remains in Tripoli while a Hifter-allied eastern branch was set up in Benghazi.

The UN Mission in Libya welcomed the international financial review as a “critical step” toward improving transparency and accountability in Libya’s financial system.

London-based accounting firm Deloitte will conduct the audit of both banks, it said.

Ramzy Agha, a senior official in the east-based Central Bank, confirmed that preparations for the audit had been completed and said he expects the review to begin next week.

“We are ready and have been ready to participate openly in this review,” said Agha.

Officials in the Tripoli-based Central Bank did not respond to requests for comment.

The UN statement did not describe the hurdles that stalled the audit process since bank governors agreed on its terms in the fall of 2018. But Libyan officials have repeatedly accused Tripoli-based Central Bank Governor Sadiq al-Kabir of obstruction and requested that he resign.

In a statement earlier this month, the eastern branch said obstacles posed by the Tripoli-based bank prompted the state prosecutor to intervene to push the audit forward.

The Tripoli-based bank has denied the allegations, saying that it “confirms its readiness for an audit that it has requested since 2016.”

Tensions over Libya’s wealth escalated earlier this year when tribes loyal to Hifter in the oil-rich eastern region choked off major pipelines and terminals, accusing the bank of diverting oil revenues to provide salaries and supplies for Turkish-backed mercenaries fending off Hifter’s campaign to capture the capital.

The six-month oil blockade has deprived the Tripoli-based National Oil Corporation of nearly US$7.5 billion in revenue and put the UN-supported government under enormous financial strain.

Earlier this month, Hifter’s forces set conditions for lifting the blockade, asking for an international audit to probe the Central Bank’s spending over the last few years and crack down on alleged corruption in the oil sector. They also demand an independent mechanism to fairly distribute revenues to the long-neglected east.

The standoff over Libya’s oil revenues has raised fears of a new escalation in the chaotic proxy war, as rival sides mobilize for a battle over the strategic coastal city of Sirte, the gateway to the country’s major oil export-terminals under Hifter’s control.

Turkey, the main patron of the UN-supported government, wants Tripoli-based forces to advance on Sirte and gain access to the blockaded oil fields. Egypt, which backs Hifter along with Russia and the United Arab Emirates, has threatened to deploy troops to neighboring Libya if Turkish-backed forces attack, risking a direct clash with the NATO member.

On Monday, Joshua Harris, the deputy chief of mission at the US Embassy in Libya, met with officials in the western city of Misrata about how to prevent the offensive on Sirte, reopen the country’s oil sector and demobilize militias, according to an embassy statement.

Image: In this Feb. 26, 2011 file photo, a Libyan oil worker, works at a refinery inside the Brega oil complex, in Brega, eastern Libya. On Saturday, Jan. 18, 2020, the National Oil Corporation in Libya says that a decision by east-based forces to choke off oil exports from its territory has threatened to throttle much of the country’s oil production. Powerful tribal groups loyal to Gen. Khalifa Hifter, whose forces control much of eastern Libya, seized several large export terminals along the eastern coast as well as southern oil fields in a challenge to the rival UN-backed government based in Tripoli, which collects revenues from oil production. The move has ratcheted up tensions ahead of an international peace summit to end the civil war. (AP Photo/Hussein Malla, File)

Sisi and Trump agree to secure cease-fire in Libya