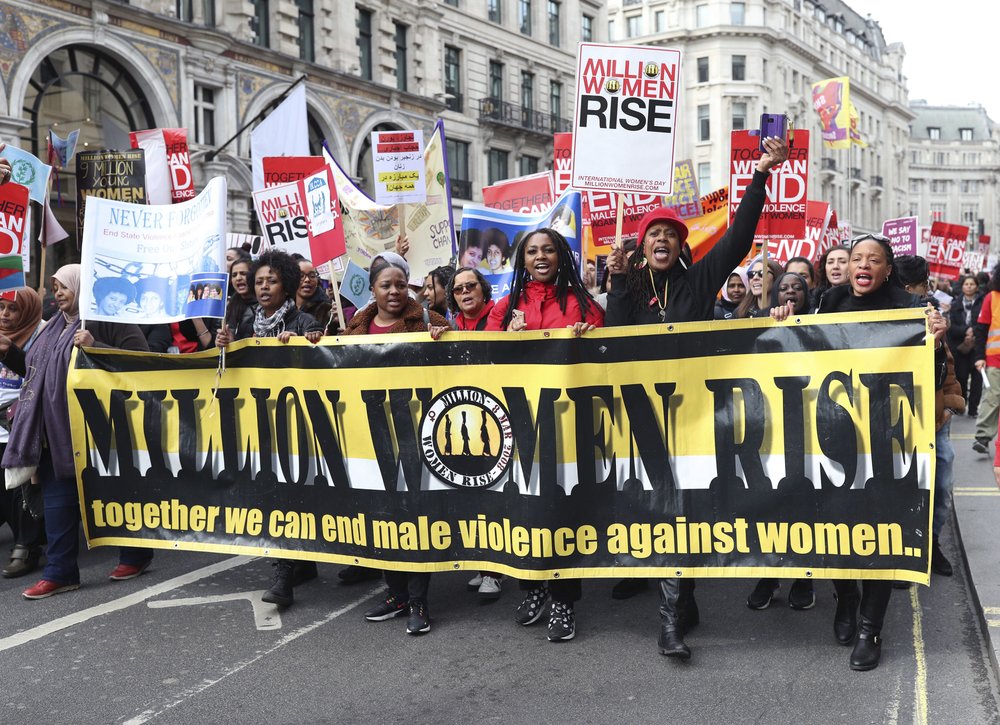 UNITED NATIONS (AP) — Calling himself “a proud feminist,” UN Secretary-General Antonio Guterres lashed out at men who abuse power and declared before Sunday’s observances of International Women’s Day that the fight for gender equality is “the biggest human rights challenge we face.”

Twenty-five years after 189 countries adopted a 150-page road map for achieving equality for women, a new report by UN Women says the reality is that millions of women still face poverty, discrimination and violence. It notes over 70 percent of lawmakers and parliamentarians and managers are men and nearly 500,000 women and girls over the age of 15 are illiterate.

The UN Development Program’s new Gender Social Norms Index also had some bad news for women. It found that close to 90 percent of both men and women hold some sort of bias against women.

According to the index, about half the world’s men and women believe men make better political leaders and over 40 percent think men make better business executives and have greater rights to a job. Further, 28 percent feel it is justified for a husband to beat his wife.

Guterres told the UN’s International Women’s Day observance Friday that “gender inequality is the overwhelming injustice of our day.”

“Deep-rooted patriarchy and misogyny have created a yawning gender power gap in our economies, our political systems, our corporations, our societies and our culture,” he said. “Women are still very frequently denied a voice; their opinions are ignored and their experience discounted.”

The secretary-general cited examples in recent months, including high-profile peace agreements being signed with no women at the table and emergency health care meetings on the new coronavirus held with few or no women participating.

International Women’s Day is taking place a day before the UN Commission on the Status of Women holds a drastically scaled down one-day event so delegations in New York can adopt a draft political declaration commemorating the 25th anniversary of the 1995 UN conference in Beijing that adopted the wide-ranging plan to achieve gender equality.

The commission had been expecting up to 12,000 people from its 193 member nations to be at its annual meeting. But it decided to postpone the major event until a later date because of the spread of the COVID-19 virus.

The Beijing platform called for bold action in 12 areas for women and girls, including combating poverty and violence, ensuring all girls get an education, and having women at the top levels of business and government as well as at the table in peace negotiations.

It also said for the first time in a UN document that women’s human rights include the right to control and decide “on matters relating to their sexuality, including their sexual and reproductive health, free of discrimination, coercion and violence.”

The draft declaration expected to be adopted Monday reaffirms the Beijing platform for action and expresses concern “that overall, progress has not been fast or deep enough.” It pledges to take “concrete action to ensure the full, effective and accelerated implementation” of the road map.

Olof Skoog, the European Union’s top diplomat at the UN, said the EU wasn’t happy with the initial draft but “we played hardball, I think it’s fair to say,” to produce “the most detailed and action-oriented political declaration ever adopted” by the commission.

He said there are advances in some areas and the declaration avoids “backtracking on some of the issues where there was huge push back.”

Among those issues was the definition of the family, with traditionalists insisting on a mother, father and children and progressive countries wanting to include LGBT families as well, he said. Another was on how to mention sexual and reproductive health and rights for women.

In the end, Skoog said, direct references to both issues were dropped in the declaration. But since the declaration affirms the Beijing platform, what that document says about the family and women’s rights and health will stand.

Francoise Girard, president of the International Women’s Health Coalition, said it was critical that governments recommit fully to the Beijing platform and called it heartening that they did so. She said governments also recommitted to achieving UN goals for 2030 that include sexual and reproductive rights for women, “so we feel that that is an extremely positive sign.”

What could really change the trajectory to achieve gender equality, Girard said, is ensuring that young girls can control their bodies, and there is still a long way to go.

“Controlling your body — sexual and reproduction and free of violence — is critical to everything else,” she told The Associated Press. “It’s critical to education, to employment, to political participation, to sitting on boards of companies. All these things won’t happen unless you control your body.”

On Friday, Guterres urged young women to keep up activism, and “please hold the world to account.”

“Twenty-five years after the Beijing conference, progress on women’s rights has stalled and even reversed,” he said. “We must push back against the push back. … It is more important than ever for men to stand up for women’s rights and gender equality.”

Image: Women take part in the Million Women Rise march, to demand an end to male violence against women and girls in all its forms, a day ahead of International Women’s Day, in central London, Saturday March 7, 2020. (Yui Mok/PA via AP)

No country for young women? Myanmar's battle against rape