(CNN)Nazanin Zaghari-Ratcliffe, the British-Iranian aid worker who has been held in Iran for almost six years, has arrived back in the United Kingdom after being released from detention.

Early Thursday, British Foreign Secretary Liz Truss said in a tweet that Zaghari-Ratcliffe and fellow British Iranian national Anoosheh Ashoori “have landed safely in the UK and are reunited with their families and loved ones.”
“Welcome home,” she said.
Emotional photos posted on social media by Truss, Amnesty International UK and the FreeNazanin campaign group which pushed for her release, show Zaghari-Ratcliffe hugging her daughter Gabriella and husband Richard Ratcliffe upon her arrival at the RAF Brize Norton airbase in Oxfordshire.
Images also show Ashoori being reunited with his family.
The former prisoners were flown from Iran on a Royal Air Force plane, which landed in the UK just after 1:00 a.m local time.
Their release was hailed by UK Prime Minister Boris Johnson as “huge achievements” for British diplomacy. “I pay tribute to the tireless efforts of those who have worked for six years to make today’s events possible,” Johnson wrote in a tweet.
Zaghari-Ratcliffe’s local UK Member of Parliament Tulip Siddiq tweeted a photo of her on board a plane Wednesday as she made her way home.
“It’s been 6 long years — and I can’t believe I can FINALLY share this photo,” wrote Siddiq. “Nazanin is now in the air flying away from 6 years of hell in Iran.”
Ashoori’s family said in a statement on Twitter, “1673 days ago our family’s foundations were rocked when our father and husband was unjustly detained and taken away from us. Now, we can look forward to rebuilding those same foundations with our cornerstone back in place.”
Ashoori was held in Iran for five years after he was arrested by Iranian intelligence agents in Tehran in 2017. He was convicted of spying for Israel’s Mossad intelligence agency and sentenced to prison for 12 years, Iran state news agency IRNA reported.

Zaghari-Ratcliffe and Ashoori’s return home came as Truss announced the UK had settled a decades-old £400 million ($524 million) debt owed to Iran, which Iran’s Foreign Minister Hossein Amir-Abdollahian denied was linked to the prisoner release.
“After highly complex and exhaustive negotiations, the more than 40-year-old debt between the International Military Services and the Ministry of Defense of Iran has now been settled,” Truss said in statement to Parliament.
The debt is for undelivered armored vehicles and tanks, originally ordered by Iran but canceled by the UK in response to the Iranian revolution of 1979, according to a research briefing published by the House of Commons Library.
Iran’s state-run Press TV said that Zaghari-Ratcliffe had been handed over to the UK government, without providing any further details. The country’s semi-official Fars news agency said she was being transferred to Tehran’s international airport, Imam Khomenei, with a British negotiating team.
Mayor of London Sadiq Khan said he was “delighted” that Zaghari-Ratcliffe had been freed from “wrongful imprisonment” in a statement Wednesday.

‘Start being a normal family again’

Zaghari-Ratcliffe’s husband Richard said the release of his wife means they can “start being a normal family again.”
Before her arrival back in the UK, Ratcliffe told reporters she got picked up by the Iranian Revolutionary Guard at 11:00 a.m. local time (3:30 a.m ET) and although she “wasn’t really allowed to speak” he was aware of her movements.
“Her homecoming is a journey not an arrival. There will be a whole process and hopefully we will look back in years to come and we will be a normal family,” Ratcliffe continued.
Zaghari-Ratcliffe was first detained at a Tehran airport in April 2016 following a vacation to see her family with her daughter.
She was accused of working with organizations allegedly attempting to overthrow the Iranian regime and was later convicted and sentenced to five years in jail. 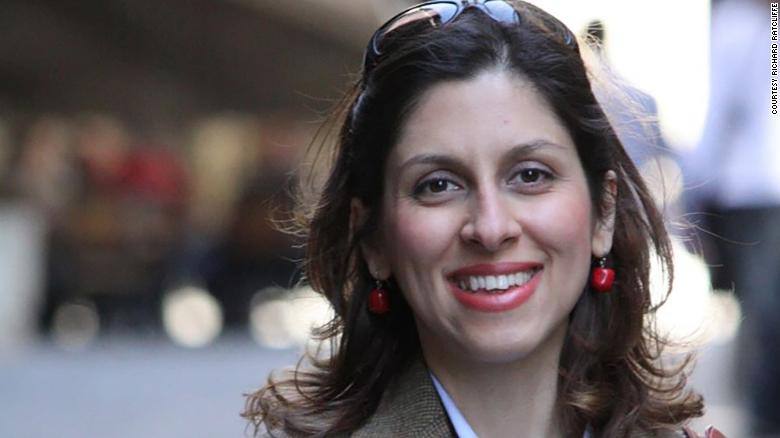 Nazanin Zaghari-Ratcliffe was first detained at a Tehran airport in April 2016 following a vacation to see her family with her daughter.
Zaghari-Ratcliffe and her employer, the Thomson Reuters Foundation, have repeatedly denied the espionage charges against her.
In April 2021 she was handed a second jail sentence and travel ban on charges of spreading propaganda against the regime, and lost an appeal on her case in October.
Zaghari-Ratcliffe was given British diplomatic protection in 2019 and was designated a prisoner of conscience by Amnesty International.
She undertook at least three hunger strikes during her detention, one of them in a desperate bid to seek medical treatment for lumps in her breasts and numbness in her limbs.
Her husband Richard Ratcliffe has also carried out hunger strikes in solidarity with his wife.
The couple’s daughter, Gabriella, who was just 22 months old at the time of her mother’s arrest, is now almost eight.
In 2019, Zaghari-Ratcliffe’s supporters said she was transferred to the mental ward of a hospital in Tehran and was being denied visits from her father.
In February 2020, Zaghari-Ratcliffe’s family said she believed she had contracted Covid-19 in Evin Prison outside Tehran.

Grief, protest and power: Why Iranian women are cutting their hair

Iranian security forces arrest a woman for eating at restaurant in public without her hijab, family says

Iranians are risking it all to protest. Their families say some of them aren’t coming home