Ukraine’s General Prosecutor Iryna Venediktova said a number of Russian soldiers allegedly involved in human rights abuses in the town of Bucha have been identified.

In a Facebook post, Venediktova said 10 soldiers had been identified as being “involved in torture of peaceful civilians” during their occupation of the town.

The soldiers were of various ranks, she said, naming four privates, four corporals and two sergeants. They were from the 64th Separate Motor Rifle Brigade, she added.

Earlier this month, the 64th Brigade was awarded an honorary title by Russian President Vladimir Putin, who praised their “great heroism and courage” and awarded the unit the title of ‘Guards’ for “protecting Russia’s sovereignty.”

“This high distinction recognizes your special merits, great heroism and courage in defending your Fatherland, and in protecting Russia’s sovereignty and national interests,” the congratulatory statement from Putin read.

In a “very short time, the investigation established that during the occupation of Bucha, they took unarmed civilians hostage, didn’t provide food and water to them, kept them on their knees with their hands tied and their eyes covered in duct tape, and they were mocked and beaten. They used fists and the stocks [of their guns]. They beat information about the location of the [Ukrainian] Armed Forces and the Defense Forces out of people, and some were tortured for no reason at all,” Venediktova said.

“Russian servicemen threatened to kill the victims and even imitated the execution of their prisoners by firing in their direction,” she added. “The role and participation of each of them in these crimes has been established through investigative and coordinated work of prosecutors and police officers … We are currently checking on their involvement in the killings in Bucha.” 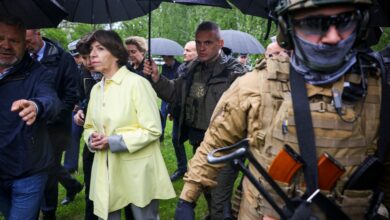