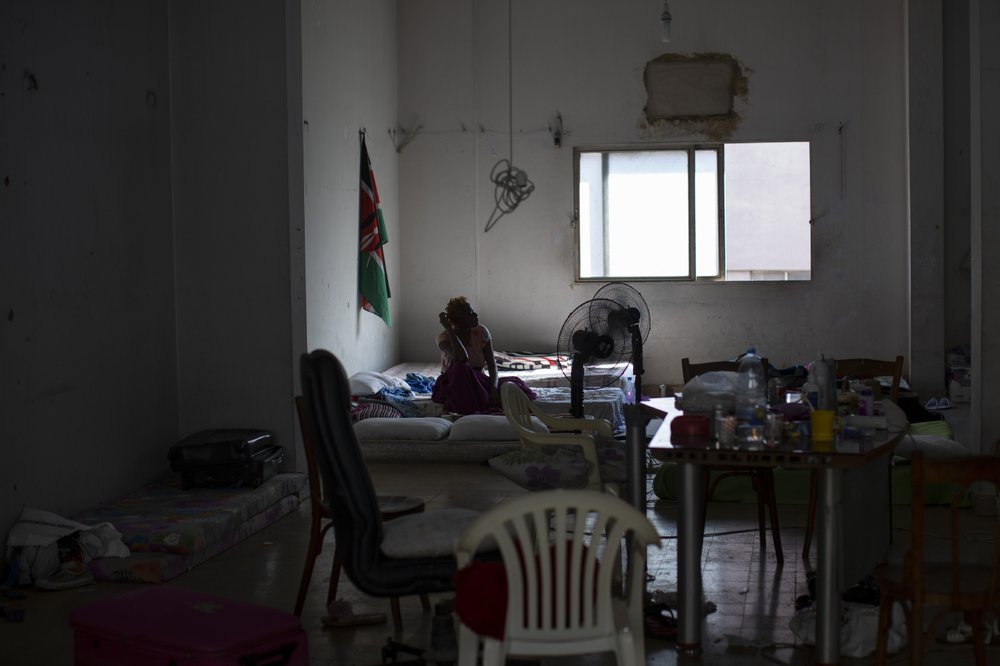 BEIRUT (AP) — In a damp room with a few rotting pieces of furniture and old mattresses on the floor, seven migrant women sit hugging their belongings, a Kenyan flag hanging behind them on the wall.

A Lebanese woman walks into the apartment, located in a poor area east of Beirut, and the migrants rush excitedly to hug her.

“We are finally going home,” says Nancy, a 25-year-old Kenyan. “Déa is a heavenly saint. We experienced a lot here, but Déa and her friend are our saviors.”

Déa Hage-Chahine and Serge Majdalani are two young Lebanese who have partnered on a mission to repatriate domestic migrant workers stranded in Lebanon by the worst economic crisis in the country’s modern history.

In two months, they have helped get home more than 120 women, mostly Kenyans and some Ethiopians, fundraising more than $35,000 for flights and coronavirus tests through an online campaign and working tirelessly to clear bureaucratic and legal hurdles.

It’s a mission both came into unexpectedly. The 33-year-old Majdalani, who works in finance in New York, was visiting his family in Beirut in the summer when he heard about the thousands of migrants lining up outside their embassies trying in vain to get help to leave.

First, he tried to use his brother’s travel agency to arrange private chartered flights for them. “But that was way too costly,” he said.

A friend connected him to Hage-Chahine. Separately, she too had been inspired to act.

“I was walking my dog in Beirut and saw so many women and children on the streets. No one was helping them,” she said. “I could not see that and turn a blind eye.”

Lebanon has some 250,000 migrant workers, most of them women working as maids.

Even before the crisis, they were subjected to abuse under a sponsorship system, known in Arabic as “kafala,” which ties workers to their employers. Rights activists have described the system as a form of “neo-slavery.” Thousands have escaped employers then stayed to work undocumented.

“Workers are viewed as objects here,” said Majdalani. Employers use the fees they pay to brokers to justify barring maids from leaving, he said. “They confiscate their passports as if they owned them.”

Then the bottom fell out of Lebanon’s economy this year in a combination of financial collapse and the coronavirus pandemic. Lebanese have lost jobs and seen the value of their savings evaporate as the currency plunges in value.

Migrant workers were thrown into desperate straits. Many maids have not been paid for months. Some employers dumped them on the streets or outside their embassies.

Now many can’t afford the exorbitant costs of repatriation flights.

Hage-Chahine worked in marketing but has recently been unemployed. In addition to the money from fundraising, she has used some of her savings to pay for a shelter for the women and provide food and medicine.

She spent her days with them on the streets, counseling them, shopping for them. Meanwhile, she and Majdalani worked out the nitty gritty details of arranging departures. They retrieved workers’ passports and belongings from former employers, talked daily with security officials to resolve legal obstacles, and organized and paid for flights.

“We help change someone’s life,” Hage-Chahine said. “Unfortunately, the work we do is actually so small compared to the reality of the problem.”

They played the role of embassies, which they describe as corrupt and incapable of helping the migrants.

On its website, the Kenyan Consulate in Lebanon says it is registering legal and illegal workers seeking to return home. Phone calls to the consulate, which has been embroiled in allegations of abuse and exploitation, went unanswered. The Ethiopian Embassy did not respond to an Associated Press request for a comment

Back at the shelter, the two helped the women load their luggage into a bus.

Nancy, the Kenyan woman who gave just her first name for fear of retaliation, fled her employers years ago because, she said, the children abused her because she’s Black. She has worked without papers since. With no one paying dollars anymore, she couldn’t stay. What she did save is trapped in a bank account by currency controls.

She’s relieved just to get out.

“I am going to see my son and start my own business,” she said. “I will not come back here again.”

The final goodbyes at the airport with Hage-Chahine and Majdalani were emotional for everyone.

“I don’t think anyone will forget what they have done,” said Ririan, 34.

“Seeing their happiness, when they are finally able to leave, is very rewarding,” said Majdalani, who has since returned to New York. “Especially knowing that we are freeing them from horrible living conditions. That is a moment of pride and joy.”

Photo: Natasha, a Kenyan migrant worker sits in a shelter where she is staying with other migrants, in Mkalles, Lebanon, October 9, 2020. Two young Lebanese are on a mission to repatriate migrant workers who have been stranded in Lebanon amid the worst economic crisis in the country’s modern history. In two months, they have sent more than 120 women, mostly Kenyans and some Ethiopians, back home, fundraising more than $35,000 for flights and coronavirus tests. (AP Photo/Hassan Ammar)