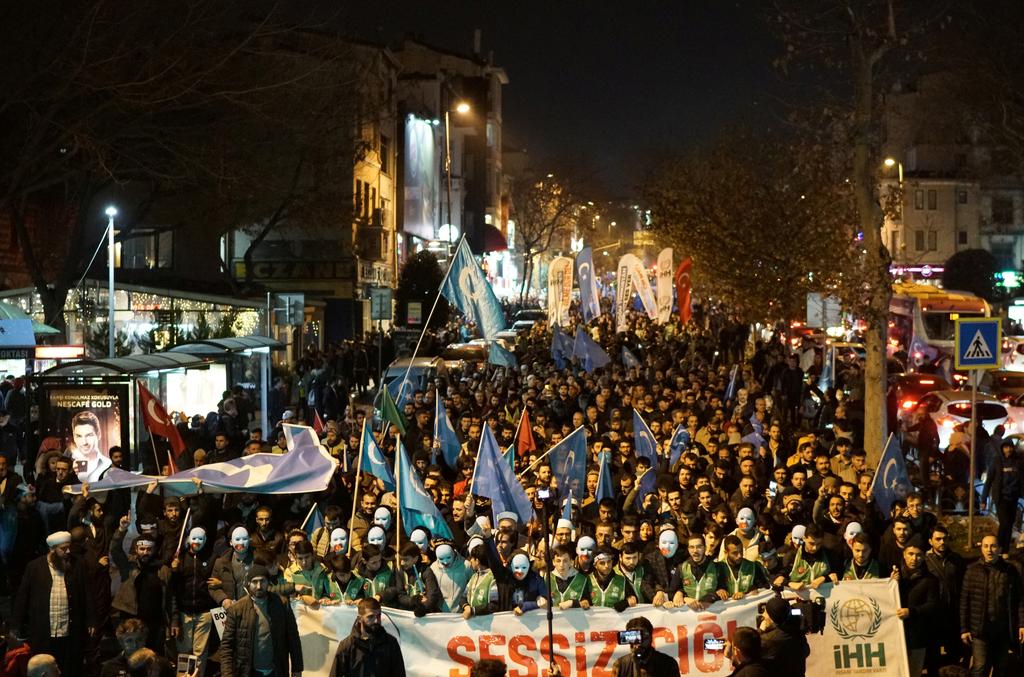 ISTANBUL (Reuters) – Thousands of protesters marched in support of China’s Uighurs in Istanbul on Friday and voiced solidarity with Arsenal midfielder Mesut Ozil after the furore caused by his criticism of China’s policies toward the Muslim minority.

Members of Istanbul crowd held up banners reading “Stop the cruelty” and chanted “Murderer China, get out of East Turkestan” and “East Turkestan is not alone”, using the name that Uighur exiles use for Xinjiang.

The United Nations and human rights groups estimate that between one million and two million people, mostly ethnic Uighur Muslims, have been detained in harsh conditions in Xinjiang as part of what Beijing calls an anti-terrorism campaign.

China has repeatedly denied any mistreatment of Uighurs and its foreign ministry said Ozil had been deceived by “fake news”.

“Mesut Ozil’s honorable behavior inspired us… Everybody should raise their voice against this tyrant like Mesut did,” Adem Adil said, a protester marching with the crowd.

Turkey has in the past expressed concern about the situation in Xinjiang, including in February at the UN Human Rights Council, but has not commented over the Ozil affair.

At the Kuala Lumpur summit on Thursday, a question from the audience on the treatment of Uighurs was ignored after it was put to a dais that included Erdogan, Iranian President Hassan Rouhani and Malaysian Prime Minister Mahathir Mohamad.

Last Saturday, club Arsenal tried to distance itself from his comments, saying it always adhered to the principle of not being involved in politics.

Ozil has received support from former Arsenal manager Arsene Wenger, who defended the player’s right to express his opinion.

Image: Protesters march in support of China’s Uighurs and in solidarity with Arsenal midfielder Mesut Ozil after the furore caused by his criticism of China’s policies toward the Muslim minority in Istanbul, Turkey, December 20, 2019. REUTERS/Umit Bektas