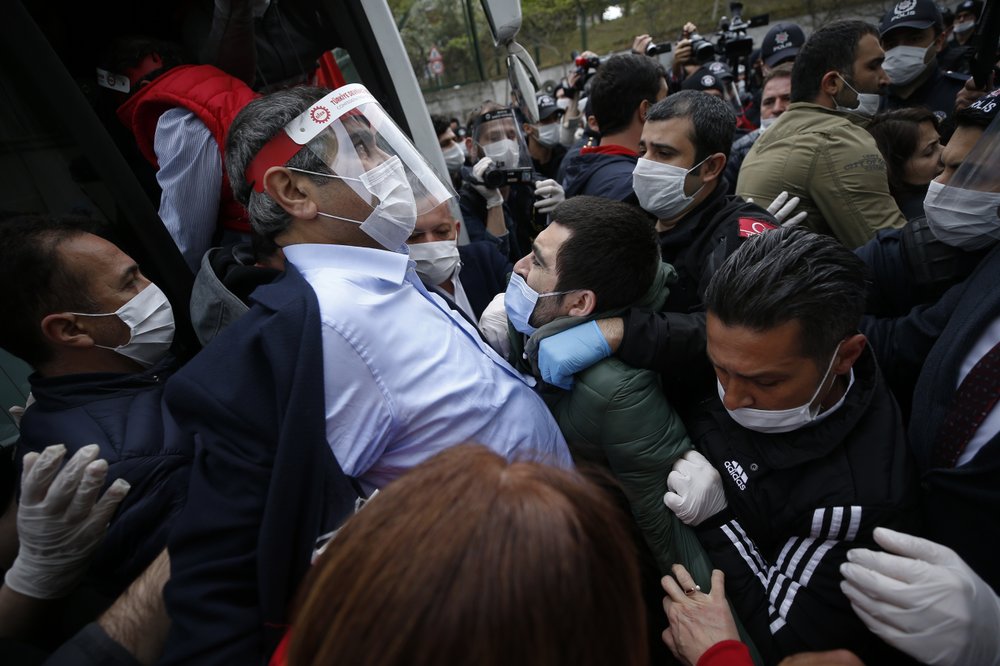 ISTANBUL (AP) — Police in Istanbul detained at least 15 people Friday, including trade union leaders who tried to stage a May Day march in defiance of a coronavirus lockdown and a ban on demonstrations at a historic square.

The Confederation of Progressive Trade Unions of Turkey, or DISK, tweeted that its head Arzu Cerkezoglu and several other union leaders were detained near Taksim Square, where they wanted to lay wreaths of carnations.

The Istanbul governor’s office said the demonstrators were later released. The statement added that various trade unions had left wreaths in Taksim Square as permitted by the governor’s office but that DISK had insisted on collectively marching to the square, which was in breach of lockdown and social distancing rules.

Taksim Square holds a symbolic value for Turkey’s labor movement. In 1977, 34 people were killed there during a May Day event when shots were fired into the crowd from a nearby building.

Opposition lawmakers were later allowed to take DISK’s damaged wreath to the square.

Turkey has imposed partial lockdowns in 31 provinces every weekend and on national holidays. Exemptions apply, including for many laborers who continue to work amid the pandemic. President Recep Tayyip Erdogan has said the country must continue production to ensure the economic “wheels continue turning.”

The ban on May Day demonstrations in Taksim has been in effect for several years, due to security concerns. Police closed all roads leading to Taksim Square with barricades and increased security presence Friday.

Trade unions began marking May Day on Thursday ahead of the COVID-19 lockdown and also urged people to celebrate from their balconies Friday night and participate on social media.

Turkey ranks seventh in the world for the number of confirmed infections with 120,204 cases, according to Johns Hopkins University, although experts believe the actual toll of the pandemic is higher than the tally. The country’s official death toll stands at 3,174.

Image: A demonstrator, wearing a face mask for protection against coronavirus, gestures as he is pushed along with others into a police vehicle after being arrested by Turkish police officers during May Day protests in Istanbul, Friday, May 1, 2020. Police in Istanbul detained several demonstrators who tried to march toward Istanbul’s symbolic Taksim Square in defiance of the lockdown imposed by the government due to the coronavirus outbreak. (AP Photo/Emrah Gurel)

Turkey marks its 100th year of parliament amid coronavirus

May Day marks pain, not celebration for workers hit by virus