Turkey’s military occupation of Libya is escalating through the use of advanced, dangerous weapons, said the Libyan National Army’s (LNA) Commander Khalifa Haftar, who added that the leader of the Government of National Accord Fayez al-Sarraj is working with them to destabilize the country’s southern region.

The LNA is safely controlling and securing Southern and Eastern Libya, Libyan TV channel Al-Hadath quoted Haftar in his phone call to UN Secretary General Antonio Guterres, and added that Western Libya is still under threat of terrorist group and militias.

Turkish Minister of Defense Hulusi Akar signed a military agreement with Sarraj to establish a Turkish military base in Libya, according to media reports. Libyan commander Khaled al-Mahgoub stated that this agreement seeks control over Libya’s oil fields and to penetrate the red line areas adjacent to Egypt’s borders.

Italy meanwhile pledged to ensure that the ban on the transfer of weapons to Libya is among the tasks carried out by the EU’s Naval Force Mediterranean Operation IRINI.

The IRINI is an EU military operation under the umbrella of the Common Security and Defense Policy, launched in March to enforce the UN’s arms embargo to Libya.

Egypt launched in June a new plan to resolve the Libyan crisis dubbed the “Cairo Declaration”, expressing a firm desire to enforce the Libyan people’s wish goals of stability and development, to preserve the country’s sovereignty and to put its interests first and foremost.

Egypt’s plan will respect all international efforts to resolve the Libyan crisis thus far and includes a 48-hour ceasefire throughout Libyan territories, dismantling militias and handing their weapons over to the LNA, expelling foreign mercenaries out of the country, and resuming the 5+5 Libyan Joint Military Commission under the auspices of the UN. 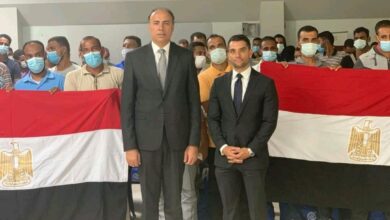