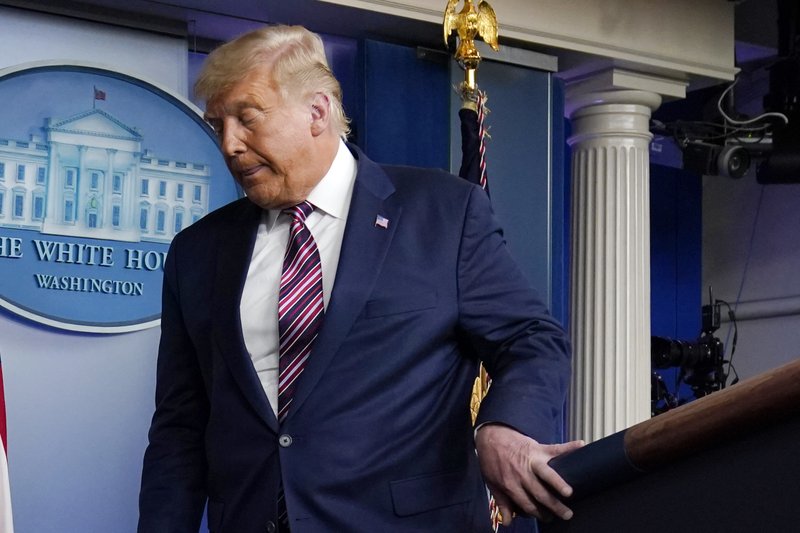 WASHINGTON (AP) — President Donald Trump’s wild and unsupported claims of voter fraud have emerged as a high-stakes Republican loyalty test that illustrates the tug of war likely to define the future of the GOP whether he wins or loses the presidency.

There is a pervasive sense among current and former GOP officials that the president’s behavior is irresponsible if not dangerous, but a divide has emerged between those influential Republicans willing to call him out publicly and those who aren’t.

Driving their calculus is an open acknowledgement that Trump’s better-than-expected showing on Election Day ensures that he will remain the Republican Party’s most powerful voice for years to come even if he loses.

That stark reality did little to silence the likes of Maryland Gov. Larry Hogan, a second-term Republican who has not ruled out a 2024 White House bid. He described the president’s claims as “dangerous” and “embarrassing.”

“If there are legitimate challenges, we have a process, that’s the way it works,” Hogan told The Associated Press. “But to just make accusations of the election being stolen and widespread fraud without providing any evidence, I thought was really bad for our democratic process and it was something I had never seen in my lifetime.”

“Other Republicans did speak up,” he noted, “but certainly not enough of them.”

Indeed, the most aggressive Republican criticism was limited to the small and familiar group of frequent Trump critics such as Utah Sen. Mitt Romney and Nebraska Sen. Ben Sasse, who will not face Republican voters again for at least four years.

On the other side were Trump allies, including the president’s eldest son, Donald Trump Jr., who called on Republicans considering running for the party’s nomination in 2024 to come to the president’s defense.

“The total lack of action from virtually all of the ‘2024 GOP hopefuls’ is pretty amazing,” he tweeted. “They have a perfect platform to show that they’re willing & able to fight but they will cower to the media mob instead.”

Several quickly raised their voices, including former South Carolina Gov. Nikki Haley, who served as Trump’s ambassador to the United Nations, though some Trump allies saw Haley’s statement on Twitter thanking Trump for helping to deliver “conservative victories” up and down the ballot as reading too much like a political obituary of sorts for the president.

Missouri Sen. Josh Hawley, another Trump ally in the 2024 conversation, avoided embracing some of Trump’s most outlandish claims, but vowed to introduce new “election integrity” legislation to address some of the complaints Trump’s campaign has raised.

“You can’t stop the count in one state and decide you want the count to continue in another state,” Blunt told reporters. “That might be how you’d like to see the system work but that’s not how the system works.”

As votes were tallied across the country Friday afternoon, Biden was on the cusp of winning the presidency as he opened up narrow leads in the critical battlegrounds of Georgia and Pennsylvania. The shifts put Biden in a stronger position to capture the 270 Electoral College votes needed to take the White House.

With things trending in the wrong direction for him, Trump continued to spread baseless rumors of voting fraud throughout the day, calling on the Supreme Court to intervene even as his campaign struggled to produce significant evidence of malfeasance.

Still, there was no shortage of Republican leaders willing to back him up — especially after Donald Trump Jr. called out their silence on social media.

On Fox News the night before, Graham said he was transferring $500,000 from his campaign account to Trump’s legal fund, and called for others to make donations as well.

“I wish people talked with less bombast. But I’m not going to fault the president for it,” Fleischer said.

“Be gentle about Trump’s behavior,” he urged. “When I watched it last night and watched these heads explode I just rolled my eyes. … We’ve always been a noisy democracy.”

Yet history suggests that Trump’s rhetoric and actions go well beyond the normal trappings of democracy. Never before has a sitting president so aggressively undermined the integrity of a U.S. election.

His strategy was entirely predictable. With polls showing him lagging, Trump raised questions about the integrity of the voting system for much of the year. Yet his words from the White House this week were no less shocking.

Even internally, some advisers did not want him to address the nation Thursday night when he made his most outrageous claims.

Wisconsin Sen. Ron Johnson, a staunch Trump ally, highlighted the obvious downside of Trump’s questions about the integrity of the voting process.

“It’s very unfortunate that no matter who wins, the other half of America is not going to view this as a particularly legitimate election,” Johnson said on WTMJ-AM, a local radio station. “I’m not saying it’s legitimate or not. I’m saying this process has been set up where people are not going to view it as legitimate. And that’s a real problem.”

Trump spent most of Friday behind closed doors at the White House, angry about the direction of the race and insisting that his aides and allies push back. There was no indication he would concede, no matter what the final vote tally showed.

Hogan, the Maryland governor, acknowledged that Trump would have “an important voice with the base of the Republican Party” moving forward regardless of the 2020 election’s outcome.

“I’m sure he’s going to be a factor to contend with,” Hogan said. “I don’t anticipate him going quietly.”

By STEVE PEOPLES and JILL COLVIN

Nations long targeted by US chide Trump’s claims of fraud

Democrats losing paths to Senate control as GOP hangs on