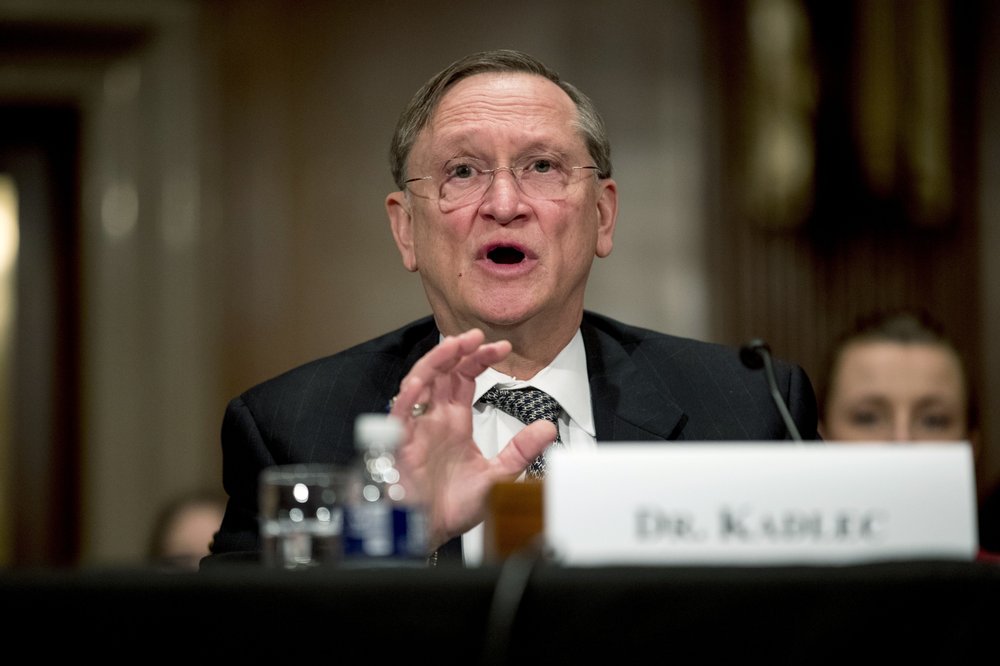 Trump administration official leading the response to the coronavirus pandemic says the US can expect delivery of a vaccine starting in January 2021, despite statements from the president that inoculations could begin this month.

And a growing, bipartisan chorus of lawmakers, experts and public health officials says the country is ill prepared for a projected winter surge of COVID-19.

Dr. Robert Kadlec said in an email Friday that the administration “is accelerating production of safe and effective vaccines … to ensure delivery starting January 2021.” Kadlec is the Department of Health and Human Services’ assistant secretary of preparedness and response. HHS says a vaccine could be approved before the end of the year but will take time to distribute.

President Donald Trump has said at rallies, debates and press conferences that a vaccine could arrive within weeks. “We think we can start sometime in October,” Trump said at a White House press briefing last month.

Kadlec wasn’t the first health official to counter the president’s optimistic timeline. Health and Human Services Secretary Alex Azar said Thursday that there could be 100 million vaccine doses available by the end of the year “pending FDA authorizations.” And Dr. Moncef Slaoui, who is leading the government’s vaccine effort, told Marketwatch on Friday that researchers could know “by late October, or November, or in December” whether one of the vaccines in development is effective, but that it would then take weeks to get emergency authorization to administer it.

When asked about the disparity, the White House was not specific on a date but said Trump’s priority is to distribute a vaccine “as soon as possible.” Kadlec said, without elaborating, that it wasn’t correct to conclude that this meant the country couldn’t see a vaccine sooner than January.

Kadlec was responding to a series of questions from The Associated Press and FRONTLINE about the administration’s response to the pandemic and, in particular, about shortages of critical medical supplies.

EDITOR’S NOTE: This story is part of an ongoing investigation by The Associated Press, the PBS series FRONTLINE and the Global Reporting Centre that examines the deadly consequences of the fragmented worldwide medical supply chain and includes the film America’s Medical Supply Crisis.

The AP and FRONTLINE reported earlier this week that a breakdown in the supply chain for critical medical equipment including masks, gloves, gowns and ventilators hobbled the US response to COVID-19 and was likely a factor in the country’s death rate, which is higher per capita than almost every other country in the world.

Experts say those shortages could now extend to the syringes, needles and glass vials that are vital to a future nationwide vaccination program.

Kadlec agrees that supply chain disruptions led to shortages. He said the administration needs more, consistent, flexible funding from Congress to shore up the Strategic National Stockpile of medical supplies and drugs and expand domestic manufacturing.

“There seems to be universal consensus from both sides of the aisle in Congress, from the health care sector and from the manufacturing base, that it is critical to move from a just-in-time manufacturing model to a more flexible and resilient domestic manufacturing capability,” he said.

Health experts have called for the same changes but say there’s a vacuum of federal leadership to implement them right now.

“Having a single national coordinated strategy would help ensure that states, hospitals, physician offices and other facilities have a single, centralized authority to work through to acquire essential personal protective equipment,” American Medical Association President Dr. Susan Bailey told the AP and FRONTLINE on Thursday. “The burn rate of personal protective equipment and medical supplies has been far greater than anything that we have experienced and for a far longer time, and the need for PPE and testing supplies will continue for the foreseeable future.”

The collapse of the medical supply chain wasn’t unexpected: For decades, politicians and corporate officials ignored warnings about the risks associated with America’s overdependence on foreign manufacturing and a lack of adequate preparation at home.

Of the hundreds of COVID-19 related bills introduced in Congress this year, only a handful seek to resolve supply chain issues; none of those has reached the president.

“We need to claw back our medical supply chain back to the US,” said Sen. Marsha Blackburn, R-Tenn., who has sponsored bills to bolster the US pharmaceutical manufacturing base.

Roughly nine months into the pandemic, health care workers and even the Government Accountability Office report there still isn’t enough protective equipment for frontline workers or adequate coordination from the federal government. And although there are emergency preparedness and response plans in place, implementation has been inconsistent.

“We went into this pandemic unprepared, and we remain so months later,” said Boris Lushniak, former acting surgeon general in the Obama administration. “It is time to reevaluate the complete medical supply chain in the US The federal government needs to take on the leadership role here.”

Across the country, public health leaders are warning about the coming months.

“A cohesive national plan for equitably distributing PPE has still not been proposed, let alone implemented,” said Harvard Medical School professor Dr. Andrew T. Chan, who found Black, Hispanic and Asian health care workers had the highest risk of contracting COVID-19. “Thus, we will continue to fly by the seat of our pants with our fingers crossed for the foreseeable future.”

Michael Lu, dean of University of California, Berkeley’s school of public health, said one important part of the solution lies in a bipartisan bill fast tracked in the Senate that would rebuild the Strategic National Stockpile and strengthen US manufacturing of medical masks, gowns and other protective gear.

“We weren’t ready for the pandemic,” Lu said. “And we are still not ready.”

By MARTHA MENDOZA AND JULIET LINDERMAN

Image: FILE – In this March 3, 2020 file photo, Health and Human Services Assistant Secretary for Preparedness and Response Dr. Robert Kadlec testifies before a Senate Education, Labor and Pensions Committee hearing on the coronavirus on Capitol Hill in Washington. Kadlec said in an email Friday, Oct. 9, that the Trump administration “is accelerating production of safe and effective vaccines … to ensure delivery starting January 2021.” (AP Photo/Andrew Harnik)

Push to bring coronavirus vaccines to the poor faces trouble