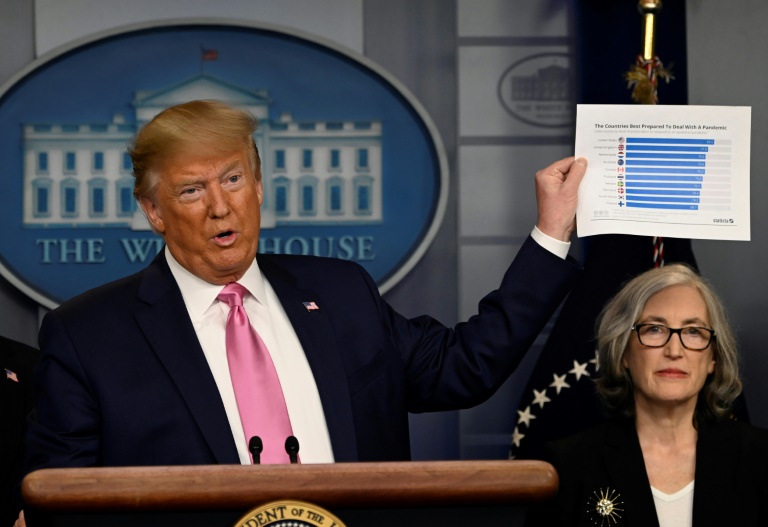 President Donald Trump has played down fears of a major coronavirus outbreak in the United States, even as infections ricochet around the world, prompting Saudi Arabia to ban pilgrims from visiting Islam’s holiest sites.

China is no longer the only breeding ground for the deadly virus as countries fret over possible contagion coming from other hotbeds of infection, including Iran, South Korea and Italy.

There are now more daily cases being recorded outside China than inside the country, where the virus first emerged in December, according to the World Health Organization.

More than 2,700 people have died in China and some 78,000 have been infected. There have been more than 50 deaths and 3,600 cases in dozens of other countries, raising fears of a pandemic.

“I think that there’s a chance that it could get worse, a chance it could get fairly substantially worse, but nothing’s inevitable,” Trump told reporters at the White House.

His comments contradicted US health officials who urged Americans to be ready to cancel mass gatherings and work from home. There are 60 cases in the US so far.

Following Trump’s upbeat assessment, the US Centers of Disease Control and Prevention said it had detected the first case of unknown origin in the country, signalling that the virus may be spreading within communities.

The US and other countries are also bracing for more cases to be imported from abroad, with growing concern for poorer nations with weak health care systems.

With the virus spreading in the Middle East, Saudi Arabia suspended visas for visits to Islam’s holiest sites for the “umrah” pilgrimage, an apparently unprecedented move, raising questions over the hajj which starts in July.

The foreign ministry said it was also suspending visas for tourists visiting from countries where the new virus is a “danger”.

Several governments have now also advised against travel to Italy — which has 400 cases and 12 deaths. Iran’s neighbours have shut their borders, while Mongolia has suspended flights from South Korea and Japan.

Trump said the US was considering travel restrictions on Italy and South Korea, which has almost 1,600 cases, the highest number outside China. The US already restricts arrivals from China.

Even China – which sealed off an entire province and shut down cities across the country to contain the virus – is now worried about importing cases and ordered people arriving in Beijing from virus-hit countries to go into 14-day self-quarantine.

The virus is believed to have originated in a market in the central Chinese city of Wuhan, where it is suspected of having hopped from animal to human before spreading across the country and proliferating abroad.

China reported 29 more deaths Thursday – its lowest daily tally since January – and 433 new cases, most of them in hard-hit Hubei province and well below massive increases from just a week ago.

Zhong Nanshan, a respected scientist who advises the government, said the country would have had much fewer cases if action had been taken as early as December – a rare critique from a prominent insider.

Hubei officials have been accused of initially covering up the outbreak and silencing a whistleblowing doctor who later died from the disease.

Nevertheless, Zhong said he expected China to bring the epidemic under control by late April.

But other countries have now become sources of concern.

In Romania, a man was infected after coming in contact with a visiting Italian.

Countries from Denmark to Spain and Algeria have also reported infections linked to Italy.

The first cases in Afghanistan, Pakistan and Estonia involved people who had been in Iran.

Iran has emerged as a major hotspot in the region, where 22 people have succumbed to the disease – the biggest death toll outside China.

The Islamic Republic imposed domestic travel restrictions for people with confirmed or suspected cases and slapped curbs on visits to major Muslim pilgrimage sites, but it said it was not quarantining cities.

Fears over the epidemic’s spread have rocked global markets in recent days, while sports matches and festivals across Europe have been cancelled.

The US and South Korea’s militaries on Thursday postponed forthcoming joint exercises because of the outbreak.

A Six Nations rugby match between Italy and Ireland in Dublin on March 7 has been called off, and next month’s alpine skiing World Cup Finals in Italy will be held without fans on the slopes.

The WHO has urged countries to prepare for a potential pandemic, though it stopped short of declaring one.

Australian Prime Minister Scott Morrison, however, said his government was “effectively operating now on the basis that there is one – a pandemic”.

“This is a situation of concern, but we must not give in to panic,” Kyriakides said.

Image: US President Donald Trump speaks at a news conference on the COVID-19 outbreak as CDC Principal Deputy Director Anne Schuchat (R) looks on at the White House (AFP/Andrew CABALLERO-REYNOLDS)

How deadly is new coronavirus? It’s still too early to tell