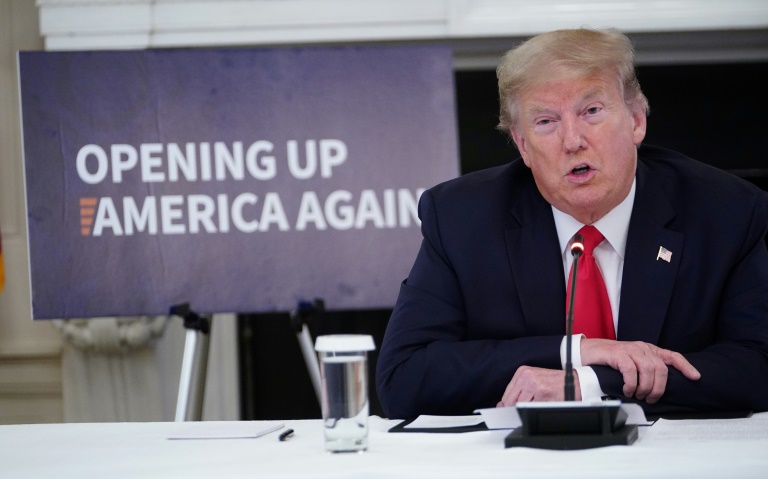 US President Donald Trump said he is severing ties with the World Health Organization over its handling of the coronavirus pandemic, as the death toll from the disease spiked again in the United States and Brazil.

Trump’s move signals an end to hundreds of millions of dollars in funding to the United Nations agency just when it needs it most, with outbreaks in many parts of the world yet to reach their peak.

Countries in Latin America are bracing for difficult weeks ahead, especially Brazil, where the death toll shot up by 1,124 on Friday and there was a record number of new infections.

Trump initially suspended funding to the WHO last month, accusing it of not doing enough to curb the early spread of the virus and being too lenient with China, where the virus emerged late last year.

On Friday he made that decision permanent in a major blow for the agency’s finances, as the United States is by far its biggest contributor, pumping in $400 million last year.

“Because they have failed to make the requested and greatly needed reforms, we will be today terminating our relationship with the World Health Organization,” Trump told reporters.

The Republican leader said the US would be redirecting WHO funds “to other worldwide and deserving urgent global public health needs.”

“The world needs answers from China on the virus. We must have transparency,” Trump said.

Beijing has furiously denied US allegations that it played down or even covered up the threat from the virus after it was detected in the Chinese city of Wuhan in December, insisting it has been forthcoming.

The pandemic has since claimed almost 364,000 lives globally and the number of cases is nearing six million.

Populations are now learning to adjust to life with the long-term threat of infection as the virus continues its march around the globe and a vaccine remains elusive.

As the disease spreads across South America, the poor have been hit hard in countries like Brazil, which now has the second highest number of cases in the world after the United States.

Lockdowns have interrupted the meager services many depend on, such as school lunches for hungry children and water deliveries.

“In 26 years, I’ve never seen so many people living in fear, so many people going hungry,” said Alcione Albanesi, founder of charity Amigos do Bem, which distributes supplies to communities in the impoverished Sertao region of Brazil’s northeast.

“Everything has ground to a stop. But hunger doesn’t stop.”

Chile also logged another record number of deaths on Friday, pushing its total to almost 1,000.

The surge in the Americas comes as the number of infections continues to fall in much of Europe, which is pressing on down the path to re-opening after months of crippling lockdowns.

Italy’s iconic Leaning Tower of Pisa is set to open Saturday, cinemas will reopen in Austria, and parks are scheduled to throw open their gates in Paris.

Tourism-dependent Greece said it will restart its two main airports for arrivals from 29 countries from June 15. But some European nations hard hit by the virus are not on the list, including France, Spain, Britain and Italy.

In Austria, hotels were on Friday allowed to take in tourists again under special guidelines, provided masks are worn.

“It’s of course a lot more effort now. But the most important thing is that guests return,” Gilbert Kratschmann, marketing manager at the Das Triest hotel in Vienna, told AFP.

Turkey too moved ahead with easing its restrictions as mosques opened for the first time in months, drawing hundreds of worshipers in masks for mass prayers in Istanbul.

And Denmark said it would reopen its border to visitors from Germany, Norway and Iceland from June 15, although Britain and the rest of the European Union will have to wait a few more months for access.

Across the Atlantic, the US capital Washington resumed outdoor dining with social distancing precautions in place, and in New York Governor Andrew Cuomo said the state was “on track” to begin reopening in the week of June 8, even as the death toll in the US spiked again by 1,225 on Friday.

Disney World in Florida said it will be up and running again from July 11.

The economic damage from weeks of lockdowns continues to pile up, with Chile taking out a two-year $24 billion credit line with the IMF Friday to tackle the virus fallout.

India’s economy grew at its slowest pace in two decades in the first quarter, and Canada and Brazil also said their GDP figures shrank.

Germany and the European Commission meanwhile reached agreement on a giant Berlin-funded rescue plan for virus-hit airline Lufthansa, a commission spokeswoman and a source close to the negotiations said.

As the lockdowns now finally lift, some people are reveling in the return of long-missed creature comforts.

In Japan traditional bathhouses have begun to open their doors again, much to the delight of businessman You Sasaki, who told AFP he had been counting down the days to his next soak in the warm pools of Yumominosato onsen, just outside Tokyo.

“This feels good. Feels great,” the 50-year-old said as he sat in a tub enjoying the early summer sun and a gentle breeze.

“The last time I came here was the end of March. The onsen is always special. It’s hard to explain in words.”

Image: AFP / MANDEL NGAN US President Donald Trump has cut ties with the World Health Organization over its handling of the coronavirus pandemic