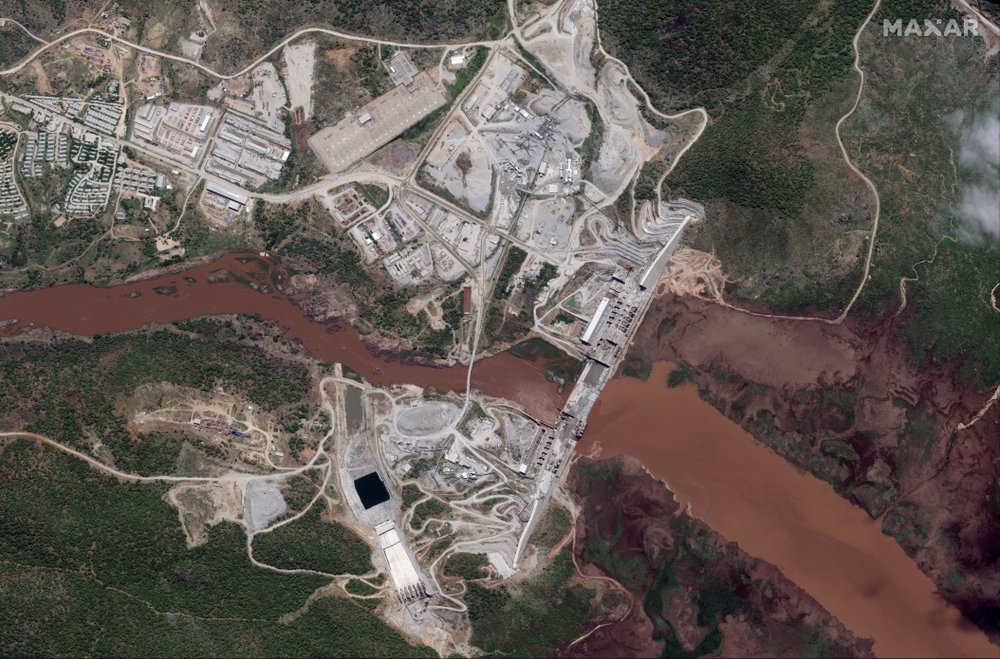 A meeting between Egypt, Sudan and Ethiopia was held Wednesday to discuss the Grand Ethiopian Renaissance Dam, with a draft of proposals to be submitted to the water ministers on Friday, a statement from the Egyptian Ministry of Irrigation announced.

An official statement issued by Egypt’s Irrigation Ministry said that the ministers agreed on several executive steps during the mini-African summit held on July 21, and the six-way meeting of foreign and irrigation ministers from all three countries.

A small committee consisting of a technical member and a legal member from each country, in the presence of observers and experts, began to compile proposals into a single draft, the statement added, with the draft set to be presented to the water ministers of the three countries next Friday.

According to the statement, this move comes as part of the framework of efforts to finally reach a consensus regarding all remaining contentious points and to prepare a report to be presented to the President of South Africa, the current chair of the African Union, on August 28.

The spokesperson for Egypt’s Ministry of Irrigation and Water Resources Mohamed al-Sebaie on Tuesday stressed that negotiations on the Grand Ethiopian Renaissance Dam (GERD) are “a crucial matter that needs patience,” and emphasized Egypt’s desire to achieve all common interests.

GERD negotiations resumed on Tuesday after a one-week halt featuring the participation of the Ministers of Foreign Affairs and Irrigation from all three countries, to reach a binding agreement regarding the dam’s filling and operating.

Cairo and Khartoum on Saturday stressed the importance of negotiating to reach a binding agreement on filling and operating the GERD in a way that preserves the rights and interests of the three countries.

Egypt had announced on August 10 a one-week-long suspension of negotiations on the GERD. The decision was made at the request of Sudan, so that it can complete internal consultations following Ethiopia’s insistence that it is seeking a non-binding agreement on the dam.

Egypt said that the Ethiopian Water Minister preempted the meeting of August 4 by sending a letter to his counterparts in Egypt and Sudan that contained draft guidelines and rules for filling the dam, but that did not include any operating rules or any elements that reflect the legal obligation of the agreement.

Egypt stated that the Ethiopian proposal contradicts what was agreed upon during the African Union Bureau Summit on July 21, as well as the results of the water ministers’ meeting on August 3.

The meetings of the second round of GERD negotiations began on July 27 under the auspices of the AU and in the presence of observers from the United States and the European Union, and experts of the African Union Commission. Its aim is to reach a binding agreement regarding the filling and operation of the dam. The meetings are based on the outcomes of an African Union presidential summit held on July 21.

Egypt and Ethiopia have been in multiple rounds of negotiations over the dam during the past nine years, all of which have failed to reach a final agreement. Egypt blames Ethiopia for the failure of negotiations.

Ethiopia’s Foreign Ministry announced late last month that it is not seeking a binding agreement with Egypt and Sudan on the contentious GERD that it is constructing on the Blue Nile river, the main tributary of the Nile river.

The Ethiopian Foreign Ministry’s spokesperson Dina Mufti said that his country is instead seeking a guiding agreement that can be modified as needed.

Egypt, which relies considerably on fresh water from the Nile, has voiced fears that the GERD would negatively impact the country’s water supply, especially in light of overpopulation fears, and has insisted that measures be put in place to protect downstream countries in case of drought during the dam’s filling process.

Ethiopia, on the other hand, has stressed the importance of the project to bolstering its economy, where more than half of the population currently lives without access to electricity.