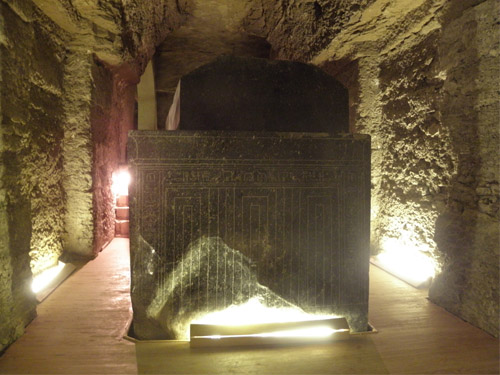 Saqqara is renowned for being one of Greater Cairo’s most alluring locations for archaeologists and tourists alike. One of the main reasons many prefer this archaeological site to the Giza Pyramids north of it is that it’s home to antiquities that date from the earlier kings of ancient Egypt all the way to the Greco-Roman period — a time span of almost 3,500 years.

Amid the slump in the site’s visitors since last year’s uprising, the Antiquities Ministry officially inaugurated the Serapeum in Saqqara at the end of September, hoping to send out a message to tourists that Egypt is safe again, with new sites to see.

The Serapeum, originally known as the Apis bull tombs, was where ancient civilizations would mummify and bury bulls in vaulted tombs and sarcophagi with jewels, to worship gods such as Osiris, Apis, Ptah and, later, the Greco-Egyptian Serapis, who was a combination of Osiris and Apis. The evolution of the types of gods and worship practices highlighted in the Serapeum’s inscriptions is testament to how much history is contained in the Saqqara antiquities site — and particularly the Serapeum.

This burial site is not newly discovered — it has actually been under restoration for almost three decades. Antiquities Minister Mohamed Ibrahim Ali says the Serapeum is the first of many new restoration projects around Egypt intended to entice new tourists.

A visit to the site entails a long walk northwest into the Saqqara desert, past the large Djoser Step Pyramid and down winding dirt tracks, past statues of Greek philosophers.

The entrance to the Serapeum faces south and lies underground, at the bottom of a series of very large steps. Onsite Inspector of Archaeology Azmy Salama says that, similar to Tutankhamen’s tomb, the Serapeum had been deeply buried under sand until its accidental discovery by Auguste Mariette, who was actually looking for Coptic scriptures during the mid-19th century.

Upon entering, the first room is almost pitch black, and one is forced to either go left or right through doorways leading to long, beautifully lit underground hallways.

These hallways are home to 24 sarcophagi that date from various periods between the 26th Dynasty to the Greco-Roman period, hence the diversity in their designs, explains Salama.

The restoration of the tombs now sees its interior adorned with smooth wooden floors and polished walls with added reinforcements. Glass windows in the floor in some parts allow visitors to see through to the original limestone flooring.

Many of the chambers containing sarcophagi have also had metallic support frames installed, which was a huge matter of debate during the restoration planning process. Temperature and humidity monitors have also been installed, as fluctuations are thought to have been damaging the tombs since the 1970s.

Walking down the hallways, one passes chamber after chamber containing various extremely large sarcophagi, as they were used for mummified bulls. All of the sarcophagi in the site are empty, but are covered with inscriptions and hieroglyphics. The lids lie on top, slightly ajar.

When Mariette first discovered the Serapeum, all the sarcophagi had been broken into and their contents removed, except for one. Mariette blew open this one with dynamite; the bull mummy is said to be at the Agriculture Museum in Cairo, and the jewels are in various museums around the world.

When asked why, after so many break-ins, one sarcophagi remained unopened in such a small underground cavern, Salama suggested that it is likely that it was filled and placed in the Serapeum centuries after the others had already been broken into.

The most beautiful sarcophagus in the site is also the only one whose chamber you can actually walk into. It is made with smooth black granite, and has hieroglyphics chiseled into it.

The period this particular sarcophagus is from is unknown, as no god was chiseled into the designated space, so it is presumed to have gone unused.

It takes about 30 minutes to go around the Serapeum’s hallways, which are aligned in the shape of a rectangle with the entrance on the south side. However, there remains one section of the Serapeum that is still under restoration, and a bolted door blocks the path. This section is expected to open within the next year.

Due to the limited, albeit complex, chronology of sarcophagi discovered in the Serapeum, archaeologists generally think there are still many more out there, waiting to be discovered. Upon visiting, a Polish excavation team was looking for something only a couple hundred meters away.

Nonetheless, the great Serapeum tomb is particularly beautiful and intriguing and a very welcome addition to Egypt’s modern archaeological map.