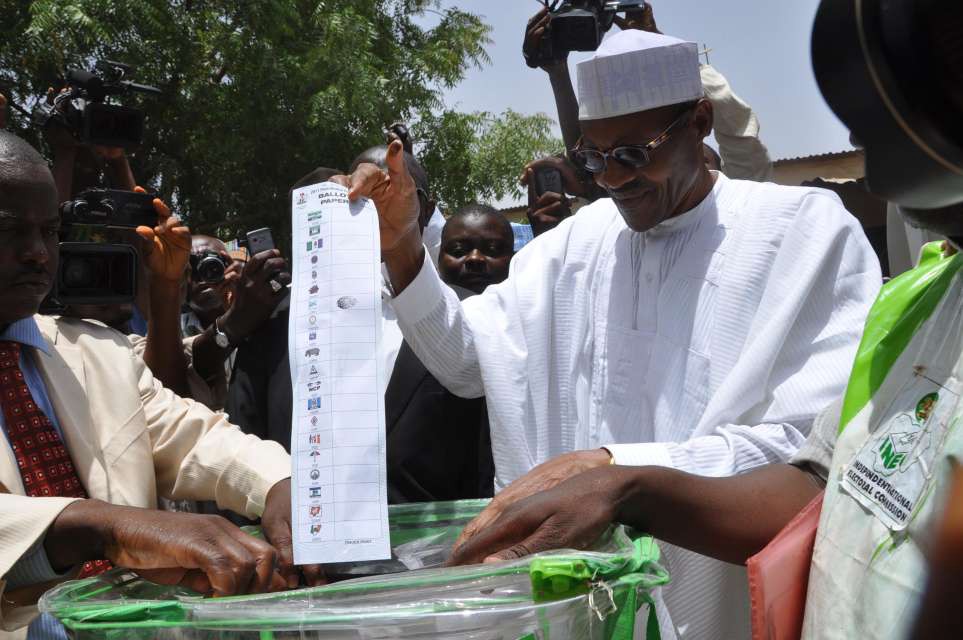 There are more than 60 other candidates, though their chances of winning are slim as the wealth and patronage networks of the two main parties drive the politics of Africa’s top oil producer and most populous country.

Buhari’s 2015 victory with his All Progressives Congress (APC) party was built on three promises: to rid Nigeria of endemic corruption, fix the economy and tackle security threats.

The government says it is making progress but the military’s efforts to fight the Boko Haram Islamist insurgency and its Islamic State-allied offshoot, now in its tenth year, are crumbling.

The economy entered and climbed out of recession under Buhari, yet the average Nigerian is still getting poorer; and opponents say his government is failing to tackle corruption, targeting only the president’s enemies and ignoring allegations against his allies.

Amnesty International and Human Rights Watch say the army has been responsible for human rights abuses, including the massacre of protesters. The army has said its use of force is justified.

After spending five months in Britain in 2017 receiving treatment for an undisclosed ailment, opposition groups and other critics said Buhari was unfit for office and his administration was beset by inertia. But the president has said he is strong enough to serve.

If Buhari wins again, Nigeria would be in for another four years of political torpor and disregard for rights, his opponents say.

The president said he would continue to develop the rail and road network if reelected for a second term. He has also vowed to expand a nationwide vocational skills program, improve access to credit for entrepreneurs and continue his fight against corruption.

Atiku, the candidate of the main opposition People’s Democratic Party (PDP), has been caught up in corruption allegations since serving as vice president from 1999-2007. He has repeatedly denied any wrongdoing.

His businesses include a port logistics firm and a private university. He has promised business-friendly policies to double the size of the economy to $900 billion by 2025 if elected.

He wants to privatize parts of the state oil company and create a $25 billion fund to support private sector infrastructure investment.

Atiku’s opponents say he would exploit those pro-business policies to enrich himself and those around him.

Nigeria is deeply divided. The north is mainly Muslim and the south is largely Christian and the population is fairly evenly split between religions. There are also more than 200 ethnic groups. The three largest are the Hausa in the north, the Yoruba in the southwest and the Igbo in the southeast.

The divisions have led to an unofficial power-sharing agreement among Nigeria’s political elite. The presidency is supposed to alternate between the north and south after every two four-year terms.

Buhari, a northern Muslim, is in his first term, having held the post since 2015. His predecessor, the PDP’s Goodluck Jonathan, is a southern Christian. In keeping with the accord, the PDP selected Atiku, a northerner, as its candidate for 2019.

As it is not the turn of a southerner, and both Atiku and Buhari are Muslims from the Fulani ethnic group – one of the largest in the north – the chance of election violence around ethnicity, religion and region is reduced. However, the south has favored the PDP in the past, while the north is Buhari’s stronghold.

In the diverse Nigerian hinterland states known as the Middle Belt, the picture is less clear. Long-running violence over diminishing arable land between farmers and nomadic herders has exploded, with a death toll of more than 3,600 since 2016, according to Amnesty International.

This could turn the Middle Belt, much of which voted for Buhari, into swing states.

Nigeria’s median age is just 18, according to the United Nations. Many youths say the aging leaders are out of touch and started the “Not Too Young to Run” campaigns to encourage younger people to seek office.

Buhari, 76, is the oldest person to lead Nigeria since the transition to civilian government in 1999 and the PDP chose 72-year-old Atiku as their candidate. Both men have said they remain energetic enough to take on the top job.

Buhari himself is a retired general who was head of state from 1983-1985. Other military-era chiefs continue to wield political leverage, including Olusegun Obasanjo, who led the country in the 1970s and was president from 1999-2007, and Ibrahim Babangida, who ruled from 1985-1993. Both back Atiku.

The two main parties, the ruling APC and opposition PDP, do not have clear ideological differences. Competition for control of national oil revenues by elites, patronage and complex rivalries between ethnic groups have played a much bigger role in elections than ideology.

However, Buhari’s 2019 campaign has prioritized poverty alleviation and social schemes, while Atiku has stressed the need for a better business environment. Both vow to improve the decrepit infrastructure.

Buhari won in 2015 after assembling a broad coalition across the north and southwest under the APC party, a version of the other vehicles he used to run in 2003, 2007 and 2011.

The PDP has links to the military and held power until Jonathan’s defeat in 2015. The party has traditionally appealed to the business community, which developed during the military regime.

Atiku, a long-time PDP member, joined the APC and became a key ally and funder of Buhari during the 2015 campaign, allowing him to use the tycoon’s private jet. Atiku switched sides in late 2017.

International observers and civil society groups fear election interference and rigging. They expressed concern about the way some state level votes were conducted last year and have called for free and fair elections to take place.

The 2015 contest is the only time Nigeria has had a handover of power from a defeated incumbent since civilian government took over in 1999. Even then, independent observers saw evidence of vote buying, voter intimidation and other forms of corruption.

Last month, Buhari triggered a constitutional row when he suspended the chief judge, who has a crucial say in resolving election result disputes, over his alleged violation of wealth declaration rules. The judge has not responded to the charges and his lawyers say the tribunal investigating the allegations does not have the authority to try him.

The European Union, United States and Britain said they were concerned about the move. Nigeria said foreign governments should “tread with caution” and that their interference was “insulting”.

The elections feature in discussions and on news feeds in social media. The government launched a campaign against “fake news”. Facebook said it would roll out some of its political advertising rules and tools for curbing election interference to Nigeria.

The National Security Adviser’s office released a statement on Feb. 1 saying the internet would not be shut down during the vote.

Voter turnout in the 2015 election was 29.4 million, or 44 percent of the 67.4 million registered voters, according to Independent National Electoral Commission data. For 2019, the number of registered voters has risen by a quarter to 84 million, with just over half of them aged 18-35.

The candidate with the most votes is declared winner as long as they have at least one-quarter of the vote in two-thirds of Nigeria’s 36 states and the capital. Otherwise there is a run-off.