Directed by Armenia Kamel and led by Maestro Nayer Nagy, the event comes as part of the Opera House’s New Years and Christmas celebrations and will be held at six concerts starting from eight pm at the Grand Theater.

The Nutcracker ballet has become an enduring part of holiday celebrations thanks to its charming and fantastical tale of the way love can shape people’s lives.

Through the use of dazzling artistry and optical illusions, the ballet tells the story of a little girl named Clara on Christmas Eve who is gifted a Nutcracker doll which she cherishes.

Unfortunately her brother breaks the doll, leaving Clara heartbroken until she falls asleep and has a dream where the Nutcracker comes back to life and transforms into a handsome prince, sending her on a series of fantastical adventures.

The Nutcracker ballet was written by Tchaikovsky in 1891, inspired by a story from French writer Alexandre Dumas who in turn borrowed it from Ernst Hoffmann’s “The Nutcracker and Mouse King”.

It officially debuted on 1892 at the Imperial Opera House in Saint Petersburg.

The ballet is also considered one of the most important classical performances of the Cairo Opera Ballet Company, who presented it for the first time at the Grand Theater in 1993.

Since then the ballet has been presented every December to celebrate the New Year with the same clothes, costumes and music in order to preserve its timeless atmosphere. 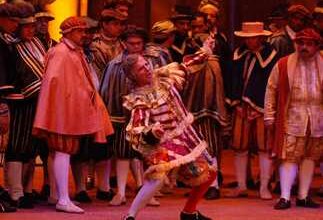