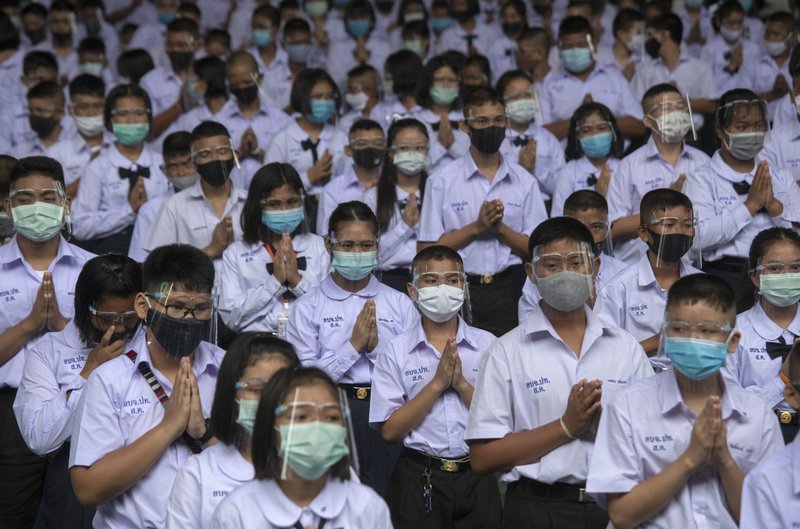 ISLAMABAD — The number of people who have recovered from the coronavirus in Pakistan has surpassed 100,000, about 50 percent of total infections.

The virus has spread in Pakistan at one of the fastest rates in the world since February, and the deaths have jumped since May, when Prime Minister Imran Khan eased lockdown despite warnings from experts.

In Wednesday’s statement, the national command and control center said 100,802 patients have recovered out of 213,469 confirmed cases. Pakistan recorded 41,33 more cases and 91 deaths in the last 24 hours.

Pakistan has sealed off hot spots across the country since last month to contain the spread of virus, saying the country’s economy cannot afford a stricter lockdown.

TOKYO — Tokyo Disneyland and DisneySea reopened after being closed for four months due to the coronavirus pandemic, with hundreds of visitors applauding as they were let in Wednesday.

The two parks have new guidelines, including limiting the number of entrants in three shifts to maintain social distancing.

No handshakes, hugging or photos taken with Mickey Mouse and other characters are allowed.

Though characters greet guests from afar, their signature parades and shows have been suspended to avoid crowds.

Entrants are asked to get their temperatures checked at the gate, sanitize their hands and wear masks while in the park.

Tokyo has detected more than 50 cases for five consecutive days, and on Wednesday confirmed an additional 60. Japan on Tuesday had 132 new cases nationwide for a total of 18,723 with 974 deaths.

MELBOURNE, Australia — An Australian state leader has welcomed “some sense of stability” in numbers of new coronavirus cases detected daily in the nation’s second largest city as more than 300,000 residents prepare to be locked down for a month.

There were 73 confirmed cases in Melbourne in 24-hours to Wednesday, up from 64 reported on Tuesday but less than 75 on Monday.

Victoria state Premier Daniel Andrews says “it is pleasing that there is some sense of stability to these numbers. There is the beginning of some consistency here.”

He said a “significant concentration” of the new cases were in the 36 hot spot suburbs that will be locked down from Wednesday night until July 29 in a bid to halt the spread.

Thousands of officials conducted more than 20,000 tests in Melbourne since Tuesday, going door-to-door and through dozens of testing centers in the targeted suburbs.

Some of the infections were spread from staff who had supervised travelers who had been held in hotel quarantine for two weeks on arrival from overseas.

Andrews says a judge would be appointed to investigate “unacceptable infection control breaches in hotel quarantine.”

He says international flights would not be allowed to land in Melbourne for two weeks because of those breaches.

BANGKOK — Thailand has further eased COVID-19 restrictions, allowing the reopening of schools and high-risk entertainment venues such as pubs and massage parlors that had been shut since mid-March.

It also is allowing in foreign visitors on a controlled basis, limiting entry to those with existing family or work ties, students, technical experts, investors and specially invited VIPs. Scheduled passenger flights to Thailand were suspended in early April.

The number of foreign visitors allowed into the country each day is limited to 200, and they are supposed to travel on repatriation flights bringing Thai citizens home. All returnees, foreign and Thai, will be subject to varying degrees of quarantine.

All confirmed coronavirus cases for the past five weeks have been repatriated Thais rather than cases of local transmission, giving the government confidence to lift restrictions. However, it has extended through July a state of emergency, which critics charge is used to suppress political dissent.

SEOUL, South Korea — South Korea is considering including religious facilities on the same list with nightclubs, hostess bars and karaoke rooms as “high risk” venues for the spread of COVID-19 following a slew of transmissions tied to church gatherings.

South Korean Prime Minister Chung Sye-kyun said during a virus meeting on Wednesday that more than 40% of the country’s newly confirmed infections over the previous three days have been traced back to places of worship.

He pleaded people to refrain from religious gatherings and criticized churches and other facilities for failing to implement proper preventive measures, such as requiring followers to wear masks and sit apart during services.

“If religious facilities continue to be an environment for infections by failing to implement anti-virus measures, it will be inevitable for the government to designate (them) as high-risk facilities and enforce strong restrictions,” Chung said.

High-risk facilities are advised to close or otherwise must enforce anti-virus measures, including distancing, temperature checks, keeping customer lists and requiring employees and visitors to wear masks. They are also required to register visitors with smartphone QR codes so they could be easily located when needed.

MINNEAPOLIS — The University of Minnesota says seven athletes from “multiple sports” have tested positive for the coronavirus.

The Gopher Athletics Department conducted 170 COVID-19 tests during June, and seven athletes tested positive. The school said Tuesday that students who test positive are entered into a protocol and asked to self-isolate. Those students will have access to all necessary resources and food, and will be in daily communication with the university’s athletic medical staff.

Those students will have to undergo additional testing and screening before they can participate in team activities. A team physician also must clear the student.

The university said contact tracing was conducted, and any person who was potentially exposed was asked to quarantine to help prevent spread of the virus.

BEIJING — China has reported just three new confirmed cases of coronavirus, all in the capital Beijing where an outbreak last month appears to have run its course amid intense testing and case tracing.

No new deaths were reported Wednesday, leaving the toll at 4,634 among 83,534 cases of COVID-19 recorded since the virus was first detected in the central Chinese city of Wuhan late last year.

The National Health Commission said 421 people are in treatment with another 108 under monitoring for being possible cases or having tested positive for the virus without showing symptoms.

Beijing has begun discharging those infected in the recent outbreak tied to the Xinfadi wholesale food market in the southwestern suburbs.

With 328 cases reported since June 11, Beijing has reinstated some prevention measures, suspended classes for schoolchildren and carried out 8.3 million virus tests among the city’s more than 20 million residents.

She said as of Tuesday there have been over 8,600 coronavirus cases in the state, with over a quarter of those cases identified in the past two weeks. The Oregon Health Authority said 207 people in Oregon have died from the disease.

The state of emergency declaration is the legal underpinning for the executive orders Brown has issued throughout the pandemic, including her orders on reopening Oregon, as well as orders related to childcare, schools, and higher education operations.

Extending the state of emergency declaration allows those orders to stay in effect. She will review and reevaluate each of her emergency orders every 60 days. Brown said this extension will last through Sept. 4.

CALEXICO, Calif. — An official says a farming region on California’s border with Mexico has sent hundreds of patients to hospitals outside the area in recent weeks as leaders accept Gov. Gavin Newsom’s recommendation to backpedal on reopening its battered economy.

The Mexican border city of Mexicali has taken its own measures to combat the virus, including a checkpoint for motorists entering from the US that created a seven-hour backup on the US side on Saturday.

WASHINGTON — Dr. Anthony Fauci said coronavirus cases could grow to 100,000 a day in the US if Americans don’t start following public health recommendations.

The nation’s leading infectious disease expert made the remark at a Senate hearing on reopening schools and workplaces.

Asked to forecast the outcome of recent surges in some states, Fauci said he can’t make an accurate prediction but believes it will be “very disturbing.”

“We are now having 40-plus-thousand new cases a day. I would not be surprised if we go up to to 100,000 a day if this does not turn around, and so I am very concerned,” said Fauci, infectious disease chief at the National Institutes of Health.

Fauci said areas seeing recent outbreaks are putting the entire nation at risk, including areas that have made progress in reducing COVID-19 cases. He cited recent video footage of people socializing in crowds, often without masks, and otherwise ignoring safety guidelines.

Image: Students wearing protective gear to help curb the spread of the coronavirus pray before class at the Samkhok School in Pathum Thani, outside Bangkok, Wednesday, July 1, 2020. Thailand has begun a fifth phase of relaxations of COVID-19 restrictions, allowing the reopening of schools and high-risk entertainment venues such as pubs and massage parlors that had been shut since mid-March. (AP Photo/Sakchai Lalit)

Worst virus fears are realized in poor or war-torn countries