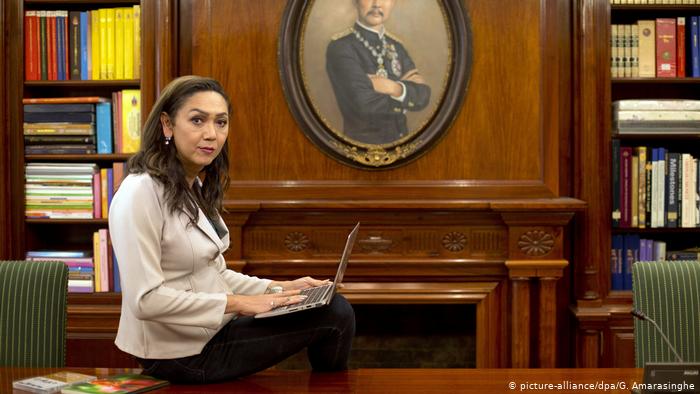 On March 24, Thai voters will elect a new parliament, which is set to end five years of direct military rule. 52-year-old Pauline Ngarmpring, a transgender candidate, is contesting the polls and representing the Mahachon Party. In fact, Ngarmpring is one of three candidates put forward by the party for the post of prime minister. She is, however, not considered a front-runner.

In a DW interview, Ngarmpring says she wants to bring hope to the marginalized and create political space for future generations of LGBT people.

DW: Compared to other Asian countries, Thailand is viewed as having a more open approach toward the LGBT community. What’s your take on this?

Pauline Ngarmpring: People around the world think that Thailand is a sort of paradise for LGBT people but in reality it is so difficult for people to come out of the closet. I went to the United States to transition because in Thailand they would have looked at me as if I was a freak.

Prior to my transition, as a man, I was a CEO and sports promoter, well known in the world of Thai football. I was afraid that people on the street would recognize me and I would be embarrassed. That’s why I left for the US, to get away from Thai society.

But eventually you came back to Thailand.

Only because the media found me. At the time, I just wanted to keep a low profile and disappear. I didn’t think people would recognize the new me. But then, in July 2017, a media outlet ran a big story on my transition in America. That was when I decided to go back to Thailand, to explain my story to society and to tell it from my point of view. I wanted to encourage people and give them the strength to be themselves.

What were the reactions to your transition after you returned to Thailand?

I knew I was going to be under a lot of pressure. Some people laughed at me and made fun of me. But when you respect yourself enough, you don’t really care about all the negativity. The more I talked about it, the more understanding people became.

I suffered a lot in my life but I am proud about where I am now. After I came out publically, people started sending me messages, saying that I inspired them to transition and that made me happy. Of course, sometimes I get comments like “You used to be a good-looking man” but people respect me now as Pauline.

Why did you choose to pursue a career in politics?

Back in the past when I was a man, I was interested in politics because of my professional background in journalism. Then I worked in football which involved dealing with a lot of politicians. I closely followed the political situation in Thailand and it actually made me a bit depressed because it could be so much better.

Some parties invited me to join but I was not complete at the time. I had the mission to transform into a woman. After I became Pauline, I was invited to join the Mahachon Party and this time I was ready to enter politics because I was complete. I didn’t have to worry about anything because I was myself. But I never thought about becoming prime minister or anything, I just wanted to be beneficial for the people.

What do you hope to achieve politically for the LGBT community?

The Mahachon Party strongly supports human rights. So, one of the main things I would like to accomplish is to make people equal in the political sense. I would also strive to provide them with equal economic and social opportunities. That includes recognizing LGBT as human beings and giving them the same rights as everyone else, like being able to marry and properly identifying oneself.

Right now, for example, we cannot change our gender identity and that makes life very difficult. In hospitals, people call us “Mr. with woman identity,” that is so embarrassing. And the same problem occurs when you travel abroad with a passport still referring to you as “Mr.”.

Read more: Will Thailand’s military step aside after elections?

Do you think you actually have a shot at becoming the next prime minister of Thailand?

Frankly speaking, I don’t have the chance to win this time. That’s partly because I joined the party only three months before the election. I hope we get six or seven seats in the parliament, which would already be a good start.

Something makes me confident though, that in the future I will get more time to prepare and to actually make people understand my concept. I believe I will be able to make them realize the advantage of having a transgender as prime minister. I would represent a more diverse group of people in society than a regular male or female candidate.

I am contesting the elections for the sake of future generations and seeking power is not my goal. Power is just a tool in this case. I just want people to be more open toward the LGBT community and, in a way, I have already achieved that.

Imagine the media hadn’t published a big story on your transition and you hadn’t come back to Thailand to enter politics. What would you be doing now?

I was supposed to be a chef. In the US, I worked in the kitchen of a restaurant. It was very hard work but I love cooking. I didn’t want to be an executive in a company anymore, and that’s why I started to learn how to cook. I learnt how to prepare Thai food, Japanese and other international cuisine. So if I hadn’t entered politics, you would have found me in a kitchen now.

Pauline Ngarmpring used to be a well-known figure in the world of Thai football. After she became a woman, she entered politics and is contesting in the upcoming Thai elections.

The interview was conducted by Ann-Christin Herbe. It has been edited for clarity.

There are no gay people in Malaysia: Tourism minister